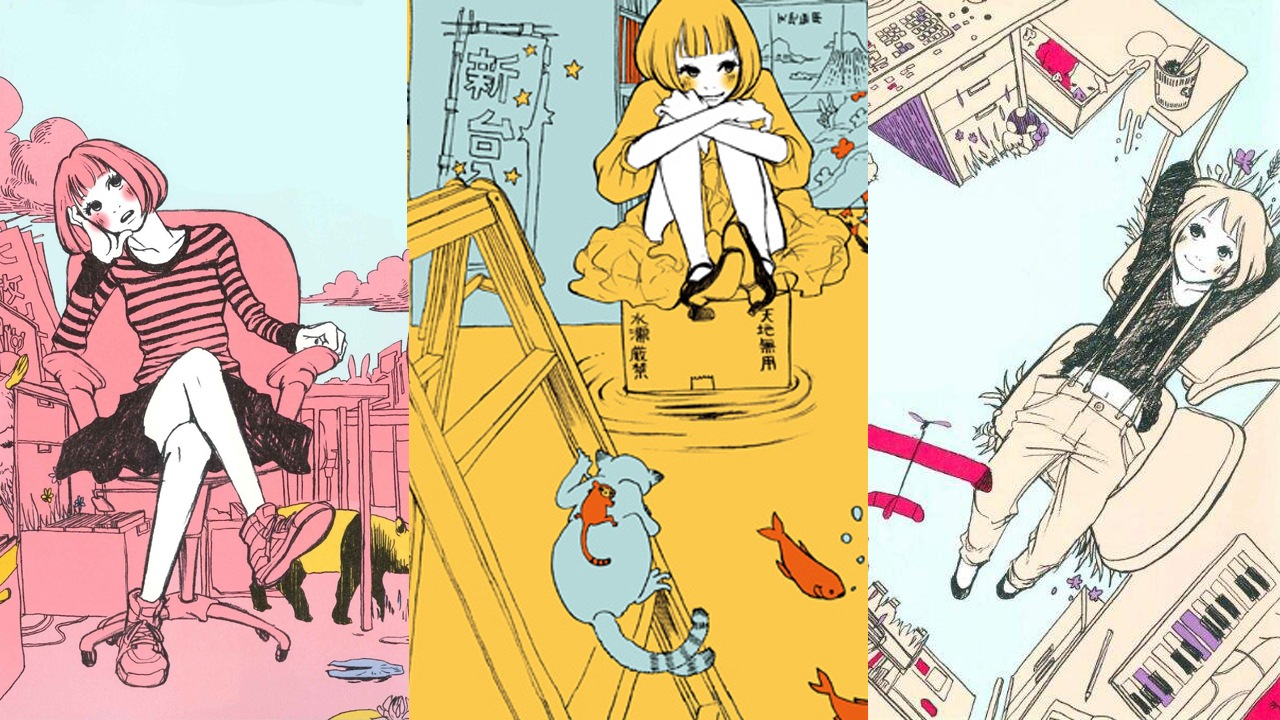 I’m stuck on Josei Manga. It’s a manga genre that’s become more and more relevant to me as a twenty-something woman still navigating the waters of finishing college, matters of the heart, and my future career. When I wrote A Love Letter to Josei Manga, there was one manga that I wanted to include on the list that I also loved but ultimately had to cut it from the lineup. I’m talking about Nemu Youko’s 3 A.M. Dangerous Zone and here’s five reasons why you should give it your attention. Life after college. Life as an adult. Adult relationships. Excuse my phrasing but, real life kinda sucks. Momoko is a young woman, a recent design school grad, who dreams of becoming an illustrator. She finds herself working at an lousy office where she helps design the visual aspects of what one would see in pachinko parlors. It seems like she is exposed to secondhand smoke every time she takes a breath and her coworkers are an eccentric bunch — one even likes to ceremoniously take off his pants and work in his underwear, which isn’t a pretty sight. Also, a certain coworker, the salesperson, whom I originally thought was the boss, is always in a bad mood. ALWAYS.

Momoko constantly finds her work load increasing so she pulls all-nighters at times. She’s tired. She’s overworked. She never gets much sleep. She sees her current boyfriend, whom she’s been drifting away from, walking hand-in-hand with another girl from afar and doesn’t have it in her to approach them. She feels no comradeship with her coworkers. And she’s starting to seriously rethink all the choices she made in life up to this point. 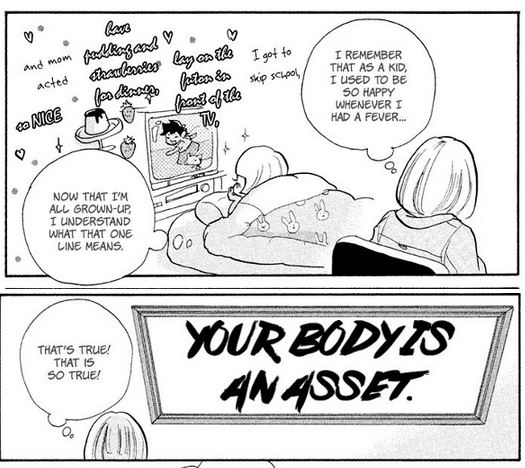 There’s an important lesson that Momoko learns while at this job: yes, this very place that overworks her and leaves her feeling like she wants to quit every week. After an emotional outburst belittling the company, she is reprimanded by a coworker. Embarrassed and feeling like she’s the weakest link, she flounders around for a bit but with reflection on her part she begins to understand.

“Don’t Look Down on Your Job…”

Don’t look down on your job because if you think about it, your job is an extension of you. And while not every job is ideal or the “dream job”, it’s still a stepping stone in where you want to be. In Momoko’s case, she’s still young. She won’t always work there. It serves a greater place in the greater scheme of things to teach her a few lessons, help her grow up and put her in the path to meet people she needed to meet. Think about it–all the jobs you ever had–you learned something from them, right?

Even if that lesson was as simple as teaching you to be more considerate to people working retail during Holiday seasons (been there, done that!), learning better money management (yeah, that too) or that how important it is to not be working Saturday mornings or Holidays (UGHHHH BIRTHDAYS TOO), you learned something. And if noting else, that job earned you money to pay your rent, to feed you or take care of some other expense that carried you along the way to where you are now. Honestly, it’s hit or miss because it’s such a short manga series. I’ve been told by someone I recommended the manga to that they dropped it because it was “too slow”. So, the pacing may very well turn you off. In my case, I stuck with it. If you’re like me you may feel suffocated. It was like I felt the overbearing burden of responsibilities that Momoko has to bear creep off the page and remind me of all the things on my plate that I haven’t done.

You may giggle at the tiny bits of joy that find her as she laughs at something outrageously simple as she’s sleep deprived, sitting in the office in the early hours of the morning.  You may feel your heart wrench at the times she stares off into space, sitting in her chair or walking home alone as loneliness creeps in. You may see her indecision dance down  a page through the panels and feel irked by it. You may find yourself holding your breath as she glances at her phone.

And romance aside this is still a story about Momoko.

Is she doing this “adult-ing” thing right? (Something I still ask myself on a regular basics–the last time? When I thought about my credit score randomly when I was watching an episode of Adventure Time. Like would I be able to put a down payment on a treehouse near Finn and Jake or even dream of a cozy cottage in the upscale part of the Candy Kingdom?) What is she doing with her life? What and who is she settling for? Can she push herself out of her comfort zone? What should people expect of her? Can she be someone who can be depended on by others? What exactly, does she want out of life?

4. There’s so many hilarious moments his manga for sure. I promise you it ‘s not a Debbie Downer the whole ride.

This manga has moments of sheer hilarity that will just take you by surprise. I was snort laughing. It’s legit. For those that don’t know me or don’t know me well, if I’m snort laughing, I am amused. Greatly entertained at the least. And then…there’s this panel: What sets Josei apart from Shojo are some of the adult, er, more mature themes. Momoko doesn’t set out to fall for someone new. But it happens. And once that damn proverbial cupid arrow hits you, there are things you may find yourself craving. What about intimacy? Who do you feel comfortable enough to let down your walls around? Fall asleep next to? What about companionship? Someone who makes you laugh on days you want to cry? Someone who instantly knows how to take away the furrow out of your brow when you want to fuss at the world? But with romance comes complications. People (read: men) aren’t perfect no matter how much the “Prince Charming” or “Nice Guy” and other male tropes society endears women early to look for and cherish. She finds that people are flawed and people take work. Herself, even. Giving someone your heart can hurt. Misunderstandings can occur and create valleys and deserts full of distance between people. Jealousy can turn up in bystanders and that too, can create unnecessary drama. REASON #6: There’s a drama adaptation! YUP. A live action adaptation. LORDT. I know I shouldn’t be adding any new dramas on my list cause I have quite a few to finish but….I’ve found the first episode here. Apparently it was originally only broadcasted via smartphones in mini episodes but now is available for your viewing pleasure and….wait–there’s a “manga” version too?

Have you read 3 am Dangerous Zone already? Did you hate or  love it? Did the pacing bore you, like it did the person I recommended the manga to? What about the sequel, have you read it? Can you tell me where to find it? Do you have any manga titles I should be reading? Is Honey and Clover really live up to the hype? Let me know in the comments or on Twitter!