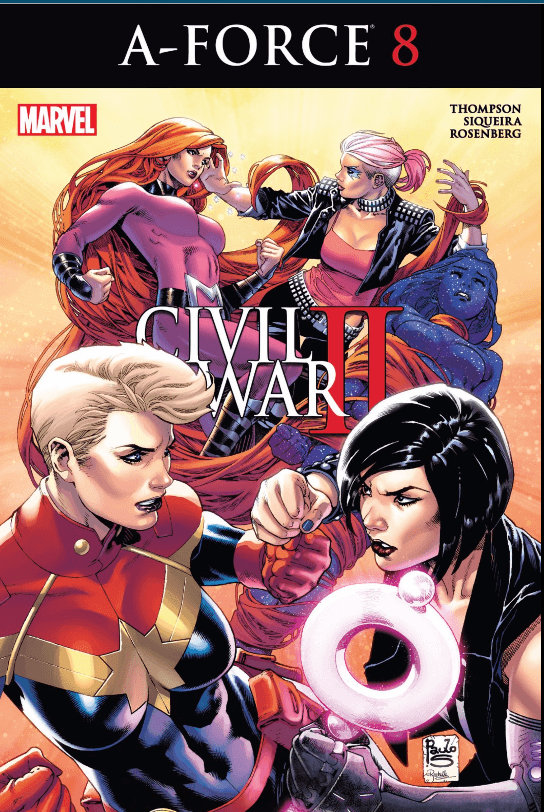 With this issue, the A-Force team gets pulled into that little family feud/event called Civil War II. It works quite well, especially as the nature of the conflict — pre-cogs vs. free willies — fits well with the internal divisions already present in the team. Captain Marvel and Medusa are natural Lawful Good types, as opposed to Dazzler and Nico who are much more Chaotic Good. (If you’re not familiar with the classic D&D archetypes, read up.)

Now I asked at the end of my Issue 7 review, how the ever-talented Thompson was going to handle the She-Hulk in a coma thing. You remember that, from Civil War II, #2? 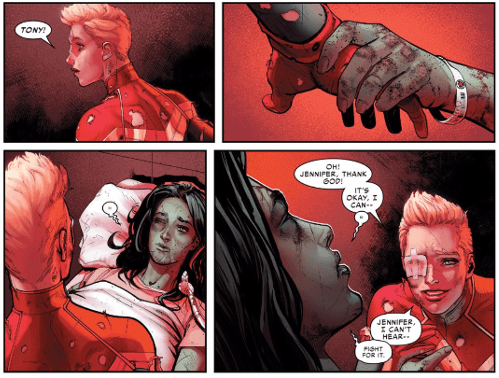 Well, how Thompson handles  it to make that scene, that whispered bit of conversation, the core of the fight that erupts between the remaining members. What did She-Hulk mean by “Fight for it”? And how does it relate to the latest news from no-one’s favorite person Ulysses: the news that Nico will kill a woman named Alice? To end the ensuing philosophy fight, Nico runs away, in the midst of appropriate references to her having been a Runaway all along. (By Bast, comicbook nerds love these inside references!) She lands in Colorado, and steps out of her safehouse and directly into… 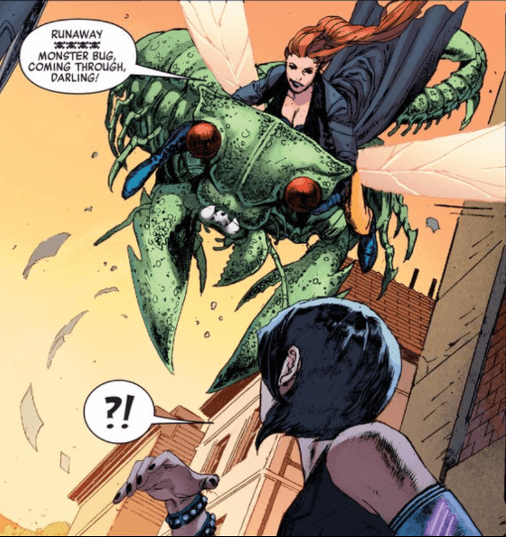 That foul-mouthed red head on a giant insect is Elsa Bloodstone, monster-hunter of the highest order. Don’t worry if you don’t know who she is, I had to look her up. Elsa Bloodstone, according to the Marvel Wiki, gets her ability to defeat monsters from the Bloodstone she inherited from her slightly crazy father, (also named Ulysses!). Her brother is Cullen, a fact which comes up because Cullen and Nico know each other from Murderworld (See! another comic book nerd reference).

What follows is a fast and gooey team up between Elsa and Nico as they fight their way through the horde of oversized bugs that have taken over the small town.

This issue brings us the art of Paolo Siqueira and Rachelle Rosenberg. Their style is NOTHING at all like Caldwell and teams’ from previous issues, and returns to the candy-coated look of Molina. I loved Molina’s work on the first arc, and I think that this style will be well suited to fighting giant bugs.

One last reference, because I can’t walk away without mentioning this: 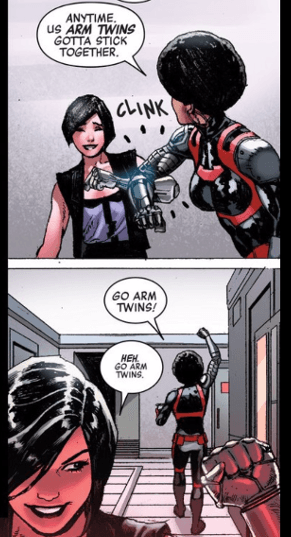 Misty My Afro is Better than Yours Knight.

So many questions! You’d think this was the beginning of a new arc or something?

PS: Quick shout out to the letterer, Cory Petit, who drew in little skulls and crossbones for all of Bloodstone’s curse words. Fuck yeah.

What happens next? What happened before? Read all of our A-Force reviews, so you’ll always be ready for the next issue.