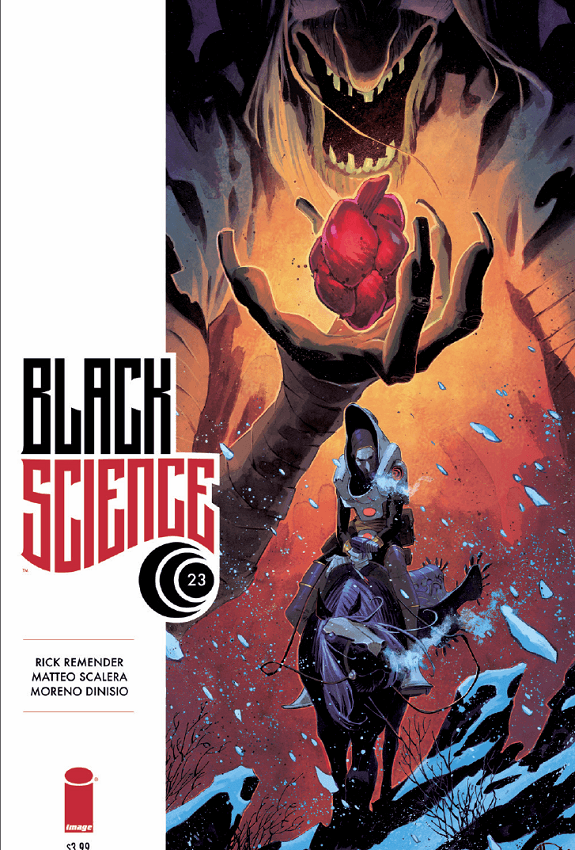 Remember how I said that I wasn’t particularly sure about the slight shift of comedic detail with Black Science, how it felt like a bit of sitcom with it’s jokes? So… maybe it’s taken one issue, but I think it’s grown on me. It’s probably the absence of the slap stick physical comedy that the previous issue had, but the dialogue and humor worked extremely well in this issue when you realize just how dark and grim the scenario Grant finds himself in. Grant, having royally screwed things up with his daughter and the great peace between nations she was about to deliver, embarks on a seemingly impossible quest with a trusty steed deep into the woods to retrieve the Oxen Heart, the mcguffin that will truly bring peace to the valley.

What works so great is the humor-fueled speech patterns coupled with the Grimm Fairytale homage of the dark castle, with an evil witch, deep in the dark woods. It hits every nostalgic bone while still feeling very steeped in the Black Science world (or worlds rather). Of course, there are twists and very clever turns in the story, but the quest puts Grant in the corner of making a pretty tough decision that serves as a cliffhanger and a legitimate quandary for the hero who has a very specific quest in mind. This book is the sci-fi odyssey that we need and continues to keep a great story entertaining and full of surprises. 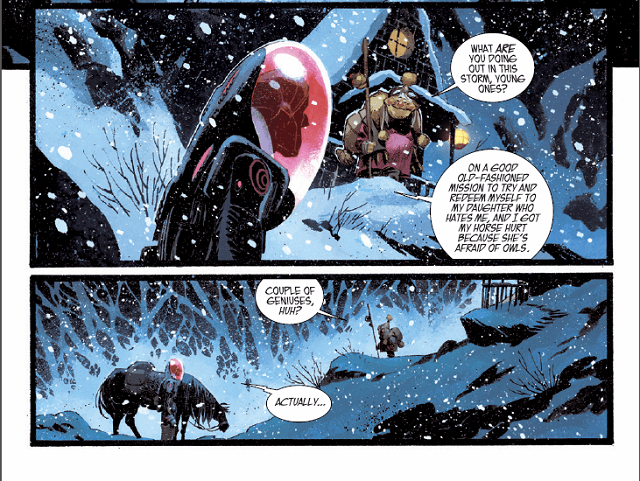 Scalera does some great work, especially in short bursts this issue. Whether it’s Grant and his scared horse or the reveal of the witch, the atmosphere and scale works so well for this story. While Scalera usually thrives in a kinetic story, he continues to impress even in the more dialogue heavy issues like this one. The two creators are really in sync and continue to move this story along.

The second issue of this new arc substituted more genuine and naturalized humor for the slapstick we saw in the previous issue and it was better for it. A nice twist on a Grimm fairy tale delivers and leaves Grant in yet another perilous situation.