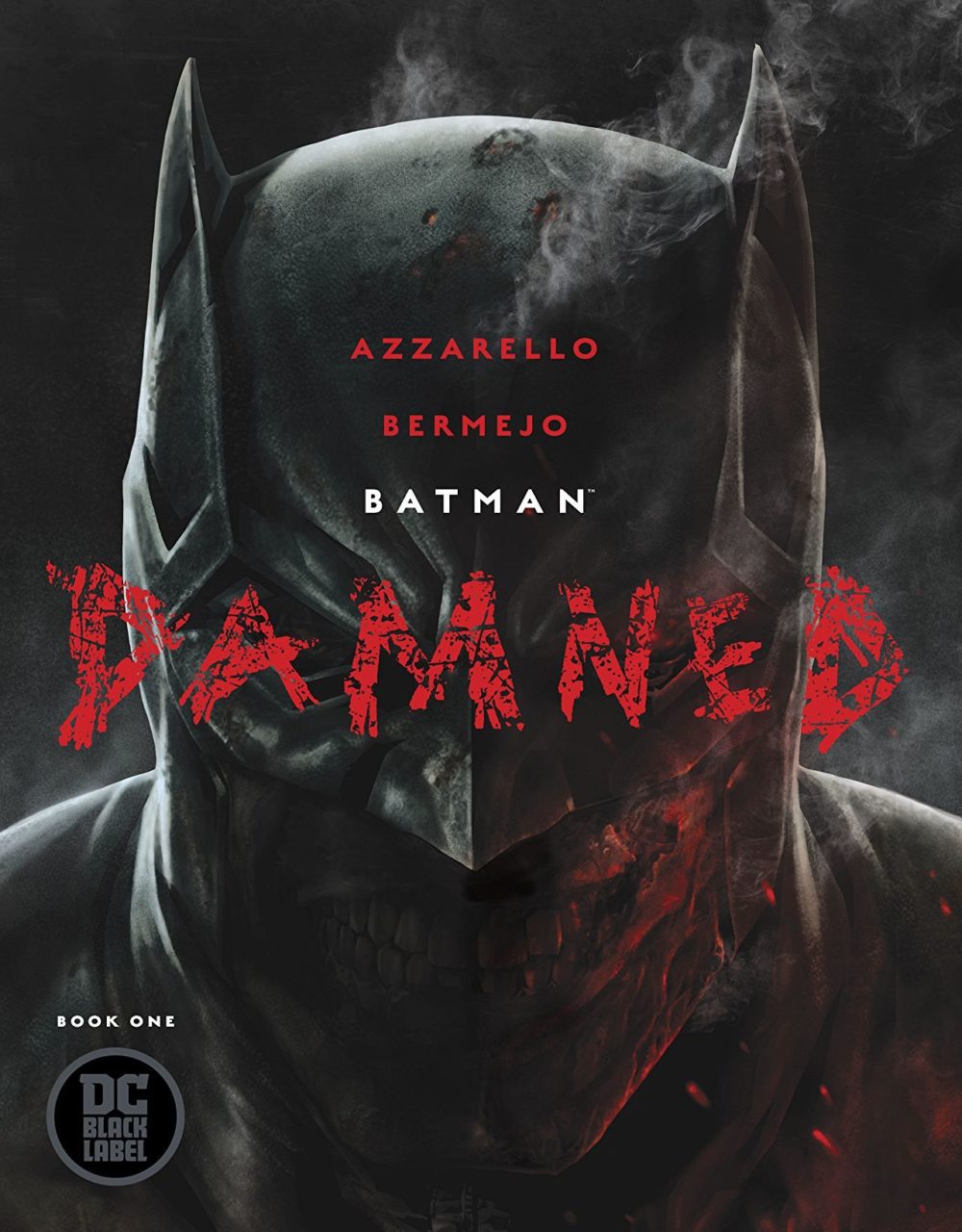 In many hero versus villain tales, the use of light versus dark is showcased as a linear perspective that tries to prove that these sides cannot coexist: one side is always attempting to mute the other. This tactic can be found in various parables, some of which belong to different belief systems. Which raises the question: “At what point does each side become muddy enough where reality seems monotonous”? In reality one cannot attempt uniformity without exploring nuances when one attempts to mute one side. With that, Batman Damned #1 introduces the various ways that one can “unmask the darkness” and how gray scale affects the “God” complex that’s featured throughout the panels.

At the beginning of Batman Damned #1, readers are given various concepts that are often pitted against each other, posted against a heart monitor. This seemingly simplistic concept serves as an outline for the rest of the book, as the introduction of a “thin line” that propels readers into a chaotic scene. 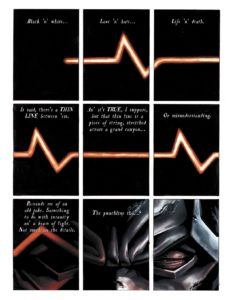 The rise and fall of a heart monitor transforms to blood rushing and Batman passed out on a stretcher.

Bodies begin to hover around him and of course, the question behind unmasking him arises. What I appreciated about this scene is how Azzarello compares duality and revelations. Batman, a perceived hero for most, is also a symbol of fear in Gotham. Unmasking this mysterious person will not only let loose his identity but the history that travels along with it. The introduction of duality between curiosity and purpose takes into account that revelations have the ability to trigger demons. This is an excellent way to introduce flashbacks as the stage for the mental state of the Caped Crusader.

These flashbacks remind folks that people are the product of their past realities. Revelations cannot come to fruition without first analyzing the past self. Using Bruce’s relationship to death and his mental health later reveals his own darkness when he is notified about the Joker’s death. Azzarello reveals in Batman Damned, that the acceptance of inner demons causes murkiness in the binary between light and dark. Watching him relate the rise and fall in the heart monitor to the influx between Wayne’s relationship to the shadows is a great introduction to the analysis of the initial tragedy. 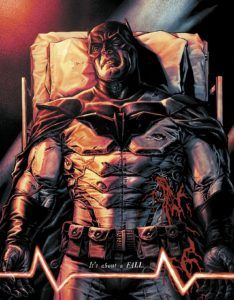 What Did You Lose In The Fall?

By using gruesome metaphors to religion as leverage to thrust the reader into the darkness with Bruce, we begin to see a loss in a savior/God complex. What Azzarello did not reveal in words, Bermejo provides in color schemes and scene movement. The irony begins with Batman needing help. I remember being caught off guard. The splashes of reds, and sharp usage of black formed immediate anxiety in every panel. Red as a symbol for blood and danger is reflected off the face. The red never took the same form. Sometimes it was a harsh swarm, other times it felt like a bushel. Even in the places where Bruce is not bleeding, the red pushed forward an interrogating emotion.

The references to being a fallen angel is a symbolic piece that relates back to the heart monitor. The angel being the light that rises. Darkness being the initial cause of gravity. The shadowing doesn’t hide anything about Bruce. Rather, it highlights the parts we know we are missing. Bermejo masterfully uses these tactics to showcase Batman’s identity beyond what is presented.

What We Could Have Gained

With all of that being said…it was hard to figure out exactly what was going on. Granted, I loved the flashbacks. It was a necessary component to reveal the parts readers often forget in hero narratives; but it felt like there was no story line. Just darkness. The flashbacks took the main role of the storyboard. This could be a tactic for what is to come in future entries of the series, but it felt like something was missing.

I learned where the images derived from. I learned how Batman got like this; but the question “How did Joker die?” did not get answered. “Why are we flashing back so much?” did not get answered. The issue provided great references and metaphorical theories, but it often felt like a showcase. The writing style was phenomenal, but once a path is opened it could be more concrete. Even a broad path with many possibilities would help. I would love to see how each component introduced in this initial entry ties into the next one which comes out in November. This would push it away from the slight biographical stillness and towards a plot-centered format that used previous experiences and metaphors as tools for reader enlightenment.

8.7 Clipped Batwings out of 10
Reading Batman Damned? Find BNP’s other reviews of the series here.