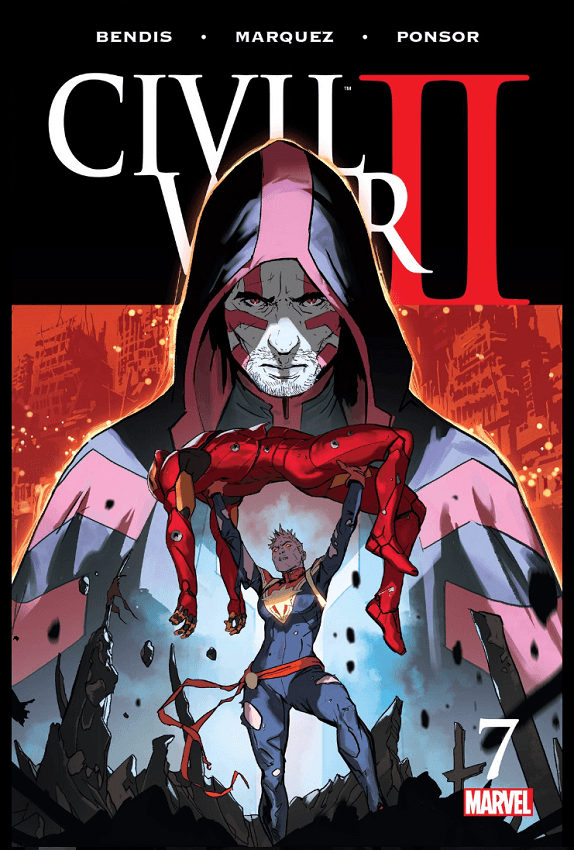 It would probably be too generous to say that Civil War II is finishing strong, because, it isn’t. The last two issues, however, have been better than the ones that preceded, for whatever that’s worth. After slogging through the middle issues of this big event, Civil War is actually a book I don’t roll my eyes reading now. Well, not for the full book anyway. After Ulysses’ revelation that sweet and fresh-faced Miles Morales was going to “This is Sparta” Steve Rogers on the courthouse steps, the first thing your boy Miles did was waltz his ass up to the courthouse steps to prove that theory wrong. Which of course needed the Steve there to prove the theory wrong as well. Meanwhile, Ulysses is so deep in the void that the Inhumans don’t even know how to connect with him anymore as his powers are not only foreign to them, they are manifesting at a rate they can’t control (as if they could in the first place) and have no understanding of.

This time around, Ulysses has a vision that only he can see that brings him face to face with Old Man Logan in a not-so-favorable future state.

The environment and dialogue that incorporates Logan is a cool touch, even if it asks more questions than it answers. And as we barrel towards the merciful endgame, what we don’t need is more questions. Especially when the same ones have persisted. What is the true potential of Ulysses powers? How do we know what’s true and what isn’t? Actually, no, the better question is, “when” do we know what’s true and what isn’t. And if he just predicted something wrong, then why should we be invested in him predicted the big bad thing that he’s so urgent to stop now?

The other major problem, as it has been from the beginning of this book, is Carol. There are a lot of ways you could interpret Carol Danvers through her many iterations and different writers. ‘Borderline fanatical’ probably isn’t one of them. Yet, through all the bad shit that has gone down since Ulysses once had a vision, Carol has still not wavered from her approach, even watching numerous lives be taken. The suspension of disbelief probably expired a few issues back and at this point, it’s just hard keeping an interest in her motivations.

So is this a bad issue? No. Most of the problems I have with it aren’t necessarily confined to this issue and are problems that have plagued the book from the past. The Spider-Man / Captain America conversation is well done and the art by David Marquez is pretty incredible for this issue. All the scenes are handled with an expert craft, from the dialogue heavy moments, to the wasteland with Logan to the big action scene at the end of the book.

Civil War II #7 is actually a pretty good individual book, it just has to carry the weight for some inconsistent and unfulfilling aspects of the story. If the book can end at the caliber that the last two issues have, then it will have ended in a much better place than it started. And considering how low this book has felt at times, that would be a win.

Reading Civil War II? Catch up on other reviews of the series here.