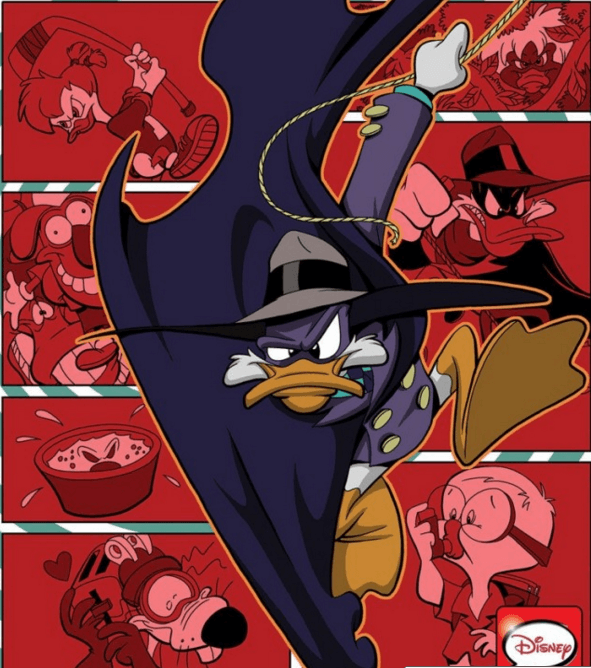 If you’re not a comic book reader or if you find yourself stuck in that comic book limbo that we’ve all been in, then allow me to forcibly yank you out of it. Allow me to show you the Terror that Flaps In the Night. The surprise in your cereal box… Darkwing Duck! If you couldn’t tell by that shimmering soliloquy I’m talking about the new Darkwing Duck comic book which had its first issue in April, entitled “Orange is the New Purple.” This comic book obviously follows everyone’s favorite crime fighting duck, Drake Mallard (Darkwing Duck) as he defends the city of St. Canard from devious, devilish… uh, delinquents.

Here’s the synopsis: “The Terror that Flaps in the Night is back in this all-new, ongoing comic series! Megavolt, Darkwing Duck’s most electrifying nemesis, has been defeated once again, and is now locked up in St. Canard’s new ‘escape-proof’ prison. But is this all just part of a much more dastardly plan?” This comic book has the feeling of the already amazing TV show, and if you remember everyone’s voices like I do then you’ll have an even better time. All of the characters we grew to love (or hate, depending on how you feel) are back. You know like Launchpad McQuack, who still doesn’t have his drivers license, Gosalyn Mallard who is his adopted daughter (a VERY good story of how he adopted her is in the show and you should try to find it) and all of the villains that you remember and even some that you don’t.

Darkwing Duck actually had an impressive amount of villains that I never really noticed. That’s probably because I was too busy trying to find out where Negaduck hid his chainsaws all the time. This comic book is pretty amazing and I was sold the moment Darkwing said, “Once Again, St. Canard’s Dauntless Defender of Decency Derails Another Devious Degenerate’s Deranged Design.” That line brought back so much nostalgia and good feelings.

So go out to your local comic book store and pick this one up because I definitely will be every month, and you trust my judgement right?