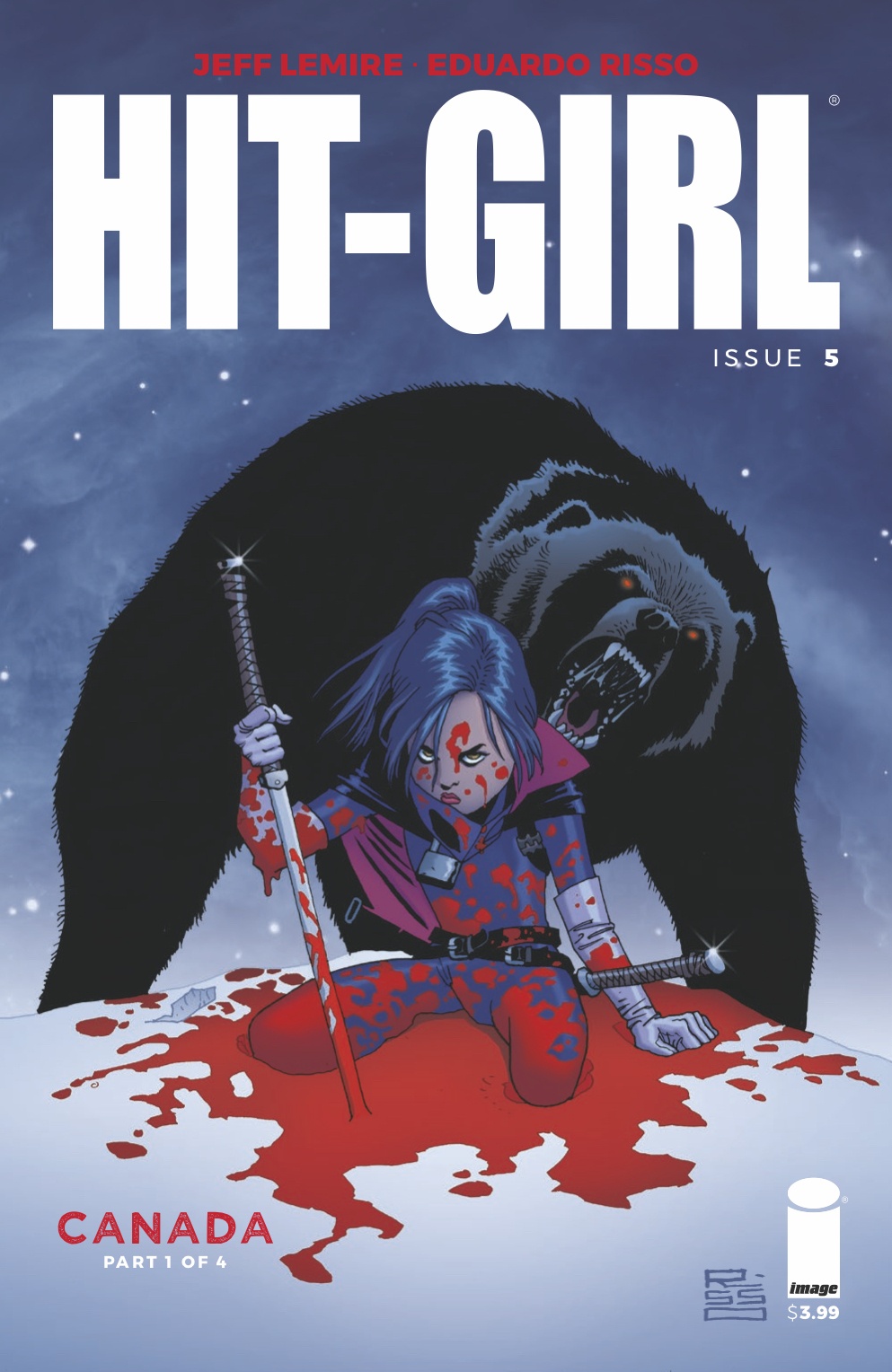 “What Kind of language is that for a little girl to be using?”
“I’m from New York. Everyone talks like that there.”

Everyone’s favorite tween angel of death returns with a fresh arc, creative team, and hunting grounds. Following the Colombian blood opera by Hit-Girl creator Mark Millar to kick off the new ongoing series, Jeff Lemire and Eduardo Rossi take the reins for an ice cold tale of vengeance. The new team slides into the material like a hot katana, mastering the voice and tone of Mindy McGready while adding a fresh sense of danger and atmosphere in the Great White North. 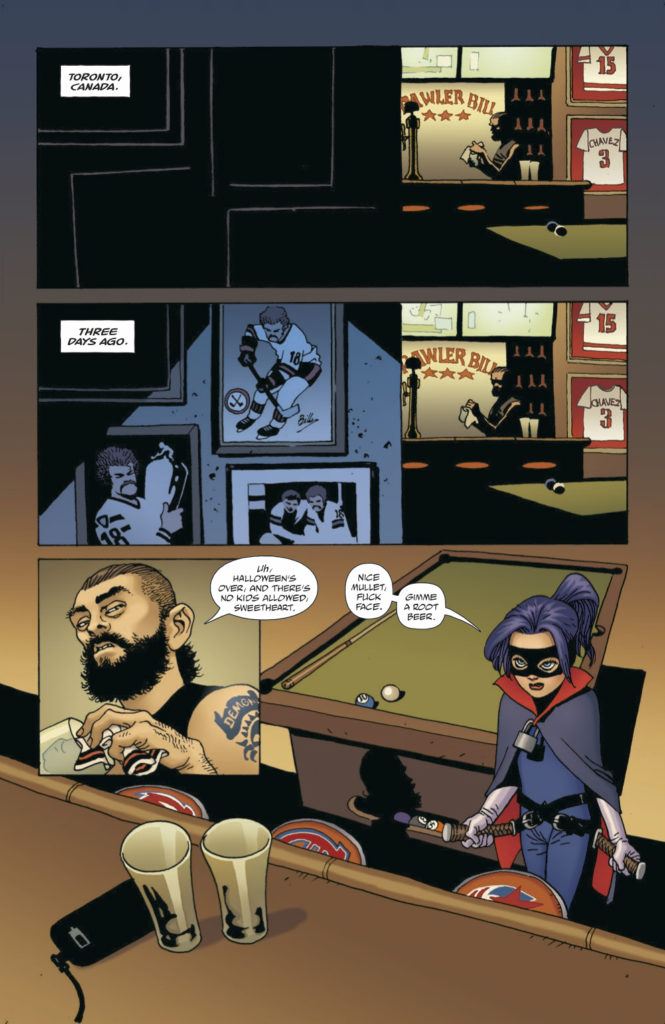 Part One of the “Canada” finds Hit-Girl on the trail of Billy Baker for trafficking heroin. After shaking down a source in Toronto and getting into bar brawl where she gets savage with a hockey stick, Mindy is forced to head even farther up north to catch her prey. She eventually tracks him to Kashechewan, a place so remote that it can only be reached by motor sled. What Mindy hopes to be a simple “kill and go home” job takes a quick turn when she falls into a bear trap and the forces of nature begin to turn against her.

Cooler than a Polar Bear’s Toenail

Timing is everything in Lemire and Risso’s Hit Girl collaboration. As a great narrative device to drive the mystery and action forward,  this issue unfolds both backwards and forwards. Lemire’s script adeptly introduces Mindy in a terrible situation, takes a step back to reveal how it happened, and by the time we return to the present, the peril escalates and leaves us with a beastly cliffhanger. This narrative technique lets the actions speak for themselves as the dynamic and fluid art of Russi contrasts the ominous Northern lights of the Canadian landscape against Mindy’s Takeshi Miike-level violence. The economy of dialogue and careful pacing allows for the most impacting images to be relatively simple – Mindy extending her tongue for a snowflake and Mindy in her element, silhouetted behind a barrage of shots fired and bodies slain. These images resonate so much because they remind us of two things – Mindy is both a child and a no-limit vigilante. 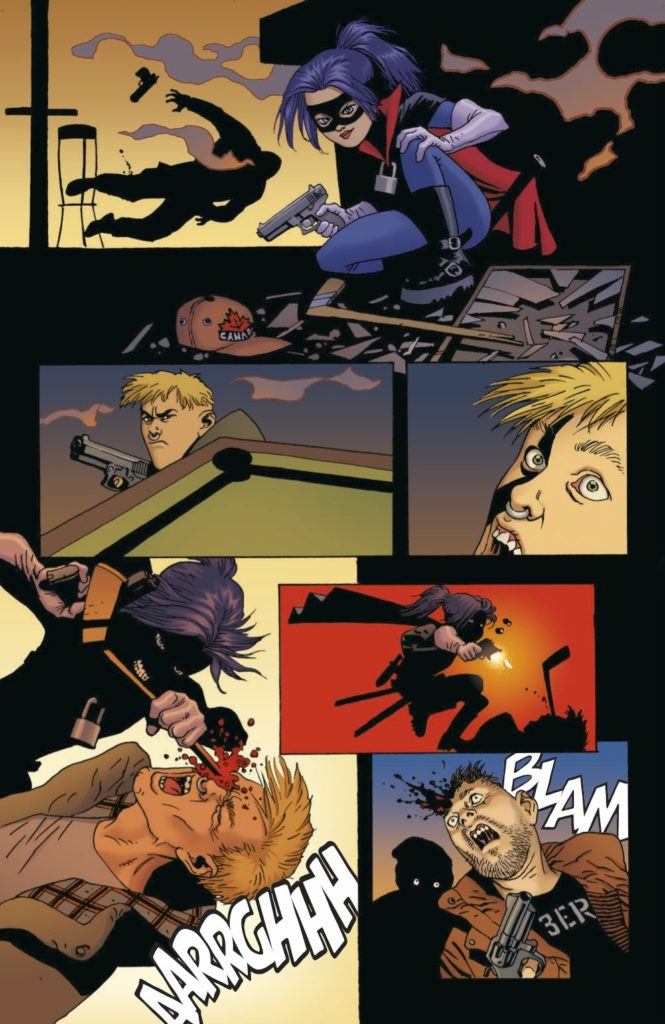 Three Hundred Percent, yes.  Mark Millar’s vision for the “Hit-Girl” series is a grand curation of dream creators adding their take to the character’s mythology. Reportedly, three years of stories have already been commissioned, so this is just the beginning. In her own right, Hit-girl is an iconic character with a complexity and personality that can inspire endless stories. As long as Mindy can avoid any stray Wolverines in the Great White North, this arc from Lemire and Risso is on track to add another distinct impression to the bloody legacy of Lady McCready.