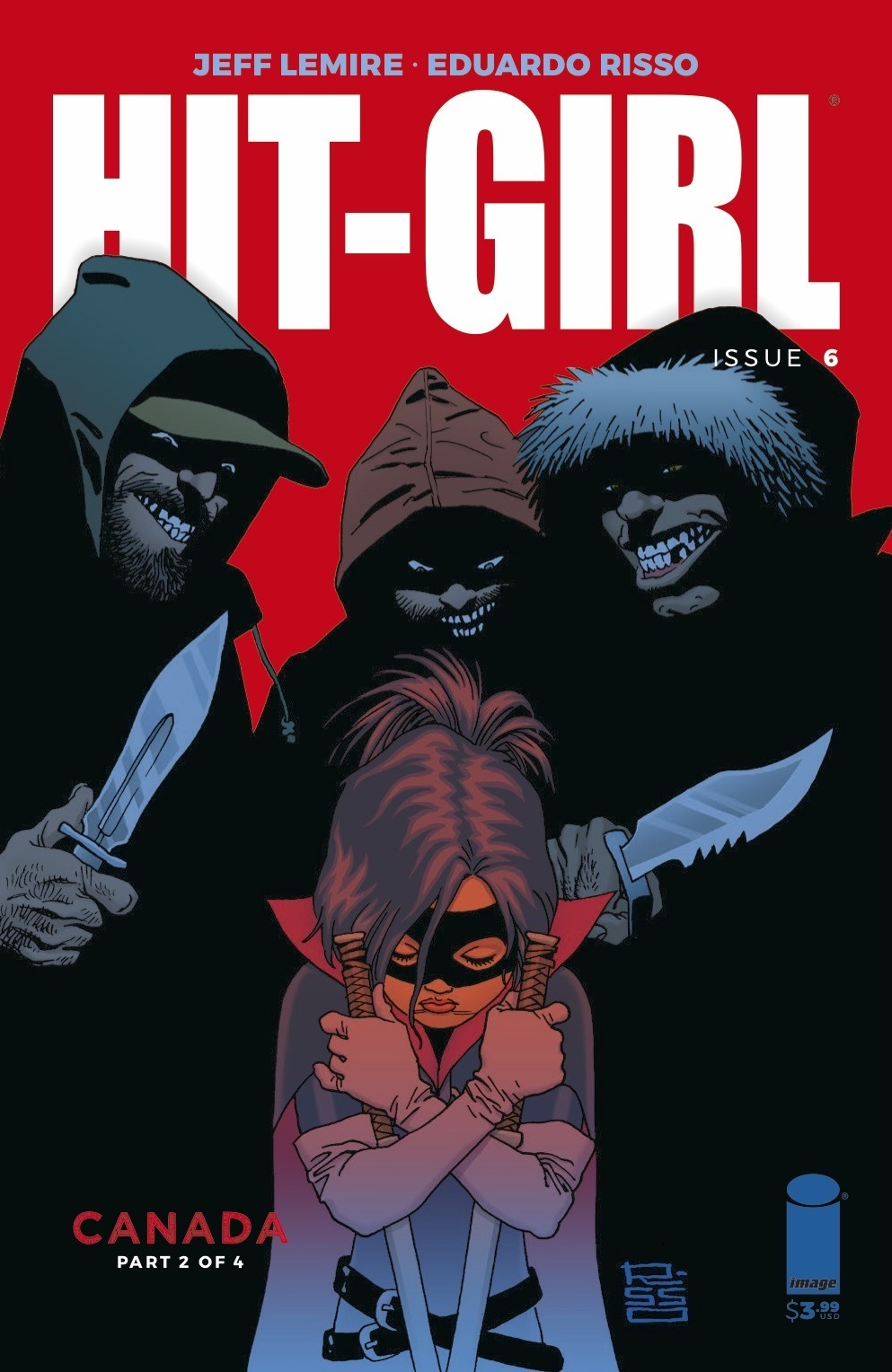 “We’re hunting a twelve-year old girl in a mask.”

The Great White North is no place for a trash-talking tween from New York City…or is it? The second issue of the second arc in Millarworld’s “Hit-Girl” revival is one part hypothermic fever dream and two parts Fargo meets Punisher.

When a old hermit living in the woods helps Mindy after she is caught in a bear trap, the tween vigilante must silence her own violent ego in order protect them both from the retaliation of her killed target’s father. 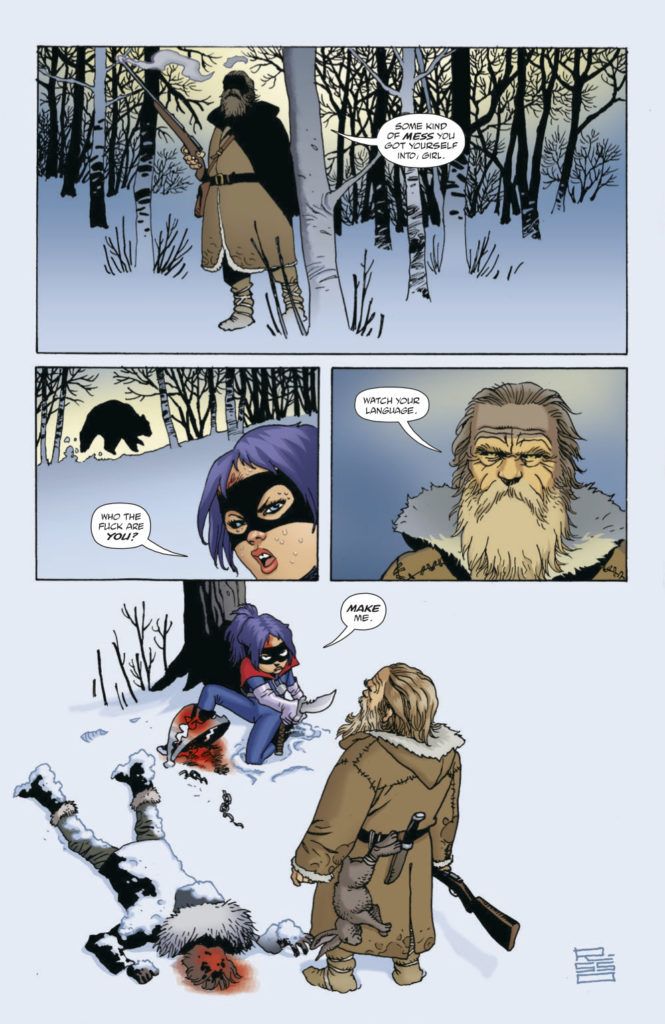 What was supposed to be an easy trip up North to whack a drug dealer named Baker turned into a trap…literally.  After Mindy takes her out her target, she accidentally steps into a bear trap hidden in the snow. Clearly out of her element, Mindy is almost eaten by the very bear for whom the trap was intended.  She is saved in the last moment by a haggard hermit hunter. Equal parts stubborn and self-assured, Mindy tries to refuse the man’s help, but nearly collapses and loses consciousness.

The man takes Mindy into his cabin, allowing her time to sleep and heal. Mindy, alternating between reality and her own fever dream, receives advice from her personal Obi-wan, Big Daddy.  Projecting her own desires of father-daughter reconciliation and connection, Mindy believes that she sees another girl about her age in the cabin of the old man.  She assumes the girl is his daughter, but when she mentions it to the old man, he reveals that his daughter died years before.  While Mindy recovers, the father of her murdered targets assembles his own drop squad of Molson Ice drinking Canucks to merc Hit-Girl once and for all. 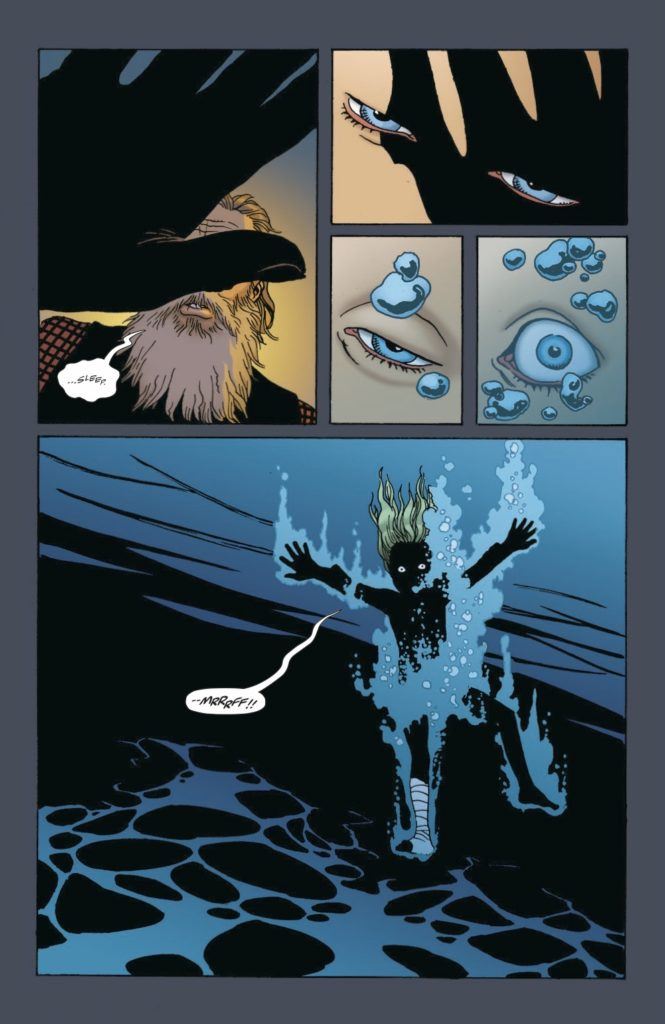 Out of Her Element

The series is unquestionably a great read.  Jeff Lemire weaves a cold tale of vengeance and family ties as ‘the Mindy’ becomes ‘the hunted’ in a Canadian snow-covered forest.  Her street smarts and urban guerrilla tactics cannot save her in this environment, so this storyline presents interesting challenges for Mindy to grow as a character.  Most poignant is the scene that alternates between her own delusion and reality as Big Daddy appears to her in order to warn of the “bad men coming.” Even in the moments of stillness rather than violence, artist Eduardo Risso renders dynamic expressions and detailed renderings of environments and locations that make the panels percolate off the page. You feel the art, smell it, hear it . . .rather than see it. The duo of Lemire and Risso are a fun team to watch.

Great book? Yes. Should you read it? Yes

The real question is: When is Mindy droppin’ a mixtape? Her foul mouth should not be wasted on helpless old people and her victims.

Reading Hit-Girl? Find BNP’s other reviews of the series here.