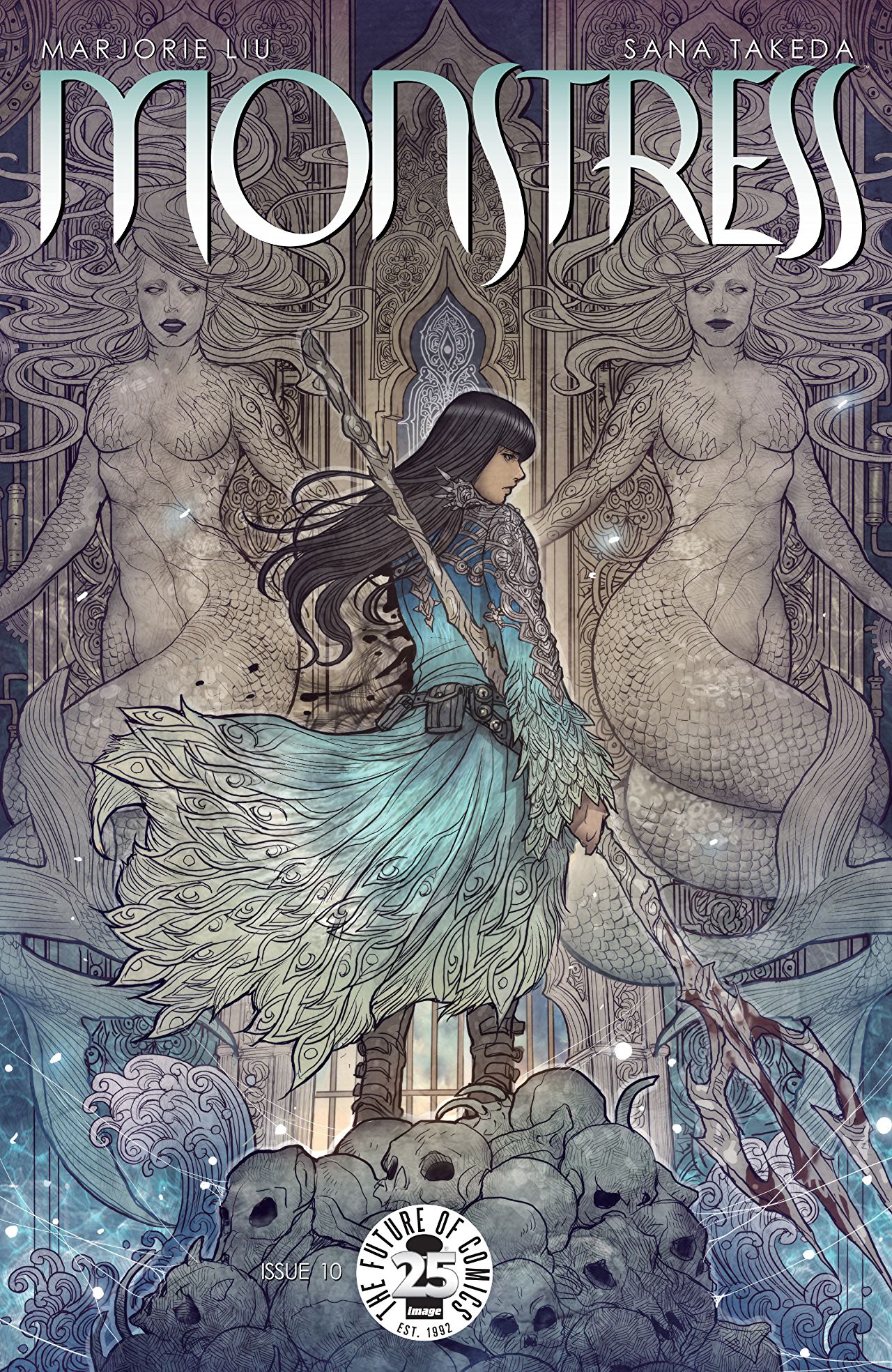 Shout out to Maika for starting to get a handle on “insurance” in this world. A person, er– thing’s word is not bond and she knows it and she makes good on it. She is having less fucks to give as seen in the panels where she starts to warn some unlucky pursuers. Plot wise, we learned more and more about Maika especially in these last few issues. The bigger picture in mind has expanded to where more of her mother’s influence has been found in Maika’s travels and more evidence of what she’s left behind for her daughter to collect. End game: Moriko was betrayed and murdered so ideally we’d want our girl to trend softly but—I’m not stupid. I know she’s headstrong and too far into this mess to tip toe now.

Monstrum is quiet. Quieter. Can only its host recover more of her past and not it? What is truly blocking its past life when it was a God? These memories? Monstrum plays backfiddle to its host most of this issue and while it’s not something I’m too concerned about (WE KNOW WHAT HAPPENS WHEN IT’S HUNGRY)—I’m troubled by what its relation is to the other creature we see in a vision or memory. And… of course, whatever God killer we have on our hands now that may or may not still be around?

There’s a few scenes throughout this book where you are going to clutch your pearls. Your mama’s pearls. Her mama’s pearls. There are some creepy, creepy creatures in this issue. Creepy enough for my own version of the scream song inspired by Jake the dog from Adventure time because the screams keep coming. And coming. Salute a real Arcanic when you see you because our heroine is not fazed.

Takeda’s art, always dripping in beauteous glamour gives us some truly horrific sights that will stick with me for longer than I care to have them around in my head. (Sleeping with the lights on tonight! Thanks!) The Ferry man was a magnificent touch, I’m just saying. I’d never want to meet him but I do have to admit that a backstory on him alone sounds intriguing.

It’s absolutely stunning to examine this mother-daughter relationship further as of late. I feel that our damned protagonist is not only trying to save herself, but perhaps also redeem her mother, deep down. From day one, from issue one this has been about survival. That’s a fact. But I’m starting to get a feel for redemption for a mother who left and didn’t prepare a child for the cruel world that she would soon inherit living in. Time will tell and Maika is a step closer to her goal.

Liu continues setting the groundwork for this world that brings us closer and closer to more answers and more obstacles but it’s not a dull ride. This issue may not have not connected as many dots as I wanted but it still shines and adds yet another layer this world that I can’t look away from.

Are you a Monstress fan? Find BNP’s other reviews of the series here.