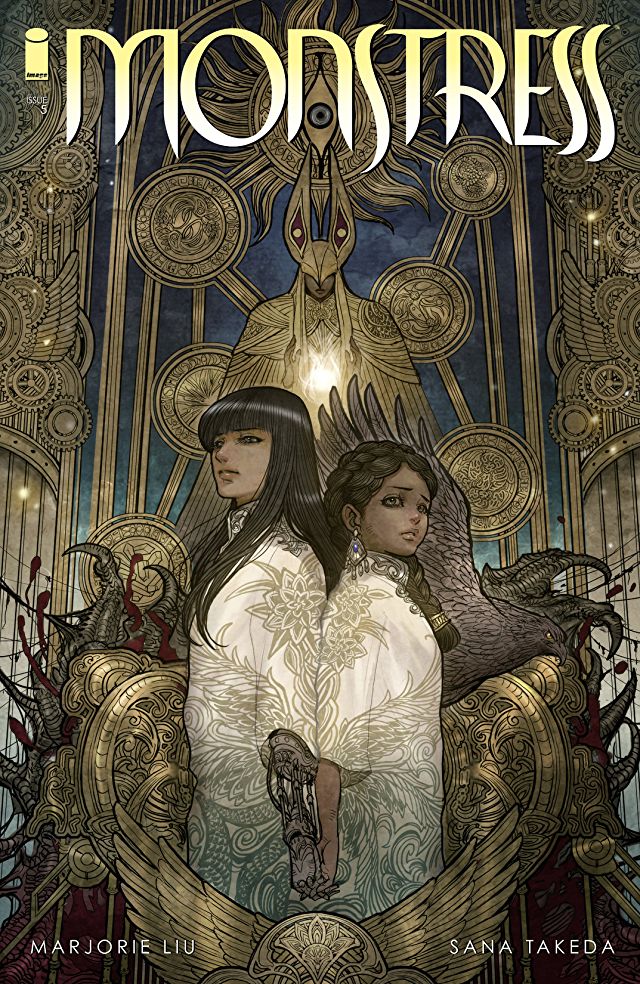 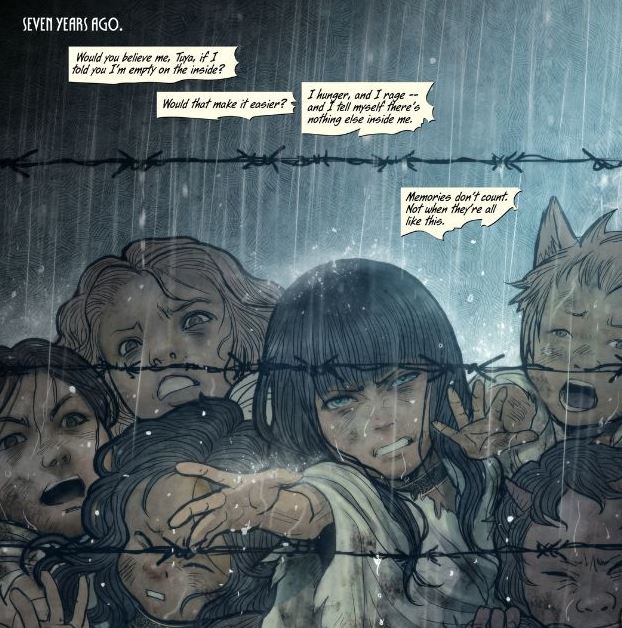 This is the first page of this issue of Monstress and I’m already just:

These pages paired with the commentary, or Liu’s script, Maika’s inner dialogue as she thinks back on these horrid memories (as this is a flashback) and the spoken interactions of her and the other individuals in this scene just kill me. I’m nearly sobbing over here. These pages serve to remind us of Tuya, Makia’s friend from the first issue who with a furrow in her brow advised against Makia’s plans as she saw them as too dangerous. These pages also serve to give us a glimpse of Maika’s horrific childhood as she was separated from her mother and forced to survive, cast off in a uncaring, brutal world.

The chain of events keeps moving and there’s a few characters in pivotal moments that I want to touch upon:

Seeing a kiss and affection from one woman to another, from one woman to her lover brings to mind the wonderfully portrayed relationship of the Dora Milaje of the first issue of the newer Black Panther series which isn’t done for the male gaze either. (In the case of Black Panther, the creative team is male versus here for Monstress, Liu and Takeda are both female) Here these womenfolk are together, ride or die, riding until the wheels fall on. They were both assaulted by Maika, one way more than the other (severely burned and injured) and taking part of the campaign to discredit and hunt her down.

Sir Corvin D’Ororo or RavenBorn, as Maika calls him is an ancient, an member of the Dusk court, a powerful adversary and also a man. He quickly gained my attention because there haven’t been too many distinctly powerful male characters throughout the story so far and certainly not any that are male humans or have a humanoid male body. This certain individual comes bearing instructions to guide our lost misfit crew to safety and everyone is as wary of him as they should be. He presents a new troupe of characters to be introduced in the hierarchy of power in this world and new faces that will be friend or foe. With him, Maika is brazen and rude.  It is also with him that Maika learns that in their stations of life, both have had their share of class discrimination. 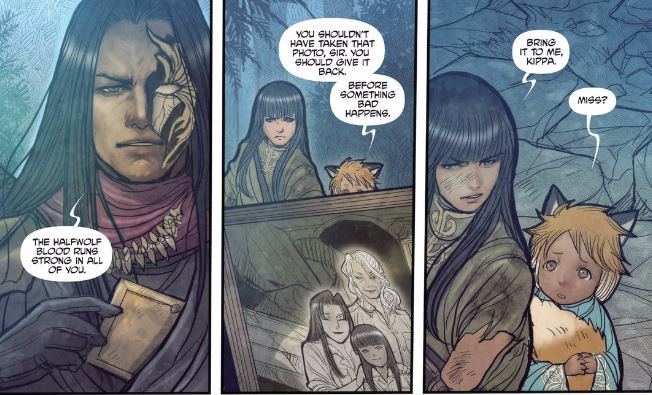 Granted this is a review but I feel it’s as good as a place to address something that’s been bugging me for a while in regards to Monstress when I hear and read such statements like:

“Monstress is pretty but boring”, or “It’s taking too long to get where it’s going (world building)” and then there’s  “it’s all style but no substance”.

Monstress is pretty but boring? I believe the highly intricate and detail art style that artist Sana Takeda brings to illustrate this story may throw off some readers as they may see it as avant garde. I love the juxtaposition present in this comic–you think the art is gorgeous and then see a person maimed or someone being hunted and killed off. You see chained slaves fighting for scraps. You see what possibly is a mercy kill. And it’s hauntingly beautiful. You can’t look away.

The world building? With this issue, Monstress is officially five issues in. The first story arc needs time to get here and be here, to be present with us. (But for trade paperbacks, for Image Comics, five issue may be enough for the first trade) World building is not an easy task for any writer, artist or creative team to plan and carry into fruition. To do so successfully is a feat that I think professionals should get recognition for.  Saga and East of West also popular titles from Image have been running for a while and are so far so gone into their world-building blueprints…what I am trying to convey here is that you must give Monstress a chance here in the first story arc.

Style but no substance? False. Again, an argument that gives back to the first point hopefully tearing down the Monstress being “pretty but boring” statement. I believe that Monstress is a story about identity and possibly redemption. It’s a “chosen one” story of young woman who has her own agenda and doesn’t want to be chosen, counted on or used as a pawn by anyone or anything. Until proven wrong, I think Monstress is a love story—a love letter of sorts as I touched upon very briefly here in this review of issue number three. What I know after reading issue five is what I knew about this comic with issue number one: Maika is needed. She’s not just some girl. She’s powerful. She’s flawed. She compassionate. She can prove to be dangerous when backed into a corner, lethal even with the right combination.

The powers that be are hunting her, the old magic in the world that is fading is aware of her and so many people want to be in the know about her. Her actions have repercussions that affect lives other than her own. She’s a former slave. She’s seen as a threat and a tool. She’s looking for answers. She’s in over her head. She stands tall and unopposed at times. There is so much substance to this comic.  Get into it. I’m hoping that this argument isn’t a cover for “I hate and/or am just too lazy to read a comic with a female lead”. But it could be. It could also be that coupled with “I feel uncomfortable with a comic that that has a disproportionate low male to female ratio presence”. Which can only mean one thing:

I am feel uncomfortable when we are not about me?

This gripping issue furthers the story and also adds context to past events that took place issues back. This issue also mesmerizes with full-two page spreads. Onward with more cats and to a path that leads Maika to understanding how she fits in this world as salvation or a tool of destruction.