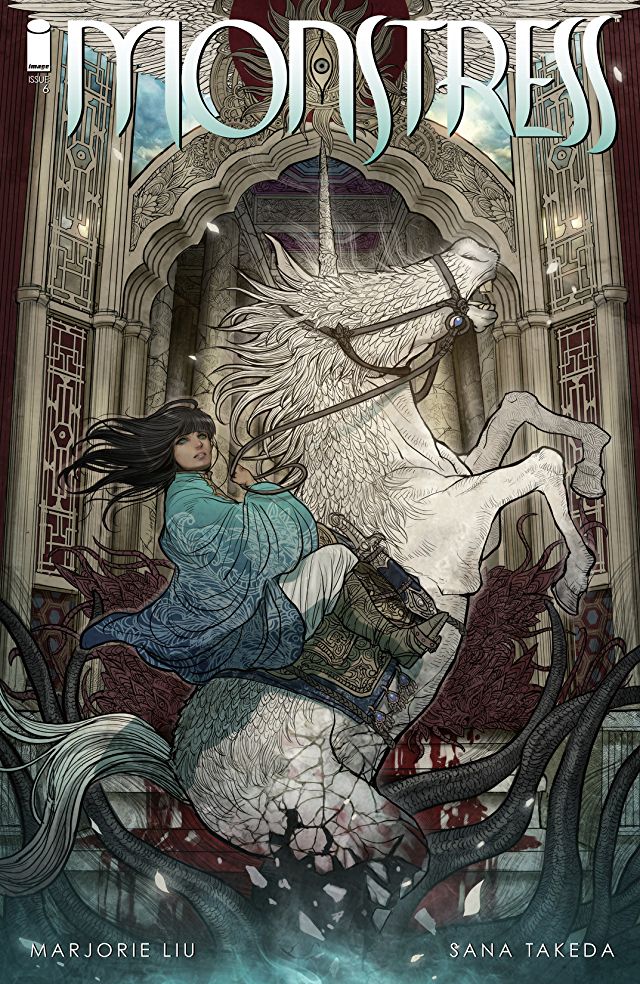 Over the last couple of years, I’ve been making it a habit to be aware of how female characters are presented in the panels on the pages of the comics I read. This means what exactly? On the surface level, this means I read and observe how girls and women folk are posed. How they stand and sit. Their action poses. Their relaxing poses. And, of course, if their body proportions are terribly out of whack, which happens more often than we’d all like to admit.

I feel this is an especially important practice to have based solely on the fact that the majority of (mainstream) comic book artists and creative teams are mostly male and there’s countless offensives to think back on. 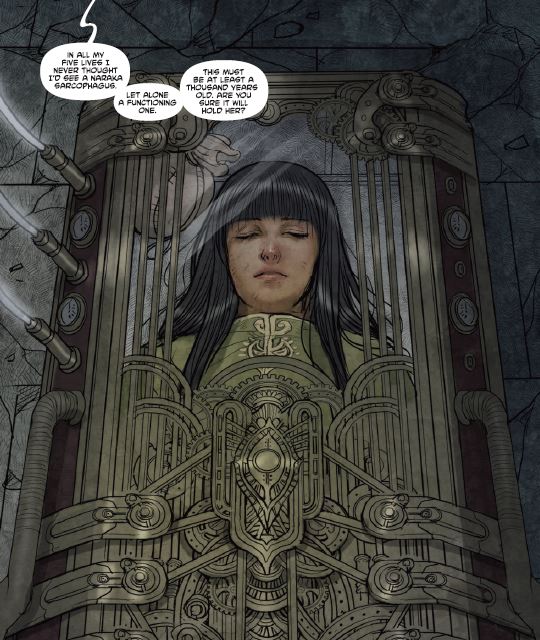 Enter Monstress: I was first intrigued by the creative team of Liu and Takeda. Second, I was drawn to the concept art and, third, the preview of the first few pages of the first issue.

Like every other reader, my first visual of Maika was of her naked, chained, and obviously in a very vulnerable position. It was totally cringeworthy, but worth reading; I was not prepared for the chain of events that unfolded and kept me hooked. From day one from the first issue I’ve been hyperaware of Maika: of how she’s presented as person, as a woman, and – equally important – her sense of agency. Does she have any? Does she have any power, any say so over herself, her body, her destiny in this story?

The first page blesses us with the image of Maika lying in a coffin. Not just any coffin, a suped up steampunk one that’s magicked; it’s perhaps over a thousand years old–a sarcophagus. She’s lying in an object literally meant to hold the dead–as her captors plan for her death and this coffin is only holding her until judgement falls upon her. Things don’t look great for her so far.

And yes…Master Ren has betrayed our favorite Halfwolf and call me a TRAITOR with a capital “T” but I still fuxs with Master Ren. I love that cat and this only makes me what to make more memes inspired by him.

I’m not sure if Kippa is supposed to be a foil to him but these two have great scenes together which really emphasize their differences: the main one being their ages. Kippa is a child and Ren…I can only guess he’s much older but he’s definitely much more calculating and jaded by the world.


[divider type=”space_thin”]
There is a good portion of action that happens in this issue: there’s folks being slayed (literally, not talking about looks here), folks being cut down, and folks getting that lead bullet treatment via guns. Maika is in the possession of one group, while two other individuals seek her out and clash. Maika is a prisoner, she’s a tool, she’s vessel, she’s a monster–she’s everything to others who have their own agendas for her. The best action in this issue takes place internally: within her subconscious, deep, deep down where her memories reside.

This is where the Monstrum, the terrifying creature of old that’s shackled to her, comes to her and attempts to reconcile its captivity with her. It is revealed that her bloodline has been blessed (read cursed) with its presence and Maika is different. Too strong willed and important. Maika is the one and I feel sorry for the poor bastards that get in her way from here on out. Liu swiftly weaves together fragments of Maika’s childhood that include the ancient one residing within her. We see their paths crossing if not briefly unbeknownst to the two of them. It is here that the two can finally stand on the same wave length and not miss each other; where pride doesn’t dry up chances for opportunities….these two work together without smothering each other.

And the best thing? I really feel that Maika, while still on the hunt, while still being hunted has properly claimed herself for herself in some way. Cue the beginning of this review: Agency? I think she got some. Despite the circumstances of still having more enemies than friends, Opportunist Master Ren on deck and obviously the dark power attached to her and inside her…Maika Halfwolf is not here without a fight nor a say in what happens next.

Issue six of Monstress does NOT disappoint by bringing us to a close of the first story arc; there are more questions answered than left out in the open (debatable, I’m waiting for y’all to @ me on twitter). There is closure here, but not enough that I feel the need to lose interest in the series as a whole.

This issue lacks nothing and remains a treat visually – illustrated by Takeda as only she knows how. (And lettered and designed by Rus Wooton.) While I am sad to for this series to have its hiatus (Trade Paperback coming in July!) I do applaud Team Monstress for a job well done for such a consistent and jarringly profound series that’s been welcome in my comics pull list.

10 Names You Will Never Forget out of 10