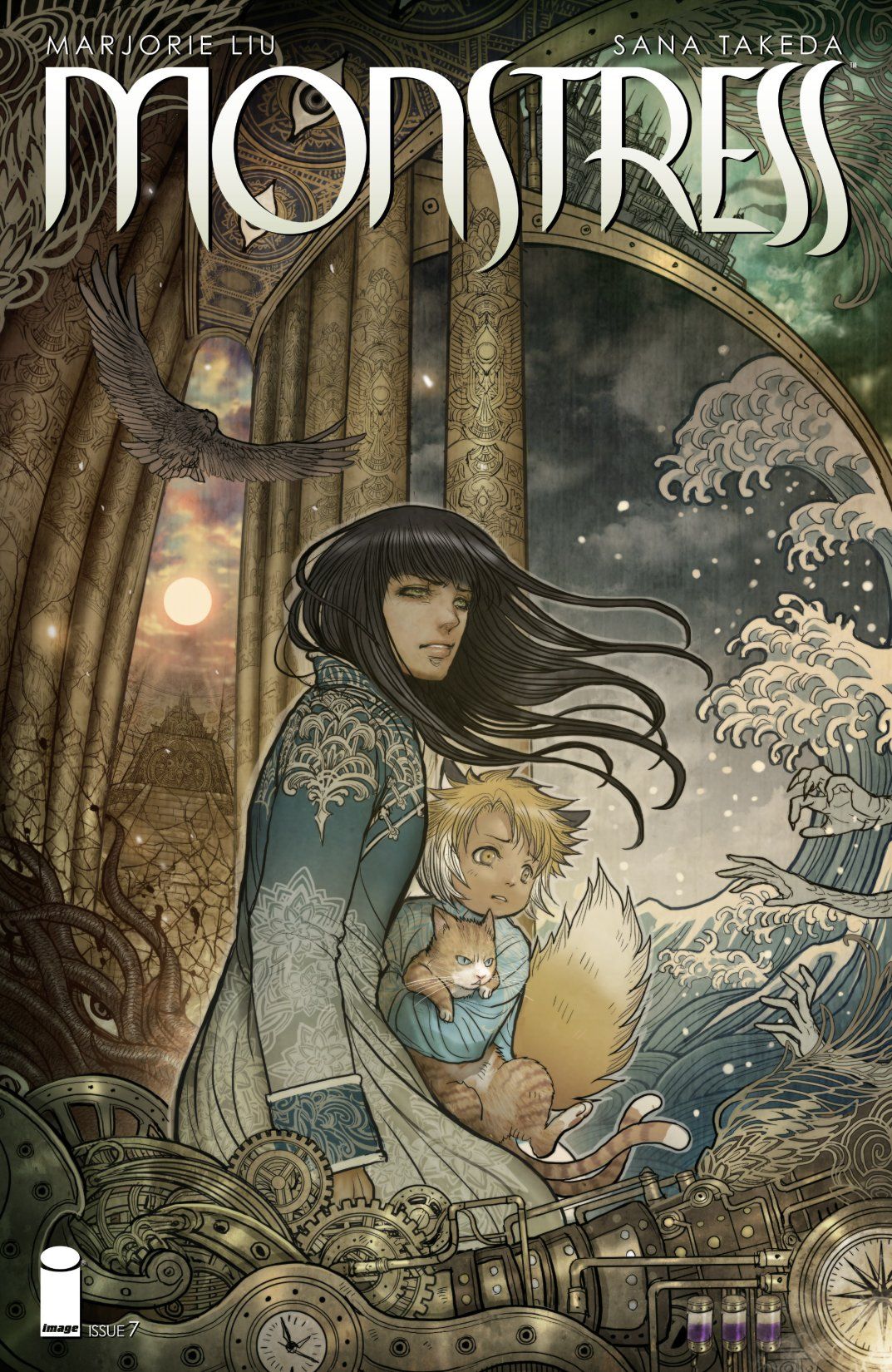 Back off this Monstress hiatus! YAAAAAAAS! Back into this gorgeous and deadly affair to immerse myself into. The first few pages of this comic feature Maika possessed by the God Monstrum feasting… bloody and hungry and… monstrous. She is a terrifying sight. Ironically, I can’t help but think it’s morbidly accurate as Monstrum is hungry, as is Maika. They’re both hungry for survival, for answers. The question hangs in the air of how long can she last, how long can her body last the assault of Monstrum’s feedings, and her lack of control given it is apart of her. How much longer can her body last–an important question as we see she has much less of her arm now.

This issue finds our motley crew of Maika, my precious little Kippa, and Master Ren far from where they escaped still searching, still hiding and still hunted. Maika and Kippa float around through the city of Thyria on the lookout for a woman whom they are told is long gone and find items that smell of death. Maika truly feels the heat as “another ghoul killer” is on the loose as told publicly in the marketplace and she comes face to face with more suffering, LIKE ON EVERY CORNER here in this city. It’s a pleasant reminder of what happens to all those who are weak and fall between the cracks–it’s a reminder of what Maika doesn’t want to ever become again. It also serves to strengthen her resolve to not end up like her mother: betrayed and murdered quite possibly by the hands of someone she knew.

The world building keeps expanding as Master Ren travels to a temple of yes… MORE CATS to bring news of the happenings of the world; he’s heard one of the old Gods talk and this changes everything for all of them.


[divider type=”space_thin”]
While I was hoping to see more behind his motivations behind betraying Maika this issue I was pleased to see him sweat as he was literally called a snitch and intimidated so hard I swear he probably lost one of his seven lives.

New faces and names enter the circle that surrounds our girl: friends and comrades of her late mother, creatures that knew our afflicted heroine when she was younger, folks that offer comfort, guidance, and protection but just who can she trust?

Maika is as much a player as she is a pawn it seems with new groups interested in her and what she is. What’s done really well this issue is the handling of Maika’s decision of what to do with Master Ren as he did betray her which is something I can looking forward to reading about in the aftermath of the first volume’s events.

As I mentioned before Kippa and Ren play off as foils to each other and to Maika I think it serves her well as a balancing board on how she proceeds. Kippa is naive, more naive than her and young but Ren is obviously jaded and older with more insight. I’m really curious how much more we’ll learn in the next issue about Moriko’s allies and more on just how she dies leaving Maika to become a slave.

8 Outstanding Killers out of 10