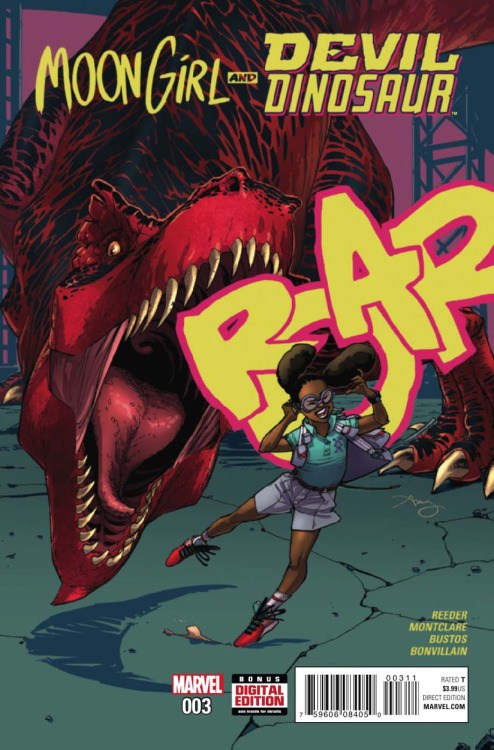 As a rule we like to keep our reviews spolier-free, so just know that if you haven’t picked up the first issues of this series by the end of next month, you’re gonna regret it. I mean… I’m looking at this ending now and you might already be regretting it and just not know. But let’s take it back to the beginning.

Thank whatever higher power governs comics, because this issue returns to give us more of that Lunella and Devil Dinosaur bonding goodness we craved from issue #1. I’ll admit that when I first started reading I was a tad wary of our precocious prodigy taming a prehistoric beast overnight, but Reeder and Montclare continue to have the two characters get to know each other at a great pace. Devil Dinosaur remains uncontrollable with a mind of his own, but we never forget that in many ways time travel has caused him to feel just as lost as Lunella does with the threat of genetic mutation imminent. 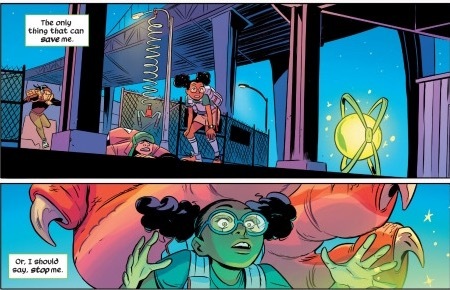 Speaking of, now that the focus has finally been removed from the Killer-Folk our favorite Black nerd kid really has a chance for her dynamic personality to shine through. While some of the scenes at school highlight her intellectual aptitude, revisting her home life truly cements this book as a coming of age story. It’s not Lunella’s undeniable brilliance that draws you in, in fact, but the vulnerable moments where we see just how earnestly she’s struggling to do the right thing in a world that defies logic.

I especially adore the little temper tantrums of frustration that betray her age because comics tend to force their child heroes either to be recklessly immature or practically robotic, so it’s nice to have the balance. 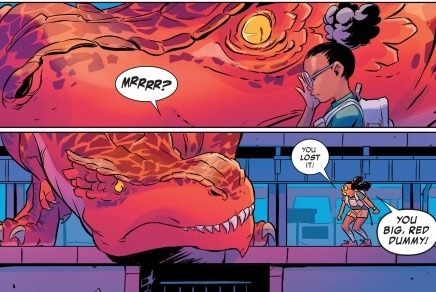 Y’all there’s a beautiful team up about to happen and I hope you’re there when it does.

9.5 Combustable Materials out of 10
Are you following Black Nerd Problems on Twitter, Facebook, Tumblr or Google+?
9 Shares