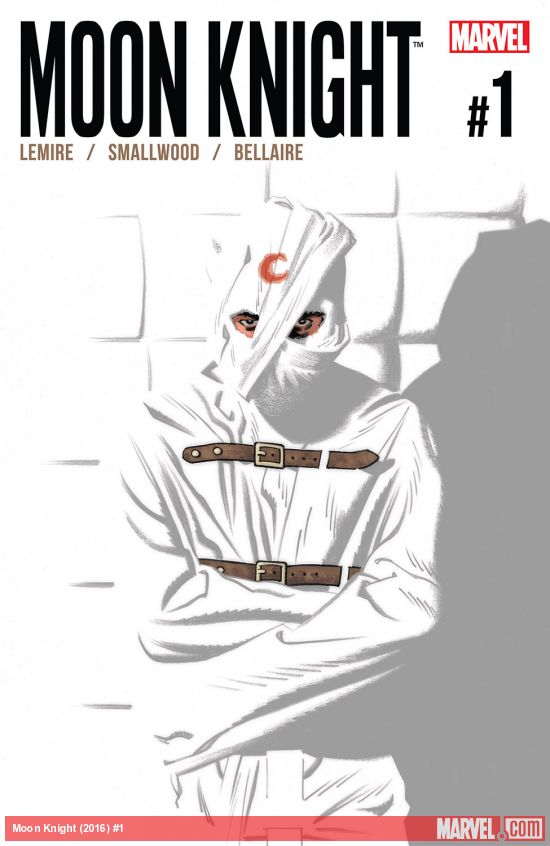 Listen, man. Maaaan… *Gets up from seat and walks away from computer. Stares at self in the mirror sayin’, “you get back in there and tell them folks the glory of this book. You tell them the truth! TALK TO ‘EM!” Sits back down in chair, deep breath, goes into Avatar state* I said, Booooi, I’ll tell you what! We got that new Moon Knight with a new writer but that same Greg Smallwood piff. This is the other side of Moon Knight we’ve been waiting for. This is the psychologically unbalanced Marc Spector we’ve been waiting to read.

We open with Marc Spector in a mental institution. Shit is rough here, and he’s got orderlies beating his ass Nurse Ratchet-style (let’s see how many young readers get that reference) and he’s being fed drugs to keep him doped up. At certain points you aren’t sure if this is a comic book story or a social commentary on how we treat the mentally ill. Lemire is making his impact known from jump as we navigate this new world that Marc finds himself in. We’re seeing the other patients in the series as people from his past that Spector is having trouble remembering. The kicker here is that the doctor is telling Marc that he’s had Dissociative Identity Disorder since childhood — that his time as Moon Knight wasn’t real and was merely fan fiction from a journal. Meanwhile there’s another Moon Knight on the TV fighting crime.

Lemire does a perfect job having the reader right there with Spector, trying to figure out how he’s up in this hospital/asylum/hell. Khonshu is, of course, talking to Marc and trying to guide him out of this hell, assuring him that he’s real and that the location holding him is the true falsity. This is where the story gets so real, in a sense. As someone who’s had a close family member with mental health issues, Lemire does a great job of capturing that hurt for the reader where you don’t know what’s real as Marc sees the world one way as Moon Knight, and then back to normal when he is himself. To see Spector believing he’s seeing the truth — the world as it is — when no one believes him? It’s heart wrenching, man.

Greg Smallwood does an incredible job with the psychological aspect of this book, showing Marc having gone through a bit of his past up until the now. We see how helpless he is when drugged and how frustrating it is for him to try to recall faces, people, and places he feels he should know. Smallwood really sells Lemire’s angle with Moon Knight for this series. We’re also seeing Lemire delve more into Egyptian mythology with the mention of another Egyptian god that will serve as somewhat of a rival to Khonshu. Speaking of which, you gotta wonder why Khonshu doesn’t do more to help his avatar Marc Spector out of this predicament. He’s very keen on this experience rebuilding Marc into something more. 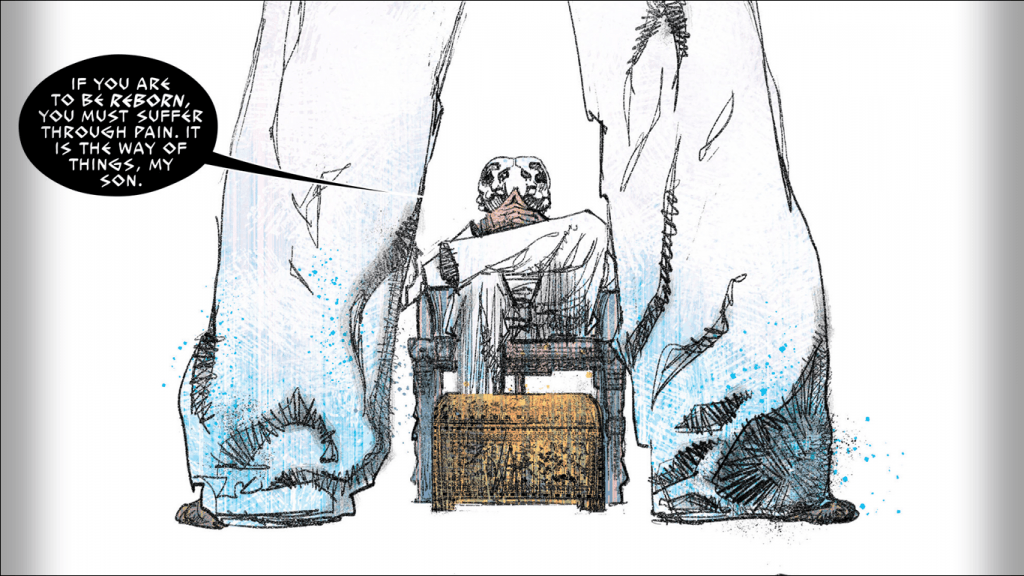 This series starts off hot. It helps if you are familiar with Moon Knight’s previous runs with Brian Wood, Bendis, and Waid, but they aren’t actually necessary. Hell, if you’re familiar with Moon Knight’s back issues you’ll catch things I’m sure I missed that serve as Easter eggs. This run feels like the exploration into Spector’s mental health that we’ve been waiting on for years. Add some Egyptian mythology on top of that and we got ourselves a very different adventure for Moon Knight than we’ve seen for him in previous years. It’s a run we should all be looking forward to.