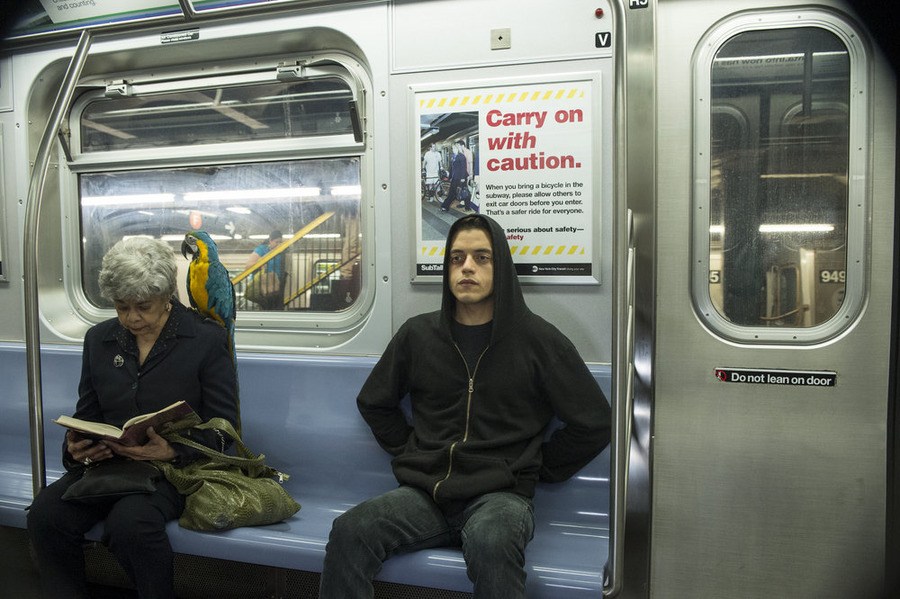 Yooooooo, Mr. Robot just hit us with our first curveball, and boy was it a mind fuck. They set us up with the high heat all season then came in during the 7th inning to shut down any notion that we knew how the season was going to end. As far as episodes go, this one didn’t feel particularly amazing, but as I began to review the tapes, the jumper started to look more and more impressive. And as I already mentioned, the twist ending did more than enough to make this a memorable one. Let’s dig into a few key points of the episode.

Darlene, The Dangerous, First of Her Name:
Darlene gets the pleasure of opening the episode for us. Following a brief introduction to the douchebag she slept with (a surprise), she finds then robs his safe (unsurprisingly). So we get a little insight into her promiscuous side, but I don’t particularly see why this gives us any more info on Darlene, besides quelling any possibility of her and Trenton being hot for each other. Wouldn’t that be something? A burqua wearing practicing Muslim hacker girl and a no-nonsense radical white girl getting intimate on one of the summer’s hottest shows?

Tyrell is feeling the pressure after blowing his lid on the roof and taking out Mrs. Knowles. Lucky for him, he has the most solid partner in the history of ride or die! Joanna doesn’t know exactly what’s going on but puts full faith in her man as he is questioning their focus of late. But it’s not until the boys in blue come a knocking that we get another glorious glimpse of the woman that excites me about finding my soul mate. Tyrell is trying to get rid of the cops at his door asking questions when Joanna comes up to see what all the commotion is about. The cops mention that they are questioning everyone from the party about a body…the body of Joanna Knowles. Yooooo, Mrs. Wellick hit the cops with the most sincere reaction just milliseconds after showing us a sinister look that she pieced together every bit of what happened that night.
This my friends, is a real ass woman.

Tyrell is out there scheming on the other hand. He appears to have Mr. Robot in a bind, but they haven’t revealed exactly what that is yet. One thing we do know is that Mr. Robot couldn’t give a tenth of a fuck about what Tyrell has on him.

Elliot stops to smell the roses:

Elliot figures out that no matter what he does or wants, he will be the one meeting White Rose when it’s time. He finds this hacking Jordan in a crazy signal free facility killing all signals so he she could never be hacked. I’m not gonna lie, I was a little underwhelmed by the meeting. I can see why it’s a little crazy to see how BD Wong’s White Rose turned out, but it’s 2015 yo, I ain’t surprised by a dam’ thing! The time obsessed Chinese renegade tells Elliot that they are back on for the great debt takedown, tips him off that his boss, Gideon, put a honeypot on Allsafe’s new security measures then is out of there with the quickness cuz she has zero time to waste.

A honeypot is used to lure someone or something, in this case, a hacker. Naturally, Elliot is pissed that Gideon suspects him and has to remove it before the big hack to bring down Evil Corp can work. Darlene creates a distraction and Elliot the hack GAWD swipes Gideon’s phone, does his magic and is back in business before Gideon has a clue.

Elliot and Darlene meet up so they can toast to anarchy and resetting the clock. They’re chllin’ and everything is going great until Darlene the Dangerous goes and drops the “I love you” bomb and confuses the shit out this already convoluted mind of Elliott’s. He does what he thinks is the right move? and kisses Darlene. Pretty normal, until she recoils and asks Elliot if he’s forgotten who she is. Theeeeennnnnnn WAM!! Darlene is Elliot’s sister and he has forgotten a whole lot more than that.

The writers hit us with the ill mindfuck! This makes me rethink everything. Their first words to each other, the shower scene, bff ballet. Dam’!

That Black Swan scene tho…

#OllieIsTheWorst watch: Its gotten worse. He’s being blackmailed into screwing over our main characters. How low will he go?