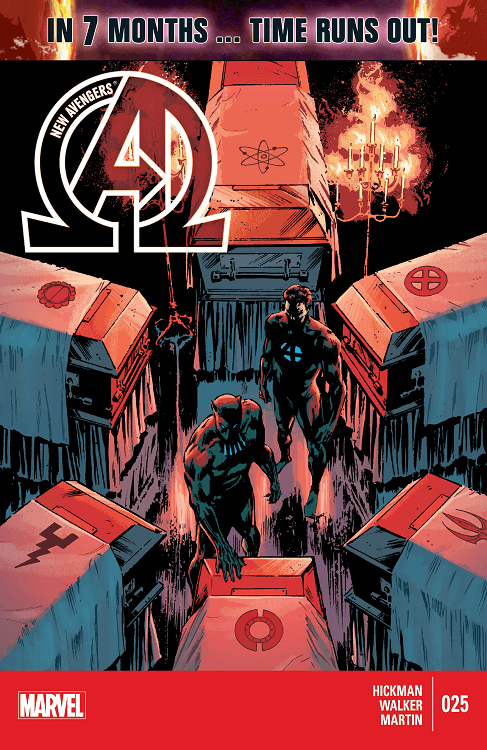 Like much of Hickman’s New Avengers run, the path runs through a forest as opposed to a four lane highway. There are twists, turns, nuance and perspectives given to already treaded ground and at times, little to no forward momentum. While not as impactful as the previous installments, this is still a decent (and admittedly necessary) issue as we catch up with our disgraced and on the run heroes.

What works for and against this issue is the vagueness of what has happened over the last 7 (or 8) months. Tony Stark is in the wind, but we still don’t know why. As are other members, but the Illuminati has also gained more membership during their fall from secret grace such as Captain Britain and Yellow Jacket (who too, is MIA and we didn’t even know we needed to know where he is). It all ends up being either frustrating in the moment or very cool if you are just waiting for the other shoe to drop. I tend to fall on the side of being mesmerized in finding out what happened, but with Hickman, I know it will be a slow drip to get there.

We’re shown the other side of Amadeus Cho’s capture by SHIELD from Avengers #34 and his subsequent interrogation. Sue Richards takes center stage for most of that part of the book as she is in the WORST situation of trying to find her husband, not trusting her husband and still serving SHIELD in its capture of the whole group. This is tied together by the last moments of the last New Avengers where T’Challa joins the group to tell them just how deep their failure runs.

This issue of New Avengers was solid and we learned a little, but not much new happened from the previous Time Runs Out issues that preceded it. Hickman is building mysteries inside of mysteries and while the road there is winding, his track record says the end result will be worth the wait.