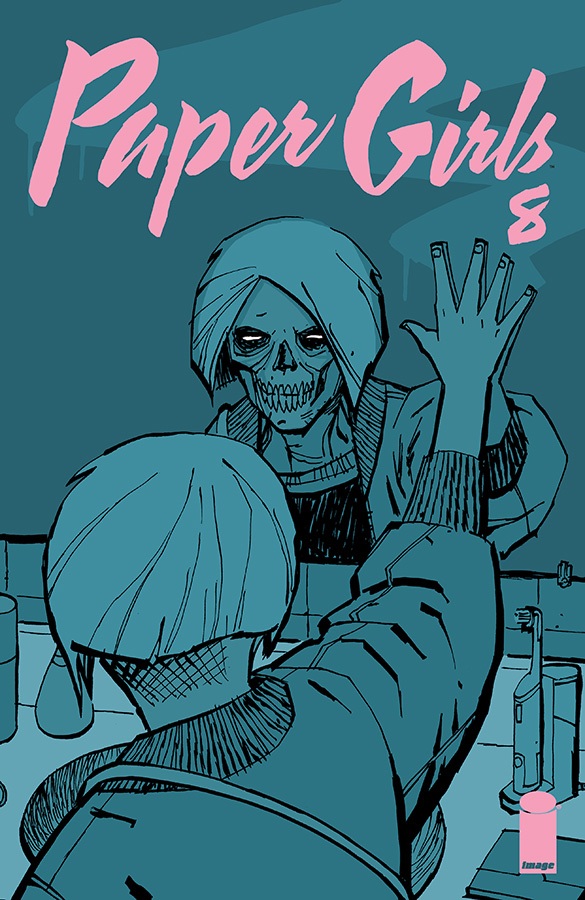 That cover though. That cover needs to be addressed before we go any further, as it’s the most morbid we’ve seen in Paper Girls and seemingly speaks to the direction this series might take. On the heels of a heartwarming issue #7 where kid Erin and adult Erin learn self-love in a way uniquely available to sci-fi, we now see Erin with her palm to a mirror, looking at death in the reflection. God damn it, Brian Vaughan. The happiness never lasts. 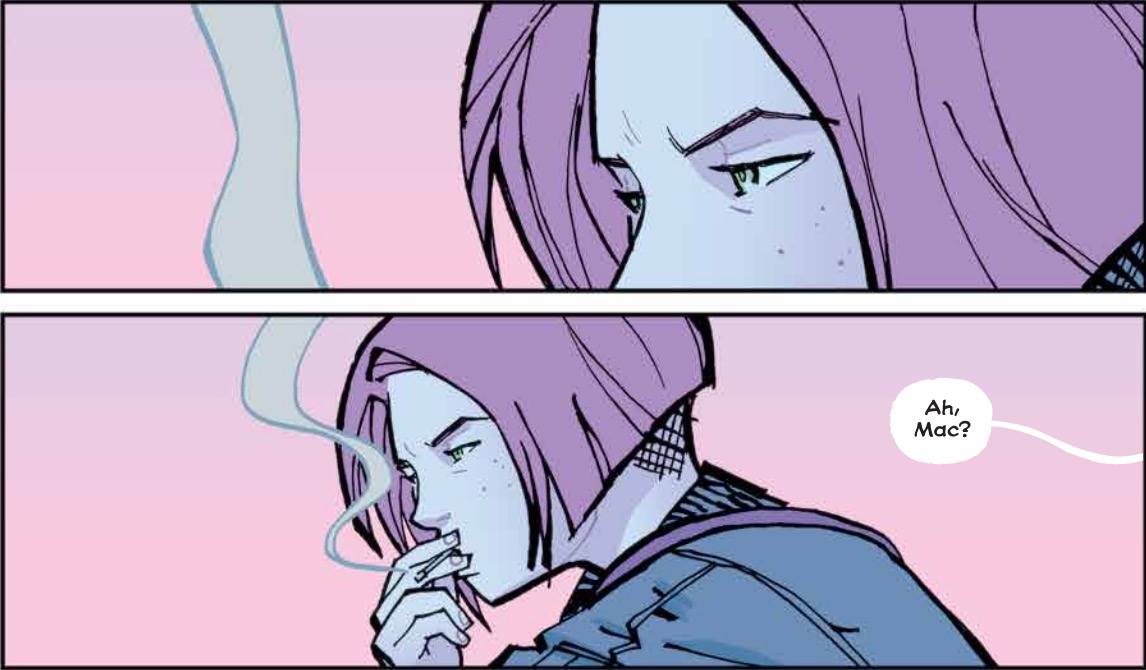 Paper Girls has hit its stride with enough background for us to understand and appreciate characters’ motivations and enough plot intrigue to keep us thoroughly confused yet interested. Several clues have been dropped about how time travel works in this story – a rule-defining element that is essential to one like this, as we covered in issue #6 – with a significant gem shared with readers who are introduced to yet another timeline iteration of Erin. One who tells us that there’s no such thing as parallel universes; that “there’s only one timeline out there.”

Perhaps bad news for Mac who previously discovered her fate: leukemia. She smokes a cigarette in this issue explaining she already knows how she’s going to leave this earth, and it ain’t lung cancer. As we watch her behavior become increasingly fearless (read: dangerous), it provokes a question that readers have to answer: whether fatalism is false and each of the girls can control their destiny, contrary to what Mac was told and chose to believe, or fatalism is real, in which case you shouldn’t worry for Mac’s life no matter what she does. There’s one scene in particular that might serve as evidence to the latter – that their futures are unchangeable, rendering Mac immortal until she dies of leukemia – but do you believe it to be a coincidence? You very well might (I do).

With time travel, determinism versus fatalism, and giant tardigrades fighting to the death, Paper Girls is a beautiful mess right now. There’s a lot to learn about how Brian Vaughan intends to answer these questions in our story, but for now he has readers thinking, and this is the point by which everyone has their theories. And just at the end, he throws another curveball. Come for the sci-fi mystery, enjoy Cliff Chiang’s fantastic art, and look forward to discovering how the whole timeline fits together as our girls search frantically for their missing friend KJ. Paper Girls is an incredibly fun, diverse, and challenging sci-fi adventure.