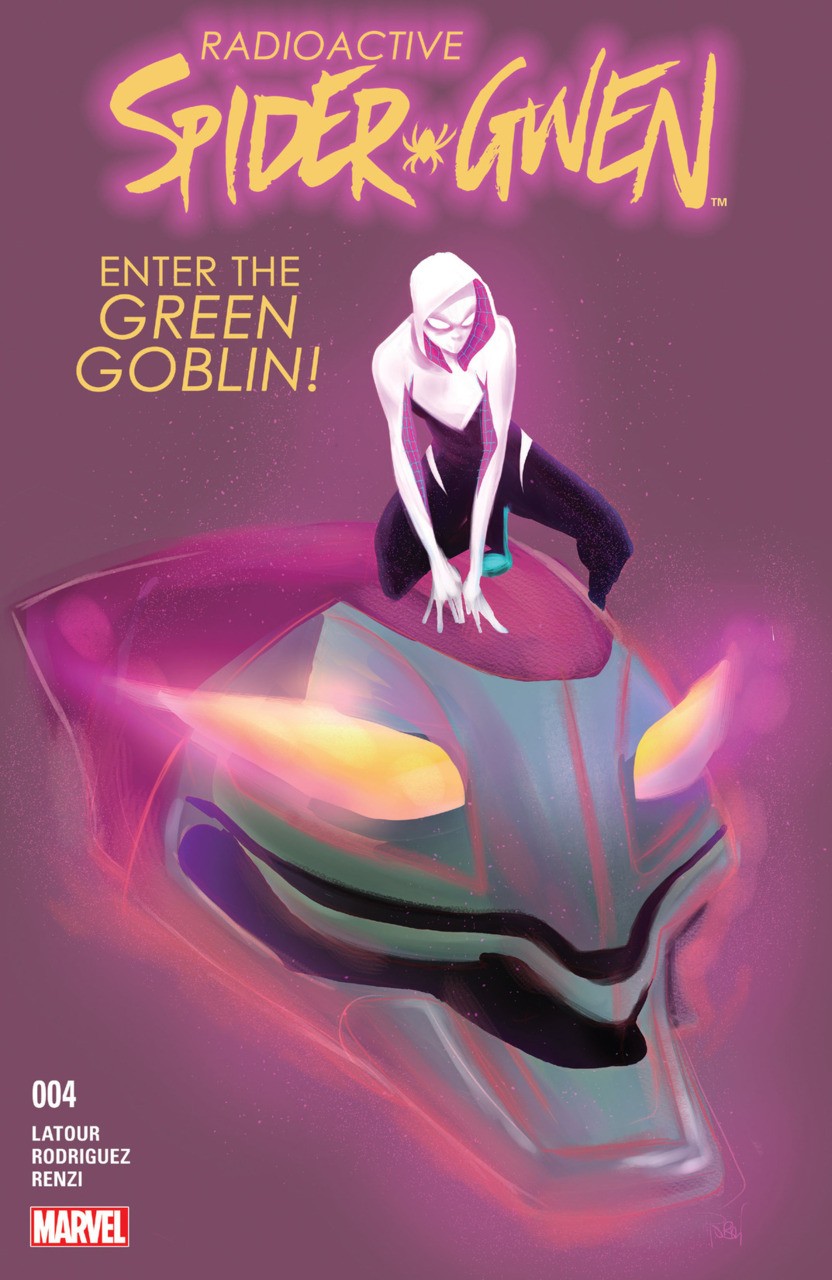 Well that was fun. After the build-up from issue #3 warned of the impending clash between Spider-Gwen and Green Goblin, issue #4 went straight past “Go,” collected $200, and dove headfirst into a street fight. And while the fight is between Spider-Gwen and Green Goblin on the surface, the more nuanced conflict is between Gwen Stacy, who knows Goblin’s identity, and Harry Osborne, who has no idea he’s trying to kill one of his closest friends. And even deeper under that surface, the fight is between Gwen and her conscience as she replays the death of their friend Peter Parker – the death that brought them here – and how she did so many things wrong.

If you’re looking for action, this issue is for you because it’s literally one big action scene. It’s spliced with Gwen’s inner dialogue offering insight into this fight that she doesn’t really want, the regret of how things played out with Peter, and how much she’s plagued by guilt that her pride, hubris, and look-at-me-I’m-a-superhero type of fun was so stupid and caused so much damage. 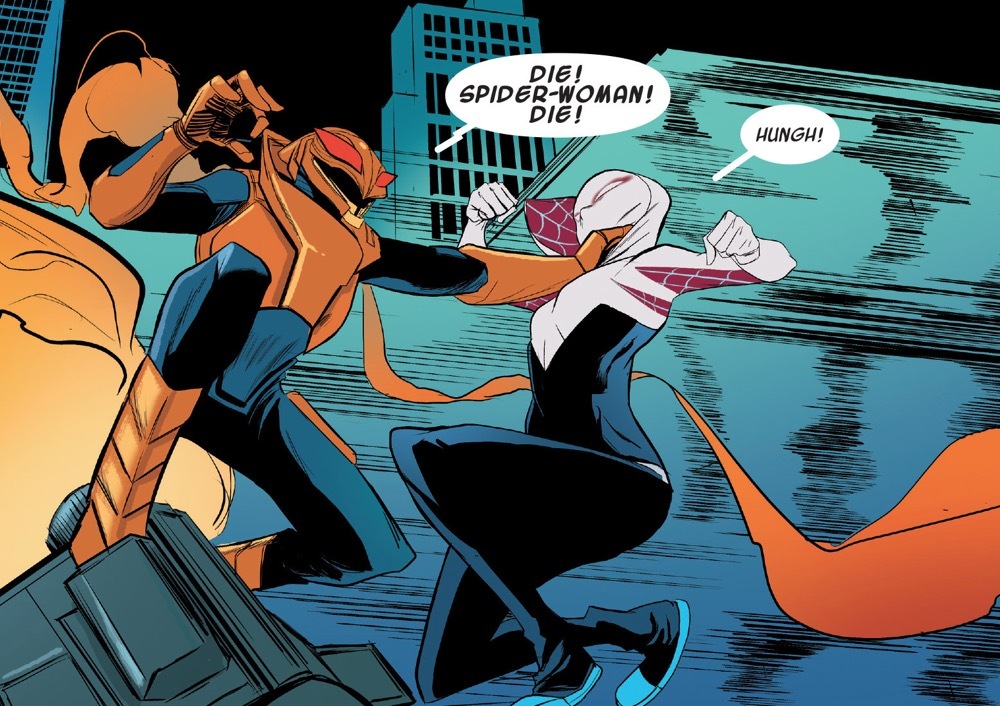 Although it’s obviously a deeper, more introspective issue, Spider-Gwen keeps her typical behind-the-mask humor throughout the fight, singing TV theme songs and making quips, more to herself than to taunt her friend Harry who is obviously hurting and trying to kill her for righteous revenge. And, as standard, the comedy serves to keep the issue lighthearted and Gwen endearing, although the jokes can be pretty hit-or-miss for me. The tricky part with reading Spider-Gwen’s humor sometimes is that I cannot imagine Gwen Stacy saying some of this stuff outside the mask… ever. So reading “Spider-Woman is for the children, yo” and imagining her saying it as white girl Gwen Stacy induces a cringe to the highest degree.

My favorite thing about this book continues to be that level of introspection displayed by Gwen in-costume, making her a very self-aware hero who makes mistakes and recognizes them. She tries to be honest with herself, and that level of genuine self-awareness is one of the best qualities you can have in a character. It shows you not only their growth, but also the path they took to reach their decisions, and it’s great to read.

The most fun part, though: Spider-Gwen has some serious bars. There’s at least one panel each of her fights where the comedy stops and the realness shows, and when she’s not quipping and flipping around you know it’s about to be raw. We saw it in issue #2 when she fought alongside Samantha Wilson, and we see it here in her showdown with Osborne. Each time is a gem just rare enough to get you hype whenever you see them. 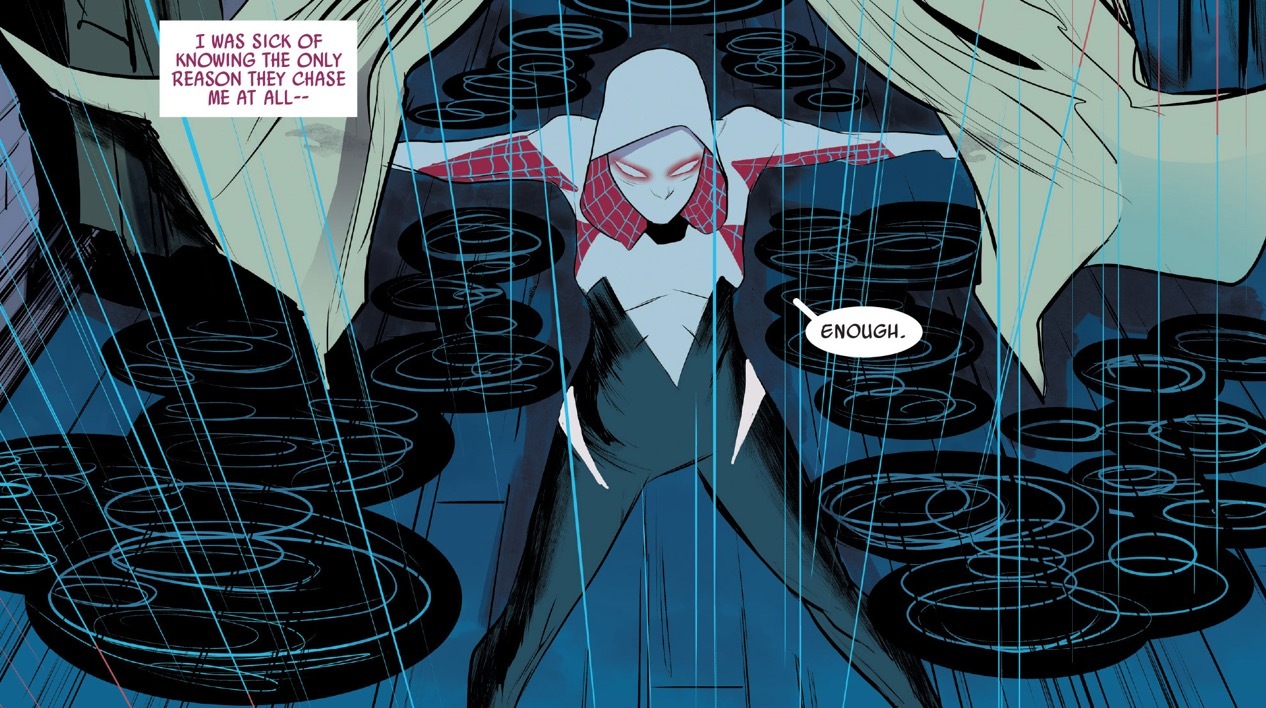 Much credit goes to Robbi Rodriguez and Rico Renzi for continually slaying the artwork and colors in this book. The angles, the information given… the panels are obviously visually stunning, but it’s great sequential storytelling as well. One 5-panel page ends with Gwen swinging a sledgehammer, and you can follow its trajectory on 4 of the 5, from its introduction at the top of the page leaning against a cement barrel, to it hurling through the air and the moment it’s caught in Gwen’s hands. It’s great work that we sometimes take for granted, the ability to subtly introduce information that will be used later on in a sequence.

And so Spider-Gwen continues to be a great book, mirroring Earth-616 and Earth-65 with a fun-mirror twist. Everything is different, only slightly rearranged, and destinies more or less remain the same. I still hope for a series that fully embraces its own originality by nixing any dependence on Peter Parker in the story plot, but time will tell where we go on that one.