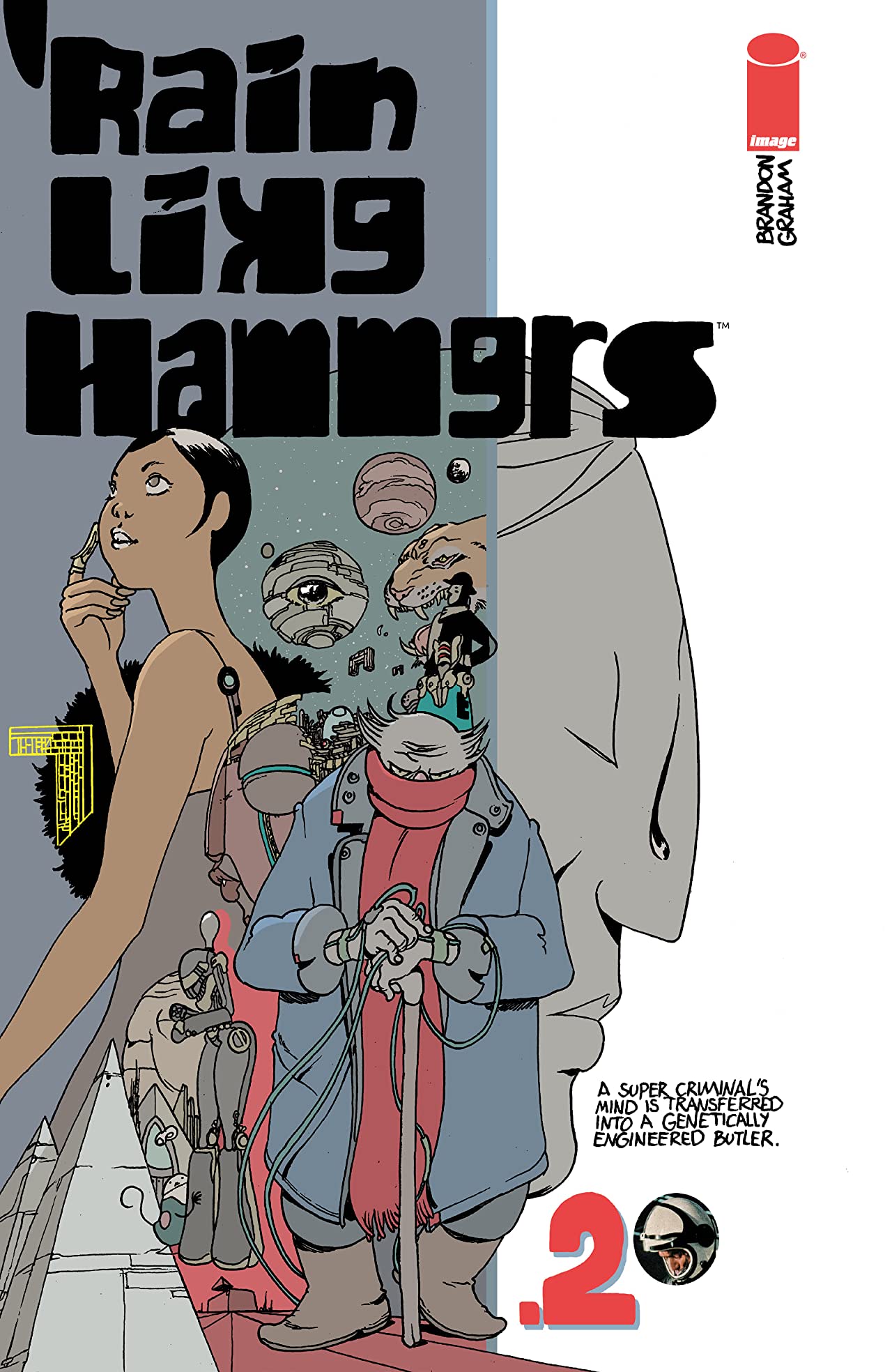 The second entry of Rain Like Hammers does not resume the adventure of Eugene. Rather it opens up with the wanted poster of Brik Blok. Brik Blok is very much diametrically opposed to Eugene. Even the locations they navigate are opposite, with Eugene escaping from Elephant, the roaming city in an unspecified desert, and Brik Blok crash landing on Sky Cradle where he immediately switches bodies with a butler to preserve his own life. And I do not know how exactly these stories will intersect outside of the fact that there is a map that puts the two worlds as neighbors, but I do know that the larger universe that Graham has constructed is still exemplar.

Rain Like Hammers #2 is much more active than its predecessor. Brik Blok is a man on a mission with set directives and purpose. His crime is not specified, only hinted at, as is his mission to infiltrate the Sky Cradle’s aristocracy to rescue El, whose story takes up the back half of the chapter. This vignette serves to expand the scope of the world, and it does nothing but multiply the number of questions I have.

But the core thematic is still resonate. The fact remains that Graham is still writing about the failings of a future society with problems rooted in current sources, namely the greed of those in the power who refuse to relinquish power, the cycles of abuse and servitude that are perpetuated as a result of these systems, and the violence that comes with the territory. It is a fascinating counterpoint to the first issue, but coupled with Graham’s unique art style, feels very connected and cohesive.

Brik Blok and El, much like Eugene, are cogs in a machine for different reasons, on different places, but just trying to survive in this proto-futuristic society. And the thing is, Rain Like Hammers has this ethereal quality with its artwork and this witty and intelligence with its writing. Graham’s art work captures this almost magical-realism quality with science-y trappings and balances clever quips with meaningful introspection that play beautifully with the art on the page.

And one of the most telling examples is in the opening sequence, where space itself has a large solitary speech bubble that just says “no sound.” Like, the levels of brilliance. The way it conveys something we know to be true and gifts it even more impact, it’s a truly wonderful thing, and there are a multitude of these tiny encapsulations of grand concepts in incredible panels.

This is not the story I was expecting, but it is one that I enjoy nonetheless and I’m ready to see how the narrative intertwine. Rain Like Hammers #2 has the same energy and vibes, just with a different cast of characters on a slightly different setting. It’s a fascinating comic and one that I’m looking forward to seeing through all five issues.

Enjoying Rain Like Hammers? Check out BNP’s other reviews here.