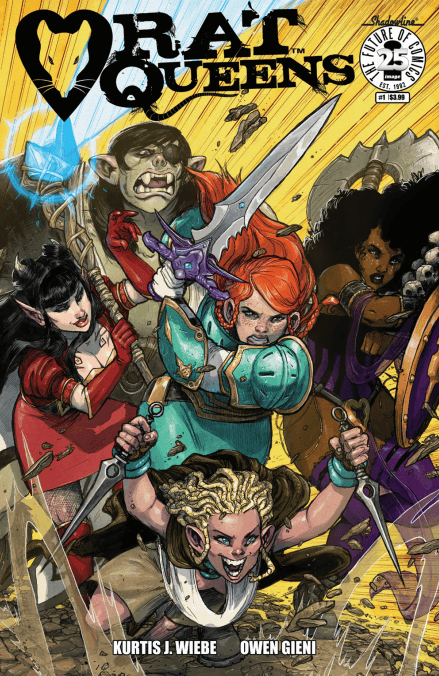 In that way that life and art are intertwined, there was plenty of drama to go around when Rat Queens went on hiatus around this time last year. Dee, Violet, and Betty were off on their own. Hannah was in the beyond. The art and plot of the comic was tied up in knots of artist switches and rumor. It was a good time to stop, pause, have a drink, and remember what we’re here for: to watch 4 women characters be the absurd Role Playing game characters you always wanted to adventure with. And while Wiebe doesn’t hit that note exactly with this new issue, he and his new artist Owen Gieni come close.

This soft-reboot opens after an unspecified gap of time, with Violet awakening to the remains of the best/worst party of all time: 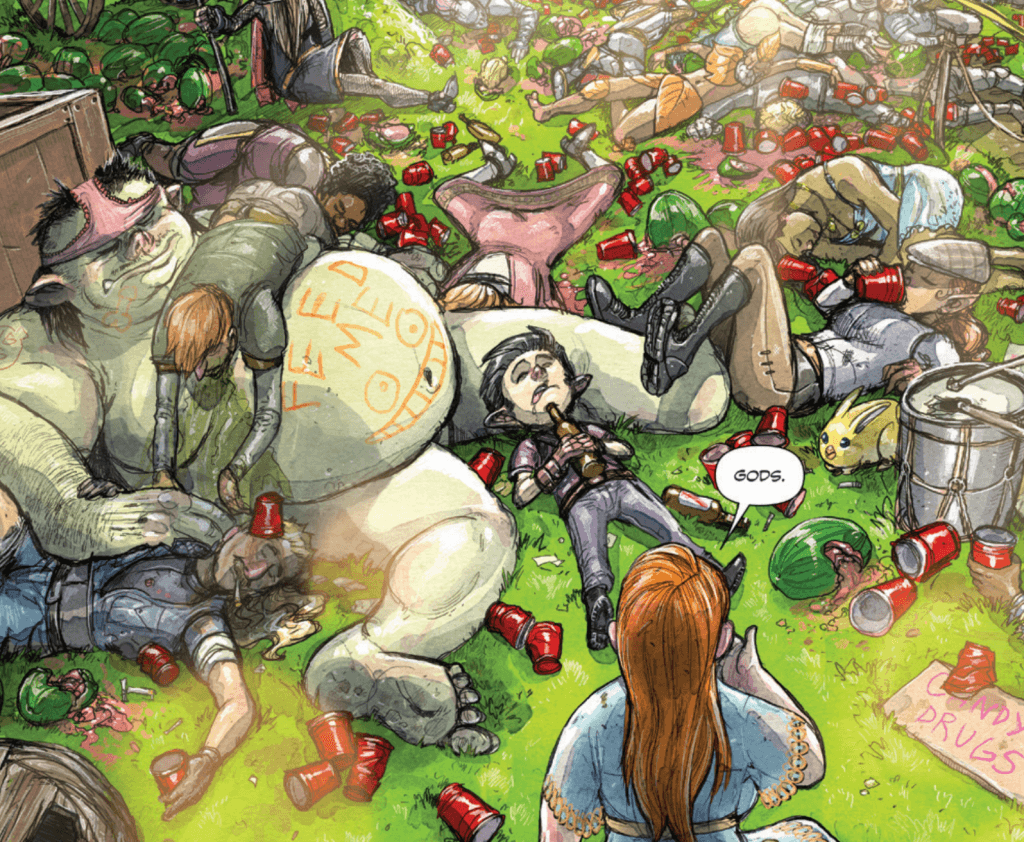 Reunited, Hannah’s dad has moved in with the group as a sort of Alfred — he cooks, he cleans, he annoys Hannah — and he sees the womenfolk off on their latest quest. There are plenty of references to them all “wanting to get back to basics” so it is obvious that Wiebe knows what he’s put his fans through, and is trying to reassure us that he’ll do better this time. And he does pretty good. The dialog is still sharp with an adult hilarity that is a perfect palate cleanser after too many all ages-comics. 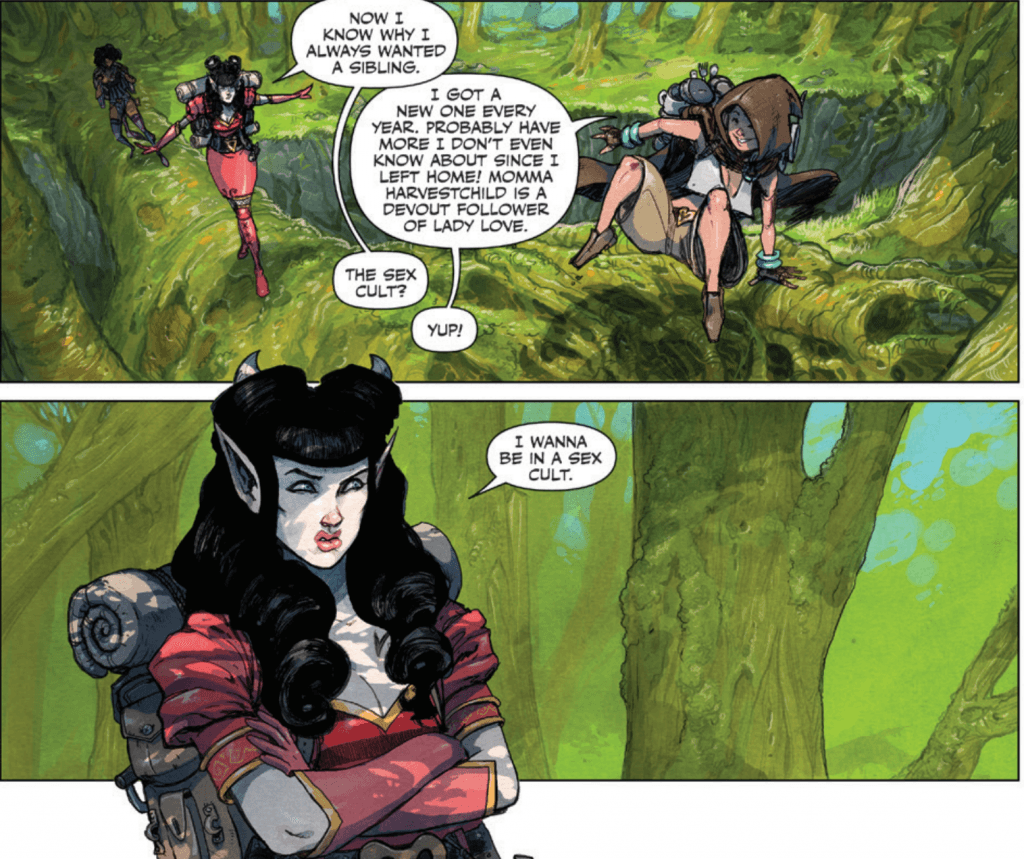 The art is *completely* different from both Upchurch and Fowler, so the slightly different faces may take some getting used to. Still, Gieni, who’s been around in webcomics and print, holds his own. The colors are trippy and psychedelic when necessary, and crisp and detailed when necessary too. He even makes a halfway stab at Dee’s hair, which is a thing with me.

In the end, the Queens hook up with Braga, everyone’s favorite Orc, and they get back to their chosen profession: massacring monsters for money. While investigating some missing caravans, they run into a number of surprises, including someone from Vi’s past. *hint hint*

Should you pick it up? Yeah. If you have lingering issues about the team, I can understand that. But if you were a fan of Rat Queens before, there’s plenty here to like. The team is coming together and the plot is developing nicely. The whole thing is snarky as all hell. I was excited to see this new opening and I remain optimistic about the future of the team. Fuck yeah, Rat Queens! 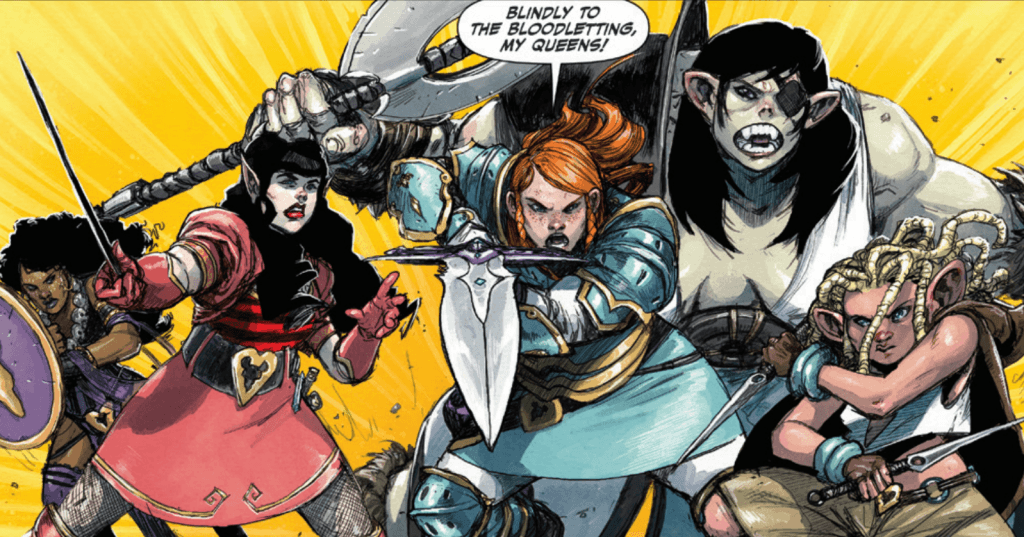