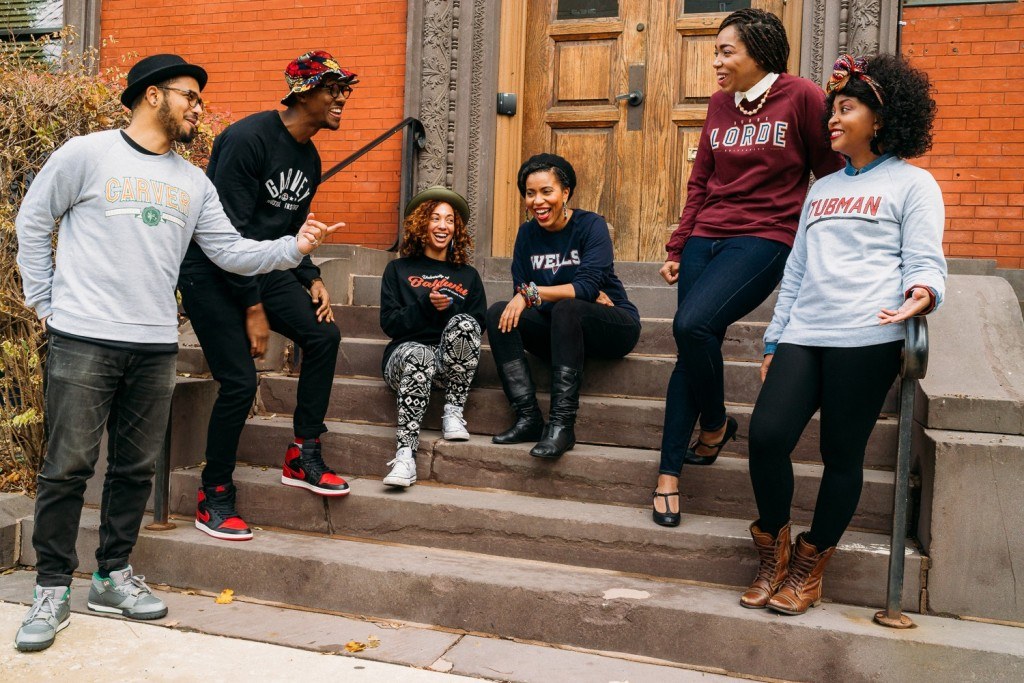 Activism is at the forefront of our society today. Most people of color may agree that this is not a season to be passive, but a season to find your way into the fight. It is a season to be heard and to be seen. This is a season for ongoing representation of those of us who have found ourselves being underrepresented and misrepresented in the trenches of our continued fight for our civil rights.

Here’s one thing about activism. We can’t march every day. We have families and work and school and so many other things to take care of on a daily basis, including our own self-care. However, representation matters and that’s where businesses like Philadelphia Printworks come in. They help us to be seen and to stand out while invoking a sense of comradery, pride, and inclusion.

I had the wonderful opportunity to chat with Philadelphia Printworks owner and co-founder Maryam Pugh to learn more about her business, her vision and to fangirl over her newest line “Embodied.”

Black Nerd Problems: Tell me a little bit about yourself.

Maryam Pugh: I am a screen printer and a mother and I run a t-shirt company….

BNP: Do you consider yourself to be a nerd?

Maryam: I can definitely embrace the term nerd, you know. I would consider myself one. I read a lot. I do all of the quote/unquote nerdy things and I think I would fit the stereotypical nerd description. I find myself consumed by certain things that I’m passionate about, which I think essentially is really what a nerd is. I worked in the computer business for ten years. I was a software test engineer. For me, the biggest thing is reading. I’m into reading.

BNP: Is there a particular author who is your favorite right now?

Maryam: I just finished the book called Homegoing by Yaa Gyasi. It is the first time I’ve experienced an author who wrote in that sort of structure, where every chapter was a different generation and it explored the generational divide and how the gap widened from Africa to Africans to African-Americans. It was so ambitious. She did an amazing job with it. Alice Walker is probably my all time favorite author. Sonia Sanchez is my favorite poet and I’m a big Octavia E. Butler fan.

BNP: How and why did you create Philadelphia Printworks?

Maryam: We started in 2010 and in the beginning, it was myself and my business partner at the time, Ruth-Poloma Rivera-Perez. She was in her early twenties, I was in my mid-twenties and we were just very excited about the idea of helping our community or being an active participant in our community in any way possible. The idea of screen printing and the whole DIY culture was very appealing to us. Around the time when I had actually met her, we both had the idea of getting into screen printing and starting our own t-shirt companies. So, when our paths crossed we had the catalyst we needed and the energy to give each other the confidence we needed to actually take that next step forward. BNP: You have several collections with Philadelphia Printworks, most notably, the School of Thought Collection, which I absolutely love. If these universities were really in existence, which university would you have been most likely to attend?

Maryam: It’s so hard! [insert giggles here] I’m going to have to say Audre Lorde University, right, but I would’ve been standing in the yard looking over at Baldwin University [insert my old school fist pump and hoorahs here] and I would’ve been going over there for parties. I’d be going over to Carver University to learn what they were doing in agriculture. I just love all of them so much, but I think my heart is with Lorde University because I felt like my own identity was reflected so much in her work.

BNP: Speaking of Audre Lorde, she says “Caring for myself is not self-indulgence, it is self-preservation, and that is an act of political warfare.” What do you do for self-care?

Maryam: I struggle with this myself and I’ve always kind of struggled with this. I was brought up in a way where, well, I’m pretty ambitious and competitive by nature. On top of that, as African-Americans, we’re always taught that we have to give 110%, you know… 120, 130, 140 percent; so we never have the opportunity to breathe, to take the time to be kind and gentle with ourselves. So, I think a lot of that for me has been reconditioning myself to say it’s okay to put yourself first in some matters in your life. With that being said, I would say that the tools I lean on the most are meditation, yoga and reading. I keep coming back to reading…For me, it’s very therapeutic. I’m able to make time stand still when I read. I can step out of the world and into a different space in my mind when I do that.

BNP: Your new collection, “Embodied,” I have to tell you that so many of the women at Black Nerd Problems flipped out over it… sending each other pictures of one another in the leggings… You’ve got beautiful curvy black and brown bodies all over these leggings and tanks…You have to tell us what inspired that line.

Maryam: I feel like we take so much for granted, I feel like we’re conditioned in so many ways… a lot of our ideas, like “School of Thought” and “Embodied” are very much things that are so obvious but because of the way our society is set up, it’s things that don’t come naturally to us. I would say that “Embodied” actually came from Jean-Jacques Gabriel who is the Black yogi who is actually one of the images on the patterned leggings. He approached us and he saw that we were beginning to collaborate with artists. He saw the “Professional Black Girl” collection and I knew him prior. He had already had in his mind that he wanted to do a collection and it’s for the same reasons. He teaches a lot of yoga and is an instructor and teaches AcroYoga. He would go to all these spaces and never see himself represented and he would get these endorsements from other companies to where their stuff and he just really wanted to pay homage to Black people engaged in self-care practices.

That’s really where the inspiration came from, it was all his idea. He brought it to Philadelphia Printworks and I was so excited to receive it. That was actually before Trump was elected. We worked on it for like 6 months…7, 8 months. Then earlier this year in January after Trump was sworn in and he started doing all of these executive orders and he still is and that’s when we ended up releasing the collection. I feel like it was really timely, because now more than ever we need self-care practices. You have to be able to take care of yourself in addition to being out here protesting and marching. If you do all of that without balancing it, you’re going to burn yourself out.

BNP: I think it was perfect timing. Also, the colors that you chose for the line are so bold and amazing. They’re beautiful. It’s an absolutely beautiful line.

BNP: Since you started Philadelphia Printworks, have you ever received any stories or comments from customers about reactions to your product or things that they’ve experienced or interactions?

Maryam: Yeah, actually we just retweeted a story from a customer who said that they were in the suburbs of Detroit, in like a white neighborhood, wearing a Black Panther Free Food Program shirt and they were getting all kinds of stares and gawking. They were like, they didn’t mind it, because they were happy to be exposing that group to that type of thing. I’ve been at vending events and people have looked at me sideways because of the merchandise we’re carrying. Depending on the day, I invite those kinds of conversations, because I think they’re necessary for us to have. It also ranges to the opposite end of the spectrum, where people will see the same Black Panther legacy shirt and people will say “Oh my God, my parents were fed by the Oakland Free Food Program,” or “I was a person who was fed by that program.” Then you see how it directly affects people… I think if you know about it and you see someone somewhere wearing it, you feel like you’re a part of something and I think that’s really important. BNP: How important was it to you to build a team of women and people of color for Philadelphia Printworks?

Maryam: It’s very important to me. Our mission is about intersectionality and creating space for these different voices and the best people to tell those stories are the people being directly affected. It comes with the territory. It’s required, based on our mission. It’s important to me to practice what we’re preaching. These messages that we’re out her giving, we want to create a work environment that’s similar and that does those things that we’re talking about.

BNP: For other women of color considering becoming entrepreneurs in today’s society with all of the things that we have to rise up against, is there anything that you would like to tell them or that you wish someone would have told you when you were starting Philadelphia Printworks?

Maryam: I’ve been reflecting on this a lot lately and am now doing this full time since about a month ago. I also just read an article that said that by 2020, 40% of the workforce will be freelancers and doing gig work. So, it was an affirmation to me. What I would say is find what you love to do and stick with it. Since the beginning of Philadelphia Printworks, I took my first step and every year, every step after that I just wanted to be better than the last step. Every year, I would stop and reflect and make my plan for the next year to be just a little bit better than I was the year before. I think that by breaking it down incrementally, it’s a lot more accessible and less overwhelming than trying to have everything figured out when you first start out, because it’s impossible. You’ll get there and then you’ll learn more and then you’ll go from there. I think if you do that, then you’ll turn around in 6, 7, 8 years and will have learned so much at that point. There will be people who will respect the knowledge that you have learned, because you’ll be an expert in whatever it is that you’ve decided to devote your life to. So make sure you love it and stick with it.