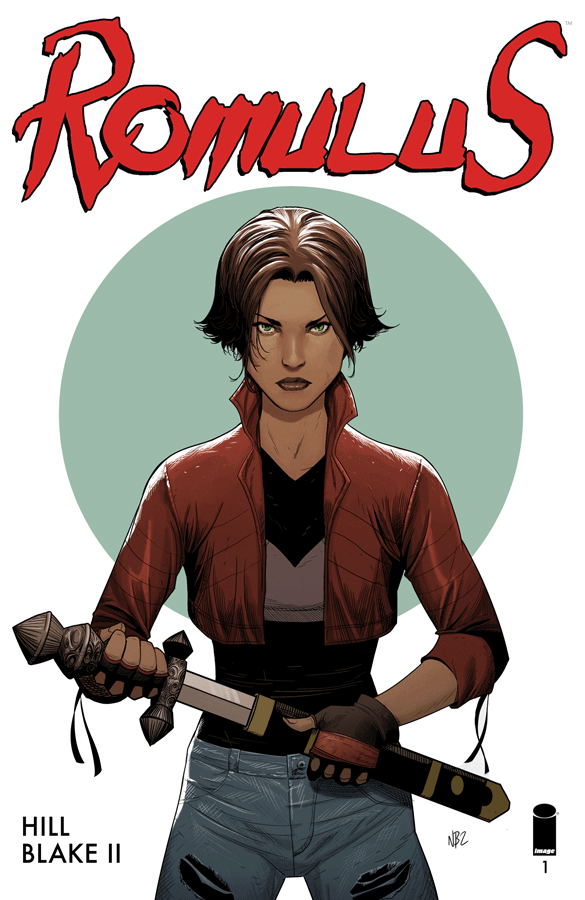 [quote_simple]”I’m just a girl, what’s my destiny? What I’ve succumbed to is making me numb”[/quote_simple]

Now I’m minding my business up late on Twitter lurking (you know who I am) when BNP editor Will Evans comes outta nowhere, Randy Orton style, and hits me with the R-K-“Yo! Did you read this book Romulus?! Maaaaaan, listen.” When you get that “Yo!” + “Man, listen,” you know it’s about to be real. So I stopped in the middle of a banger tweet and began to indulge in Romulus. I knew this shit was flames when the second caption box said, “I’m a girl. So I get to live.” Say word, we got a woman lead, man. As we delve into the back story we come to find out that Romulus is an Illuminati clandestine type of secret society. The girls in this order grow up to become their assassins from birth. These assassins are the wolves of Romulus, always working from the shadows and shrouded in mystery. They’ve been shaping the world through making mad folks in history go nighty the fucking night. Ashlar is the latest soldier that will help shape that world under the guide of her mother Axis. 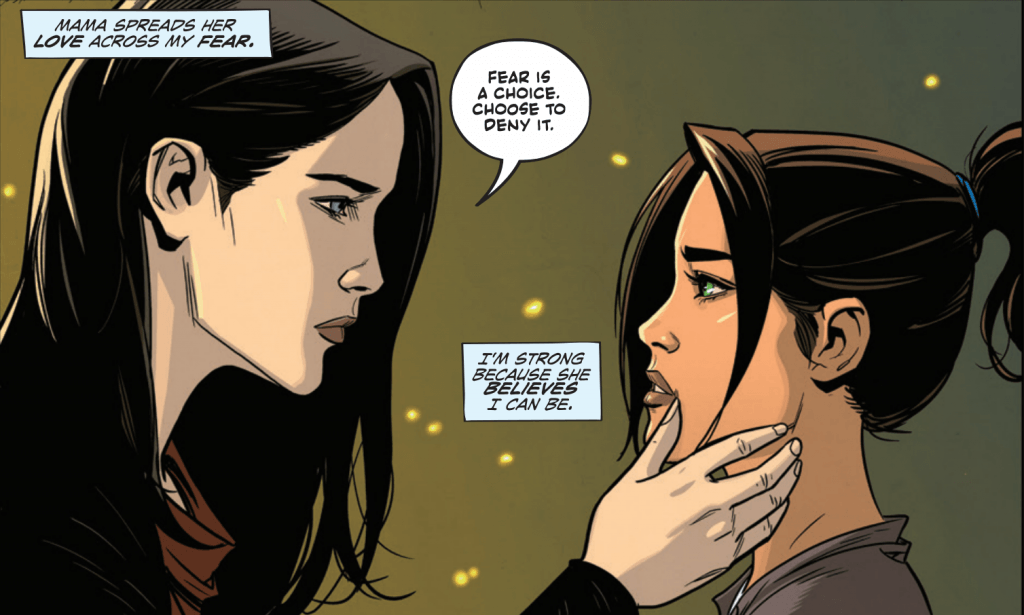 Bryan Hill wastes no time world building. He makes us aware of certain ideals within Romulus that the wolves follow as well as a change that happens upon Axis. We get a look into Ashlar growing up and the things she must learn in order to survive as well as what is required for her to live. Yo, this is some shit that makes Assassin’s Creed look like The Rug Rats playing Hide and Seek man. This shit right here making Marvel’s Illuminati look like The Hangover, yo. Y’all want some clandestine muh fuckas running the world from the shadows? Come on down to Romulus! There are so many great moments within the writing of this series as well. This is only the first issue and Hill’s pacing gets you involved quickly within the story and universe.

I found myself reading the story and worrying that I’d see that dreaded “to be continued” too soon, but to my amazement, I’d gotten to know so much of Ashlar and when I checked the page count I still had 15 more pages to go. I said, “Oh word?” Usually world building can take a good, methodical long time for that perfect delivery (looks at The gawd of world building, Jonathan Hickman) but when a writer is able to world build and still have space for more? Wooooo, I fux with that. Also, can we talk about how Hill’s dropping some heavy ass lines? Reading through Ashlar’s monologue, I felt like I was at a poetry reading. My man describes a bullet goin’ through someone’s head turning their brain into “pink clouds.” And then this little gem right here.

Yeah, you hear that? That sound of a Kit Kat breaking? Yeah, that’s nothing but BARS! Put that together with Nelson Blake’s art game? Yeah, we got ourselves some fucking heat right here. Ashlar describes her mother as perfect and Blake depicts that in each of her movements. Don’t even let me talk my shit on the fight scenes, man. The fucking fight scenes, bruh? The hand to hand Rock Lee UFC fight scenes? I’m fucking with it. Plus he got Ashlar out here anamorphing herself into a wolf man. Blake is great and does an incredible job with that shit. Visually depicting Ashlar as the wolf she was trained to be all this time and now we are with her on this journey where she has to become something else.

The best thing about this book is that although we’ve seen Ashlar grow up through her backstory, there’s a lot we don’t know about her still or what she is capable of. Ashlar was trained by her mother who we can assume is one of the best and now that their mission takes a bit of a change, we’re going to be seeing Ashlar putting these skills to use. I love a story like that, man. Seeing the character grow from the ground up and shit. Hill gives us a great play by play in one scene where Ashlar knows how her mother would respond but has to find her own way in order to survive and it is all of the glory.

I’m not to sure of the last time I was so excited for a first issue comic I knew nothing about at the beginning but was ready to get the quotes and characters tat’d across the belly by the end. What makes this shit even better? You got a Black creative team giving you this work. Giving your bar after muh fucking bar, yo. Come on man. Look at ya woman’s and dem flossing out here man! LOOK AT YA WOMANS AND DEM WITH THE FRESH ASS KICKS TOO! 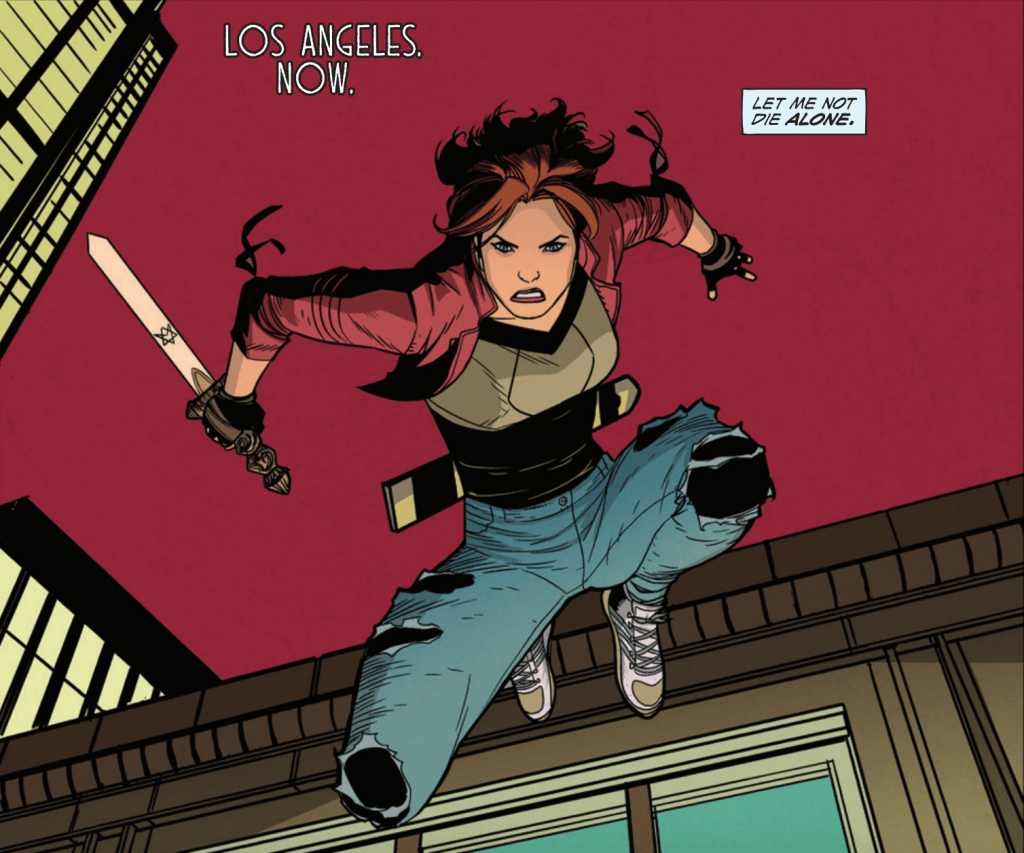 Yeah, this book right here is getting recommended quite highly from me, ain’t no doubt about that shit. I’m really excited to see what this creative team can do with this character. I’m also looking forward to more bars… Wait till you see the shit she says about her sword, yo. I’ma end this review but I’m just trying to point out that sword line goes hard.