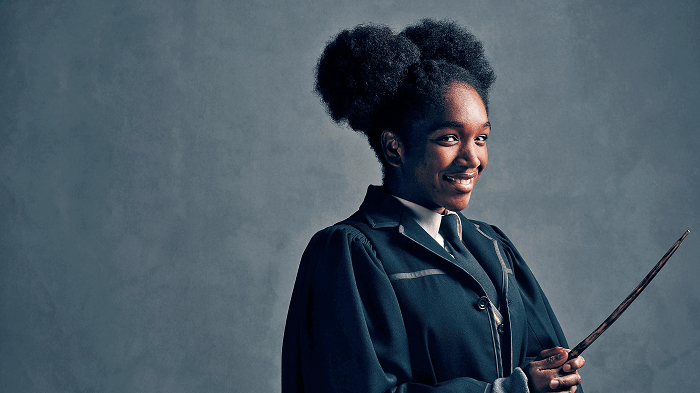 A couple of months ago, I wrote a love letter to Hermione Granger. At this point in time, my love for J.K. Rowling and her casting squad for her new play Harry Potter and the Cursed Child (which is premiering in London on July 30 of this year) had tripled or quadrupled. Honestly, I’d bet my weight in butter beer that J.K. and her squad are connecting with Harry Potter fans on a whole new (previously unforeseen) level. If you didn’t already know, Potterheads go hard in the paint. Representation, though…Beautiful unadulterated representation sans white-washing will have POC who were already fans, sanging (yes, sanging… not singing) “Glorrrrayy!” That’s where this next photo comes in. Yes. That is the Granger-Weasley family. Grown up Ron, grown up Hermione and their baby/tween Rose. They already cast a Black woman as Hermione and now Rose. ROSE!!! Rose is a dark skinned Black girl with two thick and kinky humongous afro puffs, thick lips and a broad nose. She is the product of a mixed race family, but Rose doesn’t look they way most children of mixed race families are often cast. Typically we’re used to the lighter, Cheerios-friendly version of People of Color being portrayed in these (and other) roles. If they had gone with a lighter-skinned version of Rose, a girl who looked a little more “Alicia Keys without makeup,” we would have been okay with that. I would’ve been fine. It would have been a common casting. It would’ve been realistic, right? Right. Truth is, this casting is the realest. It is raw. This casting is no-apologies-even-thought-of-from-beginning-to-end RAW! Why? I’ll tell you why, because this is also what mixed race looks like. People of Color come in all shades. Skin tone is and may forever be a life-long conversation and tool for discrimination. A mixed girl with dark skin is raw because darker skinned women of color (WOC) are often seen as hard and scary. We are still often cast in the mammy-like roles. We often are not cast as pretty or soft; and even when we are, we’re mocked and become a caricature of a person (see almost every role Loretta Devine has played). Cherelle Skeete portraying Rose Granger Weasley is the Ronald Weasley and Hermione Granger combo that we need. She’s the less sought out combination. Her skin is the “oh, I never thought of that” conversation at the water fountain. This Rose Granger Weasley probably isn’t going to be asked “what are you” any time soon, but in the real world out with her parents, especially when she is with her father – there will be questions. There will be responses to her Black.

Those reactions will come in the form of a soft pat on the back in some muggle-owned business who doesn’t know the family, whispered softly in Ron’s ear, telling him how brave he was to adopt such a child. I don’t care what lineage you come from – Muggle born/Pure Blood, those questions are coming. That leads me to think about the Malfoys. Draco’s son and Rose will bump heads at some point. Draco, himself, was constantly calling Hermione a “mud blood” for being Muggle-born. Sooooo… what insult Trumps that (all pun intended)?

So proud to be playing Rose ? https://t.co/MjJmvVNXaD

I have a feeling that my anxiety ridden turn of plot above may not actually present itself in the play, but IRL- this is what happens. I do hope that the conversations that arise from the color of her skin are fruitful and not divisive. Maybe others will take note and stop making representation so flat. I’m happy about the casting. I’m glad that they kept true to the feminist that Hermione is and that she decided to keep her last name. I’m happy to have a Hermione who looks like me and a Rose who looks like so many children who are often overlooked.