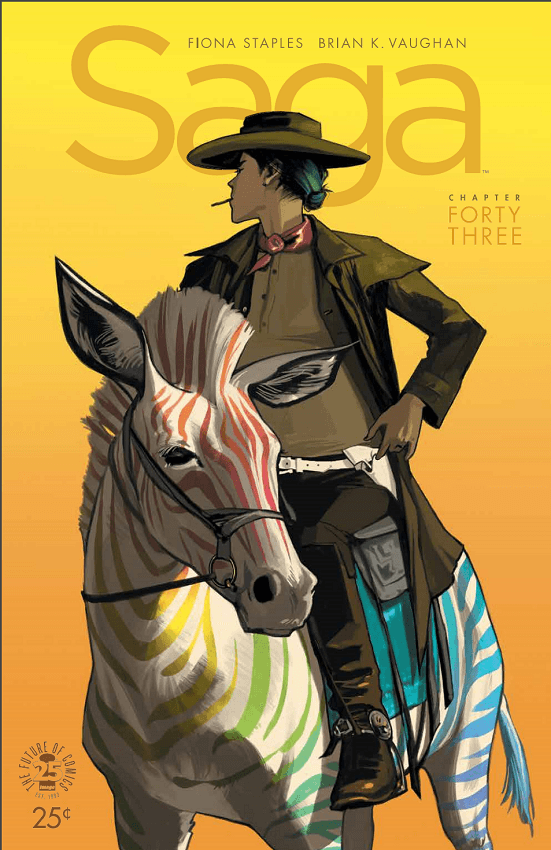 Saga #43 feels like both a continuation of the painfully morbid #42 the story dropped us off a cliff with, and a jumping on point for new fans (new fans, who are you depraved savages?!) as there is a brief “the story thus far” actually in the comic itself. It is a hard reboot, in the narrative as well. The characters feel like they are starting over, in varying degrees of despair or loss when the story begins.

Because this is a Saga book, the art is crisp and inventive and outright amazing. Staples almost never disappoints and this book is no exception. Alana is the cowgirl facing badass we didn’t know we needed, but we absolutely do. She’s drawn so natural in this weird setting (along with her colorful zebra horse, thing…whatever). Overall, it all looks great. Not only are the character models sharp and familiar, but she does so much with facial expressions and mannerisms with such little room to do it.

As for the story, it’s about 94% great. Alana’s journey to take care of her condition, the overt (read: wonderful) politics of Abortion Town (yes, Abortion Town fam) are both funny and hugely relevant to our current political landscape. The flashback of who and how they survived the planet that was devoured, in addition to Hazel’s continued education and maturity are all fascinating, A+ stuff.

But, we gotta talk about, the part.

Petrichor is revealed to be transgender when Hazel, the curious child that she is, asks her about her penis. Petrichor’s response is pitch perfect, speaking about objectification, feelings of others making them feel illegitimate, etc. But Petrichor refers to themselves as transgendered, a term that has been pretty widely shelved as transgender is the accepted and more considerate term. As a cishet man, I’m not in any position to express what is or isn’t offensive to those that identify as transgender, but I was very surprised to see this apparent slip by a creative team that has been very attentive, supportive an apparent provocateur for many marginalized community. I don’t believe any ill intent was at hand considering that it was part of a conversation that was largely supportive and gave voice to a transgender character in their book.

It’s always difficult with fictional stories like this, because when such closely identified language is used, there’s often an argument for it being spoken by a character, and characters can’t be considered as infallible with their language as the author. Still, if you are going to incorporate the struggles and voice of characters such as these, then you have an obligation to get it right. This doesn’t feel like they did.

Possibly, a serious miscalculation on language sticks out in an otherwise surprising and enjoyable issue showing our heroes in new light. No matter the circumstances, its still really good to have Saga back.