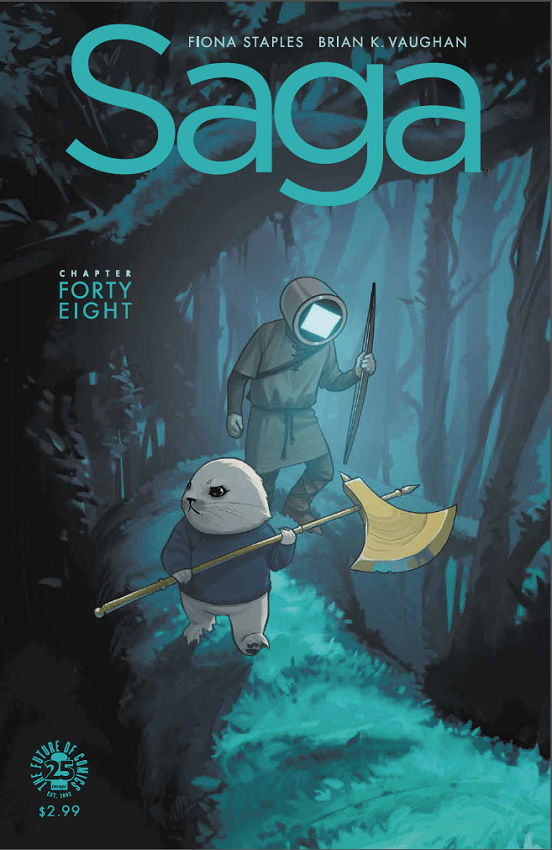 The issue that ends a Saga arc has become quite like the penultimate episode of a Game of Thrones season; it’s often where the big shit happens. Look no further than previous arc-ending issues to see the pile of destroyed feelings from Saga readers who always find a new despair they didn’t know existed. Not so much the case here. Saga goes left of that to bring us a more heartfelt story. It feels different than the usual rhythm if not also a bit out of character. The story focuses on fan favorite Ghüs as he attempts to make an apprentice out of Squire, the son of Prince Robot. Squire had been left behind in the care of Ghüs, so the paternal bond is felt immediately upon seeing them again.

The Story About a Boy Who Broke The Rules

Squire is meant to be the center of this issue. His maturation, awareness, and formal disposition color him as a unique character in this world, except to his father. Squire’s lack of bloodlust or self realization separates him and it will be interesting to see how father and son interact moving forward. The story works well in that fashion, somewhat fleshing out a little seen character. What is just OK for a Saga story however, is the very quick wrap up and the “upbeat” ending. I’m not opposed to things having a cheerful side, but it felt like some things were “yada yada”-ed a bit. 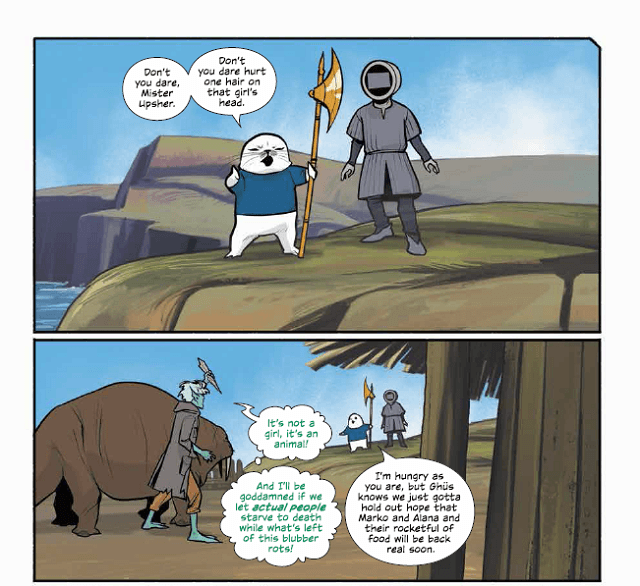 Staples, even with less ambitious things to accomplish this issue, still does a hell of a job. The foreshadowed portrayal of the monster in the woods, with the eventual reveal was satisfying and very Saga. The aesthetic of this book is chiseled into stone and it still feels at home in every panel.

Saga offers us a different arc ending than we’re used to, but we’re probably better for it. Having something nice to look forward to in this book is a plus as opposed to the usual “what the hell happens now” feeling we’re become accustomed to.