Yo, cue the music. Let’s talk about Sci-Fu.


THIS IS A JOURNEY INTO SOUND.

If you read that in the booming voice that preludes action sequences and music videos, there is a very good chance that you’re going to be enamored with Yehudi Mercado’s Sci-Fu, a young adult graphic novel and love letter to hip-hop, kung fu, and science fiction. A great title for all ages, Sci-Fu is colorful, clever, and all-around solid coming-of-age story.

Lookin’ back, well look at that /
Black boy, joy in the face /
Born and raised to never know my place /
Make it suitable enough to hold me space.
-P.O.S., Heater Season by Shredders

After aspiring disc jockey Wax struggles to craft the ultimate-love-song-confessional for his girl-not-quite-next-door, he goes back to his turntables and drops the beat so hard that some aliens who happen to pick up on the frequency figure that his electric tracks are an invitation for abduction because clearly whoever has music that good is asking for a fight. Under some circumstances that might actually be the case, but even if poor Wax was itching to spin, it was probably his vinyl records and not his entire body as he engages in Sci-Fu with a giant robot. It’s the exact type of ridiculous premise that endears the reader to Sci-Fu and Mercado backs up the premise with a wonderfully animated art style and clever writing that is unrelenting in the comedic and serious beats.

Sci-Fi takes cues from the traditional mixtape and feature several “tracks,” a.k.a chapters, that detail Wax’s strange journey. We are a treated to a diverse cast of characters from Brooklyn, including Wax’s sister, best friend, uncle, and Polly the Pirate, the aforementioned crush. Rounding out the cast are the quirky inhabitants of Discopia most notably Kabuki Snowman, who quickly assumes a Mr. Miyagi like role to Wax in unlocking the powers of Wax’s newly found roboticism and sci-fu powers.

If you mashed up Hey Arnold, The Karate Kid, and The Last Starfighter, with dashes of The Get Down, you’d get a pretty close approximation of the general aesthetic of Sci-Fu. Mercado’s ability to blend different all these elements is one of the strengths of the story, and there’s a healthy mix of action, romance, and musicality. The fights are inventive and a joy to watch. All of Wax’s interpersonal realtionships and struggles feel authentic. And there should be a particular note going to Mercado’s lyrically mastery and subtle signaling. All dialog intended to be “rapped” is cued with the use of a character’s emoji and a music. It’s these small touches that help prime the reader and provide personality to those particular panels. The brightly color-set pieces are wonderfully saturated in color, although at times it does pop maybe a little too much. 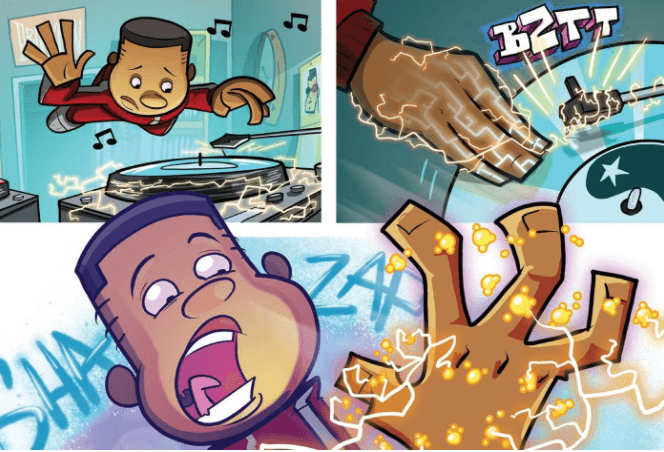 The intended audience is going to devour the story, and the older folks will appreciate the callbacks and the whole plot references. It’s a love letter of various 80’s pop culture translated for the next generation, with all the tropes and quirks you’d expect from a work like that.

My few grievances of the work are minor. It’s a little disheartened that the Asian representation comes from Kabuki Snowman and a robot with a Fu Manchu. The pacing oscillates between lightning fast and surprisingly slow with little warning. Wax is the only character that gets a properly fleshed out arc, and some of the supporting cast doesn’t get too much to do despite a strong introduction. Some plot points in the last act are a little out there. But those are all small complaints in the grand scheme.

By the time I finished reading Sci-Fu, I had a huge smile on my face. I’d be very excited to see a sequel or animated adaptation. Mercado’s comic could just as well be a beautiful storyboard. Sci-Fu was fun. It had fun bridging the generation gaps. It will be a great gift for the young adults in your life that you may want to get into comics, or maybe just for yourself. 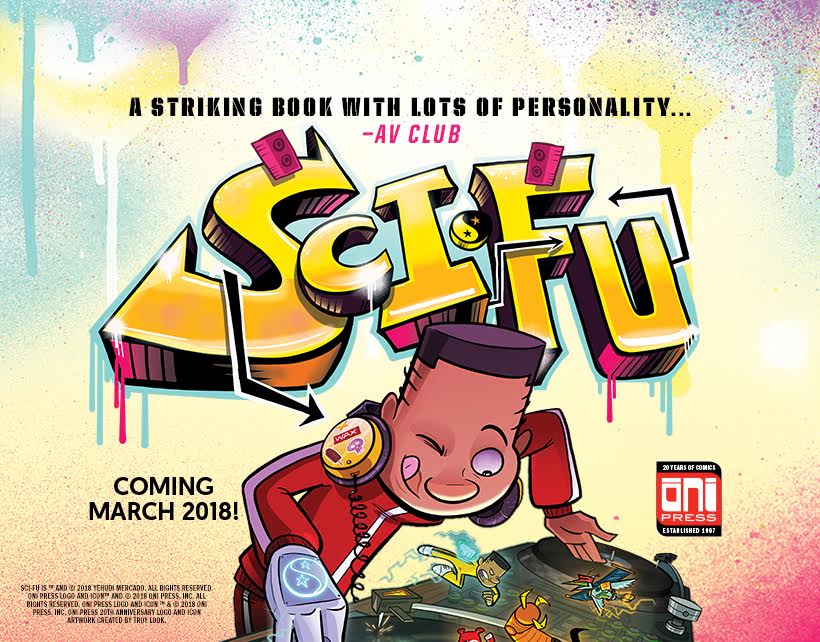 Sci-fu will be officially released March 13th, be sure to ask your local comic book shop to to pre-order for you!