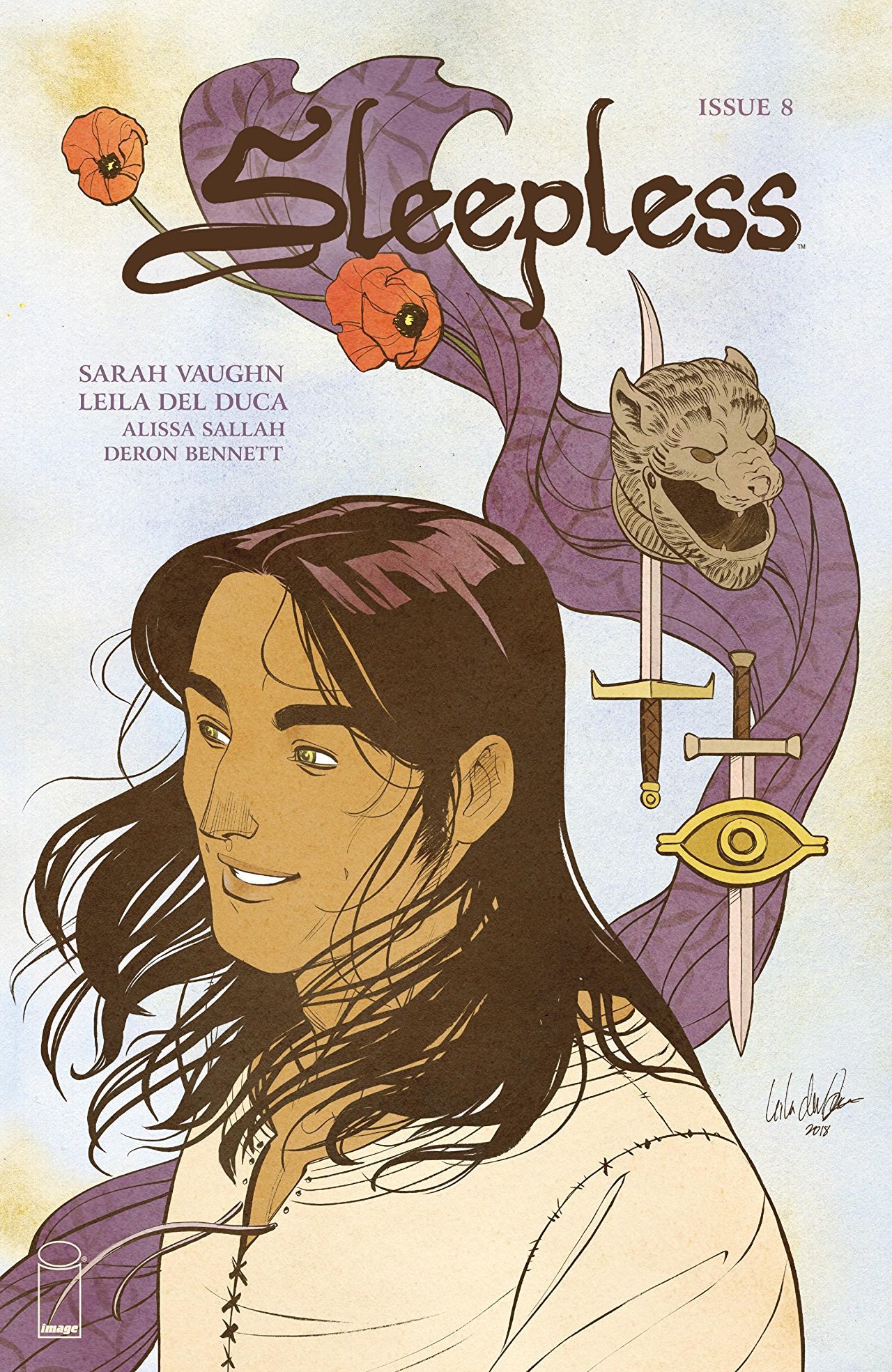 IMMEDIATELY, the first page demonstrates this wonderful sense of urgency regarding the passage of time and the great announcement of one very important person that has come back into the land of the…not sleeping. Poppy’s mad dash to get out of bed and probably run to go see him is one whole page of this comic. Such a page is often done by the creative team for this series to show an important part of the story that always seems to catch my eye. And I love it. 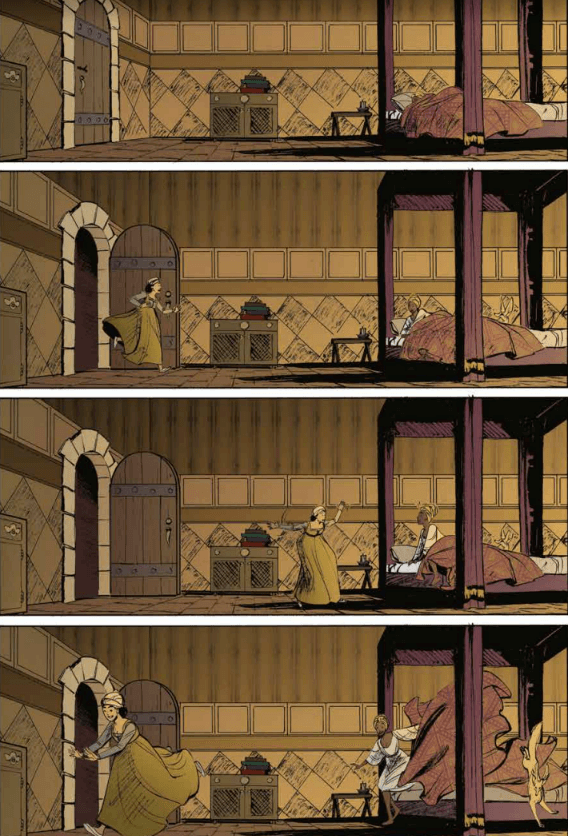 Cyrenic’s fall to sleep by the one he once swore an oath to, Poppy, is over and he’s up and about. It’s a miracle and also a feat apparently not seen by the Sleepless Order, or any one in the kingdom, so he’s crowded as he’s adjusting back to being…not dozing off. It’s a bit fun to see him being a bit more natural and less stone-like as we’ve known him to be. It makes me wonder just how much more of this newer self we’ll get in the narrative from here on out. As entertaining as it is, it’s eye opening to see Cyrenic as the center of everyone’s attention–he’s always been called to serve, to protect, to stand guard, to fight. Now he’s being seen as phenomenal: not quite a Sleepless knight anymore, but also not quite whoever or whatever he used to be. He’s unattached, not assigned to a post or person–he’s without a tether so to speak. I’m praying that he doesn’t become used for and/or by any nefarious persons. 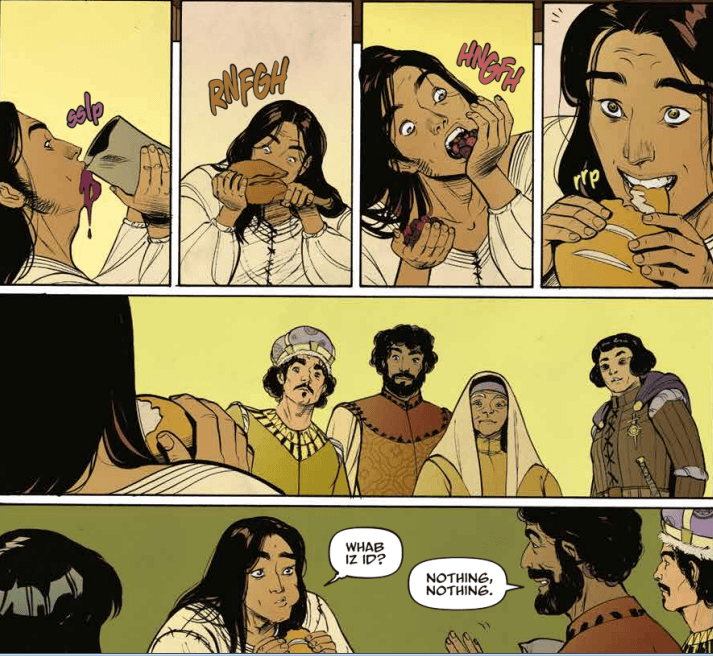 On the art side, it’s fun to see the comedic effect Cyrenic is giving off in the earlier part of this issue. Later, we are treated to closeups of his more sorrowful and storming within looks. He’s a man out of time, a man who hasn’t aged with time, who has woken up without much placemarker or purpose. With muted colored backgrounds by colorist Sallah, his meeting Poppy again isn’t a happy affair, and they both look worse for wear afterwards with the preparations for the wedding of Poppy and Helder coming soon: in less than a week! 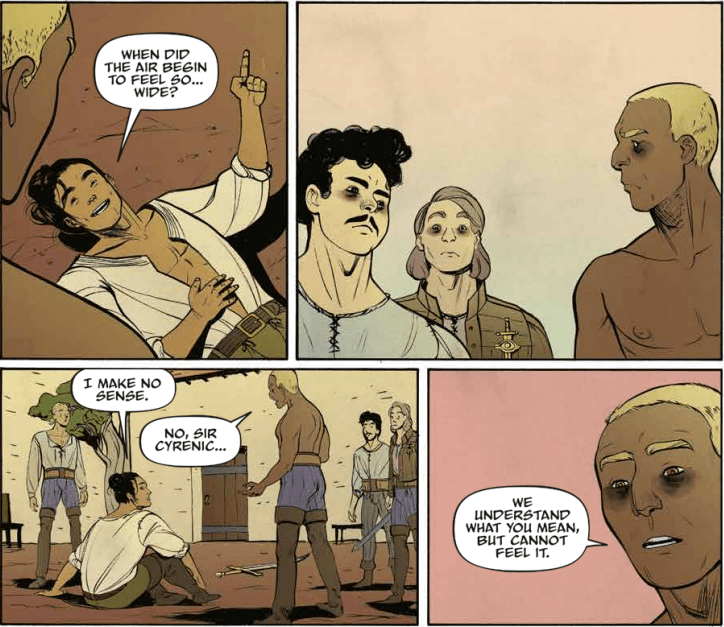 The rest of the issue mercilessly shows us the distance between them as one prepares for a new union, a new person at their side, and the other wanders and adheres to no agenda, no schedule. This issue seems to be a character spotlight on Cy, and I’m quite alright with that. As much as this is Poppy and Cy’s story, this new development needed the time and writing to build on what this now means for Cy. How will this effect his relationship with the one he once swore an oath to–Poppy–which has suffered greatly?

When we speak about agency as a theme of this series, so often I focus on our favorite Princess Pop and, more recently, other women in the castle in positions of power: like Rellen. That’s a necessary topic to ponder when reading and reviewing this series. Nothing wrong there. I have to admit I’ve paid incredibly less attention to Cyrenic in comparion. At times, I’ve considered our princess to have more agency, more power–and that much is true in some regards: by birth she is a princess regardless of her mother’s station in life: her father’s mistress. She’s inherited land from her father which was meant to give her a position in society yet it has only weighed her down. She’s tied to the castle, a place where’s she kept and been the target of near assassinations and poisoning attempts. She’s also being married off by the King’s order, a decision she can’t back away from.

Towards the middle of this issue as Cyrenic is meeting with one of the castle’s advisers, who is a supporter of Poppy. In so much detail, he tells our not so sleeping beauty, that for the first time in a long time he’s free of quite a bit. Pop released him, and this may very well be a time that the Sleepless aren’t needed, a change that may happen in this new king’s rule.

Many changes are happening, some not to the people’s liking. Cy is stunned as it’s never been up to him to make a decision about where his life will lead. The last words of this conversation hit me the most: “You have time to consider…And your choices are as vast as the sky.” When thinking of the visual of the sky in this series, it is the windows and rooftops that Poppy likes to find herself at, especially on the roof for stargazing. Now it seems, with her impending marriage, her sky is getting smaller and smaller. Her way out of this place, her prison, is slipping between her fingers just as Cyrenic’s is opening up. It’s a fascinating juxtaposition that’s seen and felt especially well in this issue, and heartbreaking to not see the two at each other’s side.

This issue ends on a cliff-hanging note of a brave girl, no, a brave young woman stepping out to meet her destiny, without her faithful companion, protector, and friend at her side.