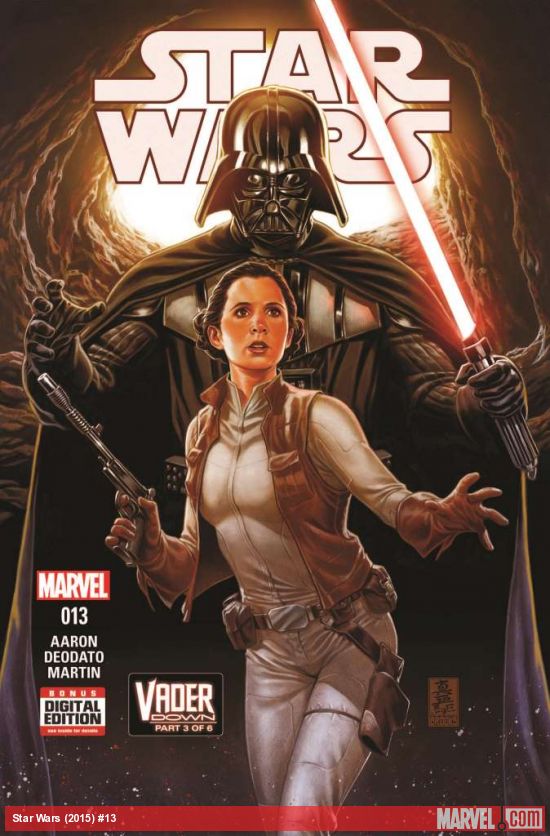 The whole reason I was excited about Star Wars coming home to Marvel where it belongs is that I get to read a Marvel book that gives me the option of reading it on its own without being worried I have to pick up other shit to know what’s happening. If you’ve seen the original trilogy, you’ve done all the homework you need. But Marvel will be Marvel, so if there’s a way to squeeze dollar bills out of a good thing, they’ll figure it out. So, now we have Star Wars tying into the SW universe-wide Vader Down event.

Issue #13 has Luke Skywalker in over his head as usual, trapped on Vrogas Vas with Darth Vader and his entourage. One on hand, Jason Aaron has the formula down pretty good: Luke ends up in trouble, has no idea what he’s doing while Han and Leia scoop in to save the day…and get into even more trouble. All the basic tenets of what makes Aaron’s series work is very much there. The only trouble is that after the last issue’s events, you feel dropped in the middle of a story you didn’t get time to build with.

Everything in issue 1 through 12 seemed to build upon itself while Issue #13 makes you feel like you stepped away from this book for two weeks and the shit hit the fan without you. Fortunately, the crossover has the incomparable Mike Deodato on the artwork, killing it. As great as Stuart Immonen has been on the series, anytime you have Deodato on your book, it’s an immediate blessing.

Bottom Line: This is a great book if you’ve been keeping up with Vader Down. If you’re just in it for Aaron’s series, you’re gonna feel like you just walked into a party where everyone was talking about you and isn’t telling you.