Masashi Kishimoto, the writer and illustrator of Naruto, has had his ups and downs in terms of the characters and story decisions he’s made in the manga and anime Naruto. Sometimes the way characters were used could have been better as well, but let’s talk about one of the many things he did right. Let’s talk about one of, if not the best fight in Naruto, Gaara vs. Rock Lee.

This fight is on a lot of fan’s top 10’s and top 5 lists of fights in the series Naruto and it’s for good reason. Now how does a fight that’s not even half as long as most Naruto fights and also doesn’t even involve any main characters get into everyone’s top lists? Well, the answer is simple, this fight tells a story. This is the story of Gaara vs. Rock Lee.

We begin our story with the first time we see both of our combatants. Rock Lee is an obvious contender for comic relief with his appearance. Dawning a green jumpsuit and orange leg warmers Rock Lee quickly took over the scenery. Let’s not forget his crush on Sakura which added to his comedic tone. His bowl haircut, his eyebrows, his cool guy pose, all of these should just put him on the long list of comedic relief characters, but it didn’t. This all served as a means for us to fall in love with him as a character, not to mention the fact that he straight up whoops Sasuke’s ass for us. 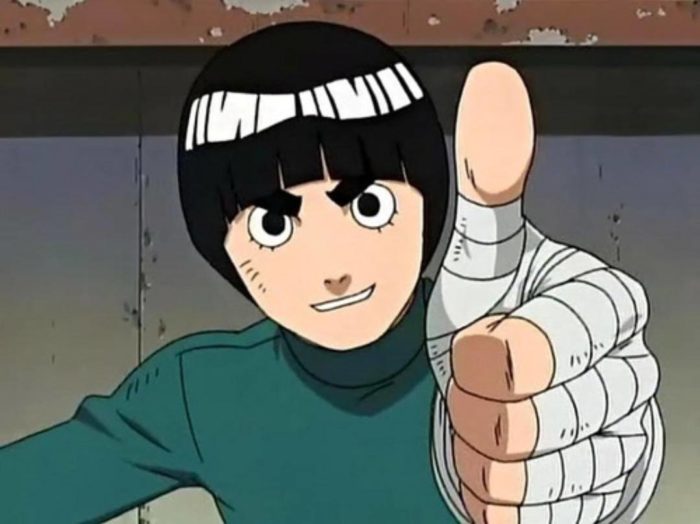 Let’s move on to the first time we see Gaara. Other than the fact that Gaara’s skills and super sneaky ninja-ness make Sasuke a little scared himself. We’re immediately taught to fear him. We immediately know that he’s the strongest of the genin that we’ve seen so far. His personality is cold, calculating, distant. His appearance is simple with a hint of mystery to it. Red hair, a giant gourd, and darkness under his eyes, he looks like a strong dude. His introduction is short but effective. With his simple, non-comedic introduction and appearance, he is the exact opposite of Rock Lee. 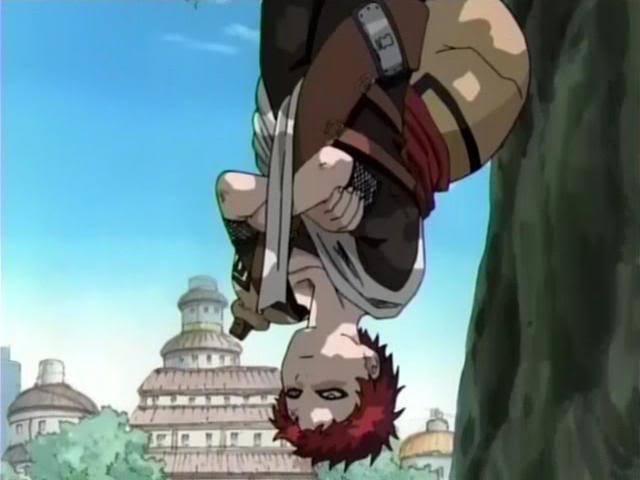 On to the Forest of Death where the story gets more fleshed out. Rock Lee, after being comedic relief with a hint of strength to him, shows a little more of his skills. He fights off 3 sound ninja by himself to protect Sakura who he only has a comedic crush on but is willing to put his life on the line for her. Quickly, it’s shown that Rock Lee has an extremely high amount of skill and heart as we see that he cherishes his friends no matter how well he actually knows them. He also holds back some of his strength here, which allows us to see that he’s even stronger than what we’ve seen in this fight.

Gaara’s experience in the Forest of Death is a little different. He just straight up kills people. Blood raining down all over the forest from his Sand Coffin and showing that he can win a 1 v 3 handicap match solidifies him as a scary, strong, evil contender in the chunin exam. Gaara and Rock Lee both went 1 v 3 in the forest. Rock Lee, struggling, but ultimately being defeated, and Gaara easily killing his opponents. Not to mention that Gaara easily kills one of the genin that Rock Lee had trouble with after the forest of death.

Now we get to the climax of our story, the preliminaries. So far the fights have been very “meh” to say the least. Although Hinata vs. Neji carried the preliminaries the overall fights weren’t very good. Temari vs. Tenten only served to make us dislike the sand ninja more but it did give Rock Lee an opportunity to show his speed again.

It’s announced. The next fight will be Gaara vs. Rock Lee. Everyone is expecting Lee to be scared or afraid and instead, Lee is excited. Lee isn’t scared and he has never been in all the time we’ve seen him so far. Whether it was professing his overbearing love to Sakura, facing an Uchiha with a Sharingan, or going 1 v 3 in a losing battle he’s shown no fear. His comedic relief attitude is shifted into an attitude of pure confidence. This is when the stories of both of them clash and come to fruition. Gaara is ready to overwhelm Rock Lee and kill him, while Lee is just excited to finally get to fight. A true clash of characters and personalities.

The fight starts with Rock Lee attempting to get through Gaara’s ultimate sand defense. Every time Rock Lee tries to get a hit in the sand automatically stops him. Combine this with the character’s thoughts and expressions it creates a great atmosphere. The spectators are continuously saying how futile it is for Rock Lee to even try and this is all capped off by Guy-sensei explaining that Rock Lee can’t use ninjutsu or genjutsu and he can only use Taijutsu (hand to hand combat). This puts this fight in an even better light with even higher stakes. Gaara, someone who has a jutsu that is not only unique but extremely powerful and Rock Lee who basically only punches and kicks.

Fast Forward a little and we get to a special moment in the fight. After Rock Lee tries to land a hit and fails multiple times he jumps back to assess the situation and Guy yells “ALRIGHT LEE TAKE EM OFF.” Even in this situation, Rock Lee questions him because of his honor and his admiration for his sensei. Rock Lee was told only to take off the weights in a last-ditch effort to protect loved ones and he wasn’t going to take them off until that situation arose. Instead, Guy says it’s ok and he proceeds to take off the weights. This moment is still one of the best in Naruto history. The way the weights hit the ground. The way the characters react. The way Gaara is still unfazed because of how strong he is and how weak he feels Lee is. Now it’s time to fight.

Rock Lee goes at an almost lightning speed, actually disappearing, confusing Gaara’s ultimate defense and landing a few good hits on Gaara who has never been hit or hurt his whole life according to his siblings. Rock Lee is proving that he’s no longer comedic relief and that Gaara is no longer the untouchable monster he was before the fight began. Rock Lee is showing everyone that he should be taken seriously and Gaara is starting to snap. Lee attempts to use one of his Ultimate Moves the Front Lotus (Primary Lotus) on Gaara but because of the strain, it puts on Lee’s body Gaara is able to escape it.

Weakened by the strain on his body Gaara is blood lusted and starts to play with Lee by knocking him around and trying to humiliate him. Still, Rock Lee doesn’t give up because he wants to show that even without ninjutsu and genjutsu he can still be a splendid ninja. That is his Nindo (Ninja Way) and that’s why he doesn’t give up even with all the disadvantages and pain he’s going through.

Rock Lee gets a second wind and goes on the offensive, it’s time to end this. Rock Lee unlocks his chakra gates which put an even greater strain on his body and has everyone in the arena in awe. Even Gaara is taken aback by this and with all of his strength all of his power, all of his will he uses his final move, the reverse lotus. The attack is so strenuous that you can see his body breaking. You can see that Lee is in pain while using it but he pushes through and delivers his attack. The attack is so powerful and fast that some can barely follow his movements with their eyes. The ground breaks and the arena becomes unusable and the fight is over.

Gaara lies on the ground immobile and Lee is so broken up that he might as well be immobile himself. Just when we think that maybe Rock Lee has won Gaara is awake albeit barely able to move his arm but still, he’s awake. Gaara uses his sand to grab Rock Lee’s arm and leg and breaks both of them. 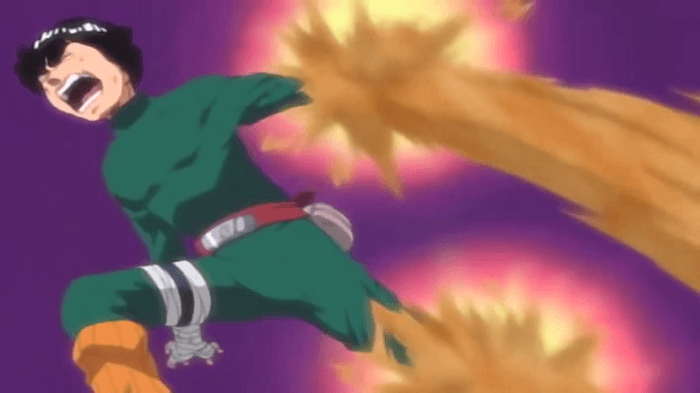 Lee passes out and Gaara was willing to break more. Guy sensei steps in to stop Gaara from killing his student and in one of the most beautiful and heart-wrenching moments Rock Lee’s body stands up. Unconscious, with a broken arm and leg his mind and soul is still ready to fight even when his body can barely stand. Gaara gets up and walks away and Rock Lee is left unconscious and the story of Rock Lee vs. Gaara comes to its end.

Rock Lee vs. Gaara was a fight that was in the making during the entire chunin exam arc. From their first appearances to their meeting it created a great story. Rock Lee the comedic relief with much more to him that we could have ever thought could be possible. Gaara and his overwhelming strength and villainy which was captured well with his voice and mannerisms.

The clash of the different types of characters. One gifted with an ultimate defense, and ultimate killing jutsu. One, gifted with determination and a pure heart. These things are what made this fight one of the best fights in Naruto. It made us believe in Rock Lee and made us want Gaara to get his just desserts and root for his demise. Gaara vs. Rock Lee wasn’t just a fight, it was a story in itself, and I think that’s why it’ll never be forgotten. The story of this fight will be told for years and years to come and it’ll never grow stale.