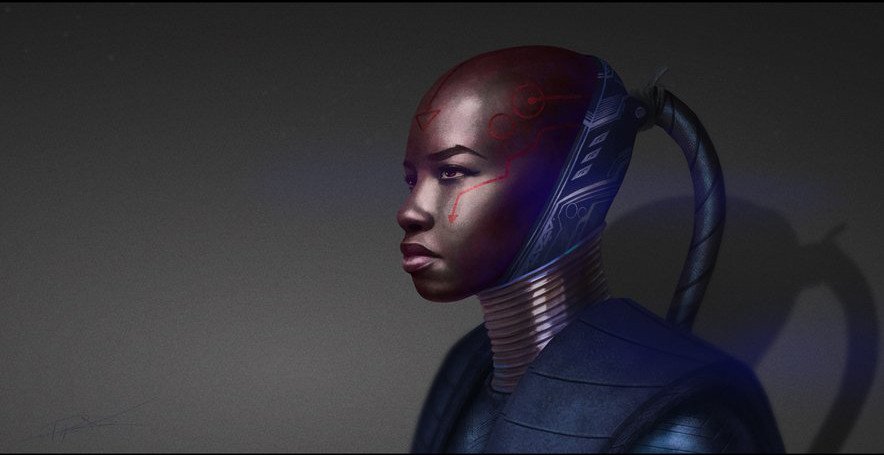 It has been months since Fireside Fiction published their outstanding #BlackSpecFic Special Report — a report so detailed, and damning, of the state of short story magazines and their relationship with Black Speculative Fiction writers that it rises to the level of an indictment on the entire system of genre publishing in the United States. You should read it. If you’re a reader or writer of Black Spec Fic, of any speculative fiction, this report is about you and for you. For some of us, it is painfully unsurprising. A few of the facts there:
[divider type=”space_thin”] 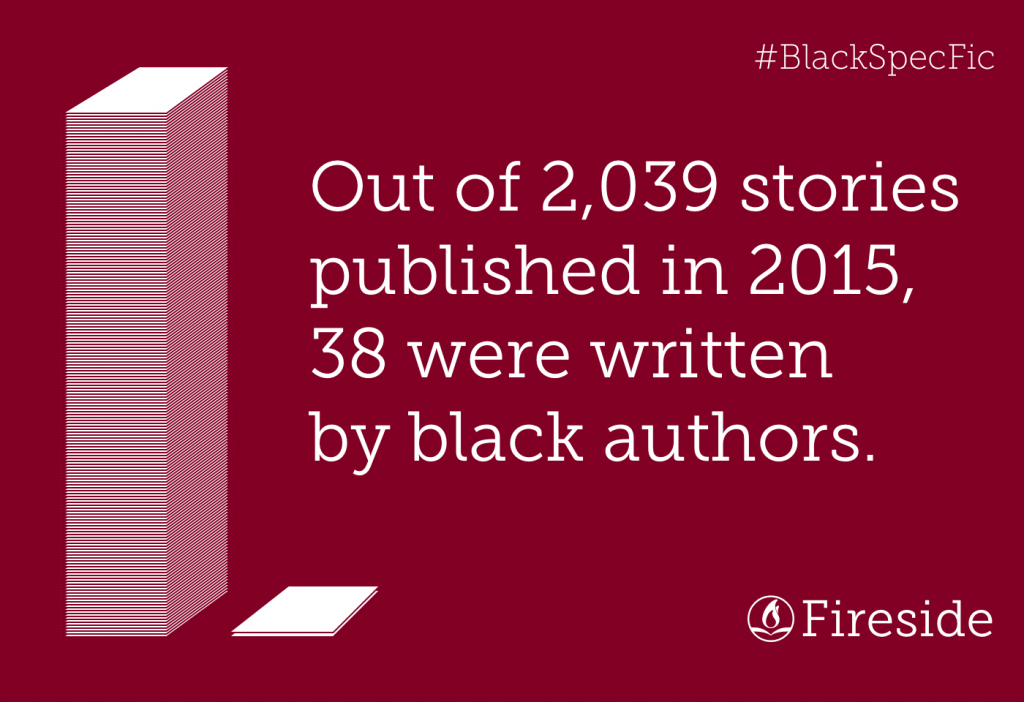 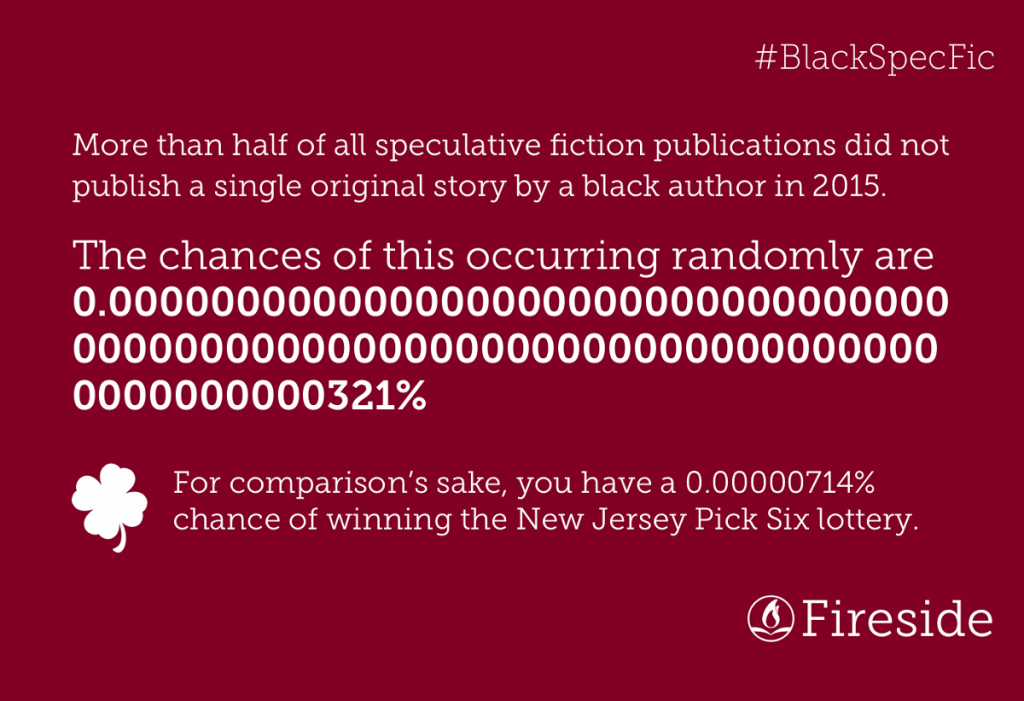 [divider type=”space_thin”]
This report puts numbers to our lived experiences as writers and readers. I’m not so naive as to think it will change the minds of those dead-set against acknowledging those of us already writing in the field. I do think these are the sort of figures that push those who pride themselves on their “diversity” to really evaluate their practices. These are numbers that dare our liberal friends to refute them, and when they can’t, to grapple with what they mean — that speculative fiction has an anti-black bias that is systemic and almost universal.

I’ve sat with this report, reading it again, feeling challenged by it, and perhaps encouraged by the facts of it, the way so many of us feel when we finally can point at an overt act of racism and say: “See, I’m not making this up!”

In response, one of my favorite online thinkers and Black Spec Fic writers, P. Djeli Clark, posted his own thoughts in Submitting (SFF) While Black. As a writer directly impacted by the numbers that Fireside details, he discusses why short story publishing is important, not to the craft of being a writer, but to the craft of becoming a paid one. He then goes on to detail the larger questions that the Fireside Report brings up, and to address each one in turn. His article is definitely again worth your time to read. My sense of vindication from the original report turned to one of defeat as I finished it. There are so many Black writers out there, producing amazing, original work, and the universality of our exclusion continues. It all feels overwhelming, like Black artists are being targeted from all sides.

As a critic, a reader who writes about reading, my perspective is as neither a publisher, which Fireside Fiction is, nor as an aspiring professional fiction writer (I’m a fiction writer but I don’t have grand publishing aspirations). I’m between and outside of these spaces, standing in for those of us who primarily vote with our cash for the kinds of speculative fiction we want to see. I see the direction that the industry is moving, I follow authors, Black and non-Black, and I have a few comments and questions of my own.

Black Indie Publishers
and the Dangerous Weight of Do For Self

There’s no doubt that Black folks have fully embraced the words of every street-corner philosopher since the time of Marcus Garvey: Do For Self. And we are getting to be successful at it. MVMedia publishes books yearly in different Black Speculative Fiction genres, most recently Dark Universe (Space Opera). Rosarium Publishing recently successfully completed their crowd-funding campaign to allow them to expand their offerings. The books are out there. And add to that the self-publishing options that Amazon, Kickstarter, Indiegogo and Patreon present, and the possibilities expand. This is a real, organic empowerment that allows Black writers and publishers to get out into the marketplace and make their own money from their creative work. But does that mean we have to cede the mainstream when we make our own way?

What level of segregation are we headed towards when we get comfortable with having ONLY our own publications as our voice in the genre? And what alternative sources of success, cash flow, and critical acclaim are we walking away from? Can we not have both our own publications and inclusion in “mainstream” works, thereby reaching wider audiences and providing opportunities for more writers? This is an eternal debate, and one which there need never be a solution to. But it is one we need to continue to have, in conjunction with a dedication to support both “streams” of production when possible, so that we pressure the industry both from within and without.

Brain Drain to Other Creative Endeavors

With the odds stacked so squarely against Black writers of SFF short stories (and thereby the pipeline to novels), I suspect that more burgeoning writers are moving to other media — Comics/Graphic Novels most notably — where we continue to enjoy slowly growing success. For every new novel, even independent ones, I see twice as many comics by Black writers/creators. The bar to access may be lower, the support systems more robust, the numbers needed to count yourself a success easier to achieve. Whatever the reason, we can only imagine how many Black writers have never been published, their works sitting in drawers and on dusty hard drives.

Now there is some consolation that a portion of those writers will find their way to a medium that is more welcoming. While that may be a net win for us as readers, it is a loss for Speculative Fiction as a whole. When new writers abandon the system, or are pushed out of it, a fresh vitality is lost. This leaves readers with fewer choices that reflect the world we live in now and imagine the worlds we want to live in in the future. It lessens what this genre is capable of.

The Curse of the Anthology

One of the primary tools of the publishing industry in the last many years to address gaps in diversity has been to focus on themed anthologies. This started as an admirable way to highlight Black writers. But more and more it has become a way to mash all People of Color together into one “diverse” category, without considering the individual pressures/history of each group. This can give a comforting blanket of “we publish diverse writers” to publications that wouldn’t publish Black authors in their usual quarterly magazine.

I fear that mainstream publishing, out of an unwillingness to truly embrace inclusion on all levels or out of desire to address an issue without rocking the boat too much, funnels Black writers into diversity “special issues”. Not that there is anything wrong with those spaces, as a reader I love them, but they are also still few and necessarily can’t do the work of spreading our work throughout the reading community. And they certainly don’t get the critical attention from reviewers and awards committees that they deserve. Again, I support these focused attempts at bringing new writers to the audience — I buy them whenever I can — but they are only a piece of the solution, and they do nothing to address the overall anti-Black bias of editorial boards and slush readers. Keep them. Read them. Love them. But also demand that publishing do more.

A Few Words of Encouragement

The feeling of defeat is real, y’all. The numbers are so daunting and the sense of “we have always been here” is quickly drowned under “and yet we remain invisible”. I see my peers out there working: writing perfect cover letters, crafting and re-crafting prose, starting reading groups, attending seminars. I see you daring to pitch and submit over and over, abbreviating your name from Kenya to just K. in hopes that it will get you out of the slush pile and onto the editor’s desk. I see you not giving up on this art and this genre, and that makes me not want to give up either. I want to read more books and short stories.I want to consciously give my money and my attention to those publications that are doing it right, that are self-consciously working on improving their publication numbers, reaching out to Black writers, and supporting Black readers.

I buy books and magazines that feature Black authors, edited by Black editors, and I tell others about them. Our real allies are out here, but we have to support each other. I’m a critic because I love the work you do. Please keep doing it. Don’t Self-Reject. Read Rose Lemberg on Marginalized Writers & Self Rejection everyday to yourself if you have to. I’m reading and others are too. We want tales of North African numerology, time-travel stories of Black women in Rome, space opera of Black Texan Cowboys herding the stars — all of that and more. We’ve always been here, readers, writers, critics, fans. And putting numbers to our exclusion doesn’t change the fact that we’ll continue to rage against it. Black Speculative Fiction is an unstoppable genre that impacts and changes all of the media it touches. They keep shooting, and we just keep writing.

Thank you to Fireside Fiction Company, and to Cecily Kane the lead author of the report. It is backed up by a series of essays from writers and editors, all of which are insightful and honest. Thank you also to P. Djeli Clark for sharing his thoughts and suggestions. This is a conversation that should be on-going, these numbers checked regularly to see how far we’ve come, and how much farther the industry has to go.