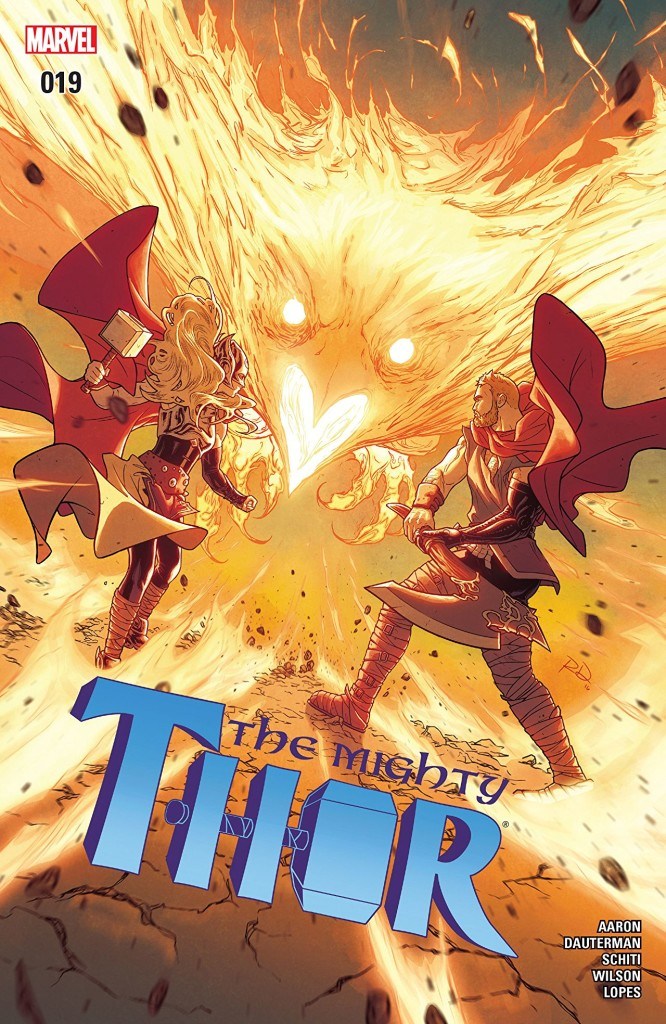 Jason Aaron never ceases to take the Thor mythos to new, more fun heights with each issue. The Mighty Thor is quite likely going to end up in one of Marvel’s essential omnibus collections five years from now guaranteed. Epic, universe spanning fantasy plotlines mixed with classic comic book fun and smart dialogue make this a book to be reckoned with. Every bit as unbeatable as the god it’s about.

Issue #19 marks the finale of the Asgard/Shi’ar War as Thor and Quentin Quire have a showdown against the Phoenix. That sentence alone should be more than enough to let you know how awesome this book really is, but I will continue with the review. As always, Aaron swings for the fences while not necessarily losing his reader. He approaches the big battle in an interesting yet slightly abbreviated way. While the scale the story has been told on is still there, the title fight is resolved quicker than we might like, but you soon see that this book wraps up a lot of story as well as puts a lot into play. The characterizations are pitch perfect at all times and the drama is endearing and lightly seasoned in lightheartedness as to not bring the tone of the book down. Russell Dauterman and Valerio Schiti’s artwork consistently delivers on all the promise of Aaron’s script. I honestly thought these two styles were going to step all over one another but they actually work quite well together. You can almost feel the heat when Thor and Crew are mid-battle in eye of the Phoenix’s storm.

Bottom Line: It’s actually kind of hard to believe Aaron managed to fight that much story into one regular sized book but he managed it without the issue feeling too crowded. Quality wise, there’s not really anything new to report. This is still, by leaps and bounds, some of the best work Marvel has to offer. This book puts the hammer down and never lets up.