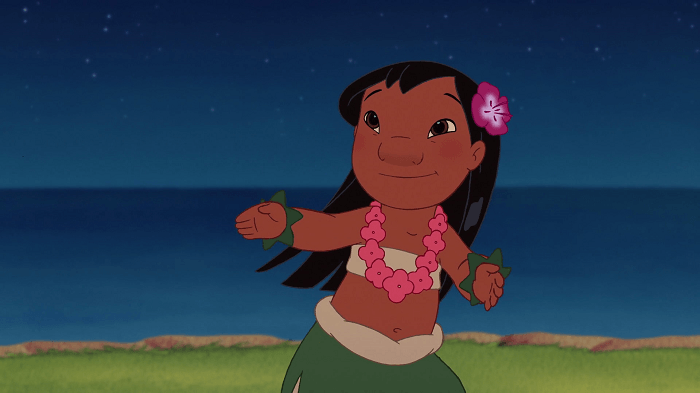 This has been sitting on me a long time, where to start my contribution to the storied Top 5 Dead or Alive series, but it has finally come time. I saw Moana the other weekend with my kid (Read our review, then go see it. It will rearrange your expectations of Disney.) and got into a long conversation with her about who my favorite Princess was — this is serious business among 5-year-olds — during which I just kept coming back to Lilo: Lilo the not-a-princess, beat-down-throwing, wild-alien-taming Hawaiian who lives with her sister Nani and generally terrorizes her end of the island of Kauaʻi. No Disney heroine or villain deserves the honor of the Top 5 more, none is more complex or more hilarious, and none is as under-rated or under-appreciated. Lilo is the up-down, right-left, and all-around trillest Disney heroine ever, and here, she’s gonna get her due. Lilo Pelekai (yes, she has a family name, get with the Google my friends) is Ace Number 1 in my Top 5 Dead or Alive: Disney Edition.

1) “I break chains all by myself
Won’t Let my freedom rot in hell
Hey, I’mma keep running
‘Cause a Winner don’t quit on themselves.”

When I first saw the opening, where Lilo takes a picture of the white tourist who has lost his ice cream, I laughed out loud. Lilo will flip the script on a body in a minute — turning the observer into the observed — with style. Let’s be honest, 5 minutes before, you wanna bet that tourist was trying to take her picture, being “native” and “natural”? Now she’s demanding her right to be the subject, not the object, on her own island in her own hometown. And then to find out she collects these pictures? As her own hilarious, bizarre museum of white tourists? You know from just this bit that this is Lilo’s story, from her perspective, and she’s not going to let anyone take that objectivity from her. Besides, cruel and painful as it may be, for those of us who don’t sunburn, seeing lobster-red white dudes on the beach is funny.

2) “Me steady rhyming, and I’m so sick and tired of
Being forced to put suckers in their place
You make me mad enough to punch you in the face…
Try to play me, cease it, you don’t know me”

This scene is from Stitch Has a Glitch, in case you’re not as versed in the Lilo universe as I am. This is not the first time, nor the last, that Lilo has to put Myrtle, and the other little snot-nosed 7-year-olds of the island, in their place for making fun of her toys, her style, her commitments (sometimes you have to give sandwiches to the fishes), or her family. I’m not saying that I encourage my kid to get into fist fights in the schoolyard, but I will say that if I were dearly departed and my kid threw a whooping in my good name, I’d be damn proud. Lilo stands up for what’s important and takes no shit, especially from folks who don’t know what they’re talking about. That is admirable. If Cinderella were even half this assertive, those stepsisters would have been managed long ago.

That’s it. That’s why she picks him. Her ability to read past the outward appearance to the reality inside another creature, and her confidence in that ability, is what sets Lilo apart. It extends to everything and person she encounters — David, the other aliens, Mr. Bubbles (aside here to give Mr. Cobra Bubbles his due as perhaps Disney’s best FBI agent). Her assessments are not a naivete, but a sharp eye, that extends to herself. She knows she isn’t like other kids and embraces it.

Sure she wants some normalcy in her life, to have her parents back for example, but she never wishes to be normal. She definitely struggles with the gap between her intentions and her results, learning that regardless of what’s she’s trying to do, she is making Nani’s life — and therefore her own — more difficult. But even that doesn’t lead to her wanting to change herself, only finding ways to channel that energy and desire in more productive ways. She only wants to live her best, truest, life and she knows she can give that to Stitch too, even when he thinks it something he can’t have.

4) “I’m the first to issue an admission of my bad behavior
I’m a mouthy little drunk and I’m a tyrant when I’m angry
Clumsy with company, careful with family
Break bones before promises, throw stones before towels”

This is the theme of the movie: Ohana means family, and family means no one gets left behind or forgotten. But it goes beyond a motto for Lilo. It drives everything she does. Why is she feeding sandwiches to fishes? To commune with them over the death of her parents. Why does she fight with Myrtle? Because that loud-mouth deserved it. Why does she fight with Nani her sister? Well because that’s what sisters do, but also all they have is each other and the intensity of that dependency is extreme, and perhaps a little desperate. They are all each other has. They know, as Stitch says at the end, that their family…

Her dedication to her family is infectious, pulling in Jumba (the evil scientist) and Pleakley (the mild-mannered academic), who go out of their way to protect Stitch from Captain Gantu and the United Intergalactic Federation, despite their own orders. In the end, her Ohana is no longer little, though it is still quite weird by some standards.

I live a life of adopted and blended families, families of choice mixing with families of blood. This message, that you can and should define who is family and whom you embrace and take responsibility for, is so much deeper and more real than any other Disney “family” lesson. Lilo and Nani were showing the power and love of sisterhood 10 years before Elsa and Anna hit the streets. 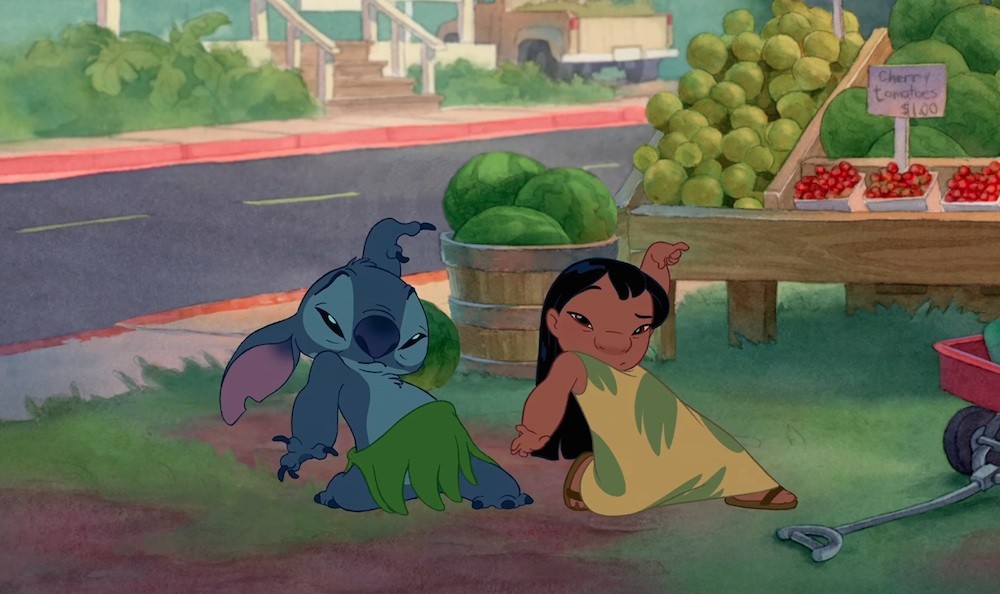 Lilo is adamantly not a princess. That matters on multiple levels. Disney traditionally has made it’s bread and butter selling a heteronormative, hierarchical relationship model that positions primary connections as being between men and women, with women gaining access to power and authority through that relationship. That is, princess-ness is something that is conferred either by the father or the husband of the “main” character — she must marry the prince to come into her own. As such, this representation shuts out…well…a lot of other positions. This is a pattern that is changing. Moana, for example, has no romantic lead, but it does have a male father figure in Maui. Frozen is famously a story that centers the relationship between two sisters, but there is romance. However, Lilo’s primary relationship is with an alien pet and the identity of her father is important only insofar as he is absent.

Being a non-princess story, Lilo doesn’t have any of that baggage — she is who she is all by her self. She provides an outlet of representation for kids, girls in particular, for whom princess-ness has less attraction, or who are not yet enamored with heterosexual romance. You can love Lilo and not like boys in a way that being a fan of Ariel doesn’t really allow. There is no class aspiration, no rags to riches, and no male savior. Her “weirdness”, her fascination with Elvis and tumors, her lack of grace — all sets her up as an anti-princess and as such she presents a rare breaking of the Disney mold. Further, she and Nani were the first Disney female characters who wouldn’t fit in size 5 dress. What? Size equality too? Yes, I’m telling you, Lilo is the truth.

Almost 17 years later, Lilo remains a favorite. She and Stitch still feature in stage shows at Disneyland, and still sell merch at the Disney store, so I know I’m not the only fan. There is no other non-Disney princess who has brought this much to the game or whom I love more. I’m here for Lilo and her family. Ohana to the end.