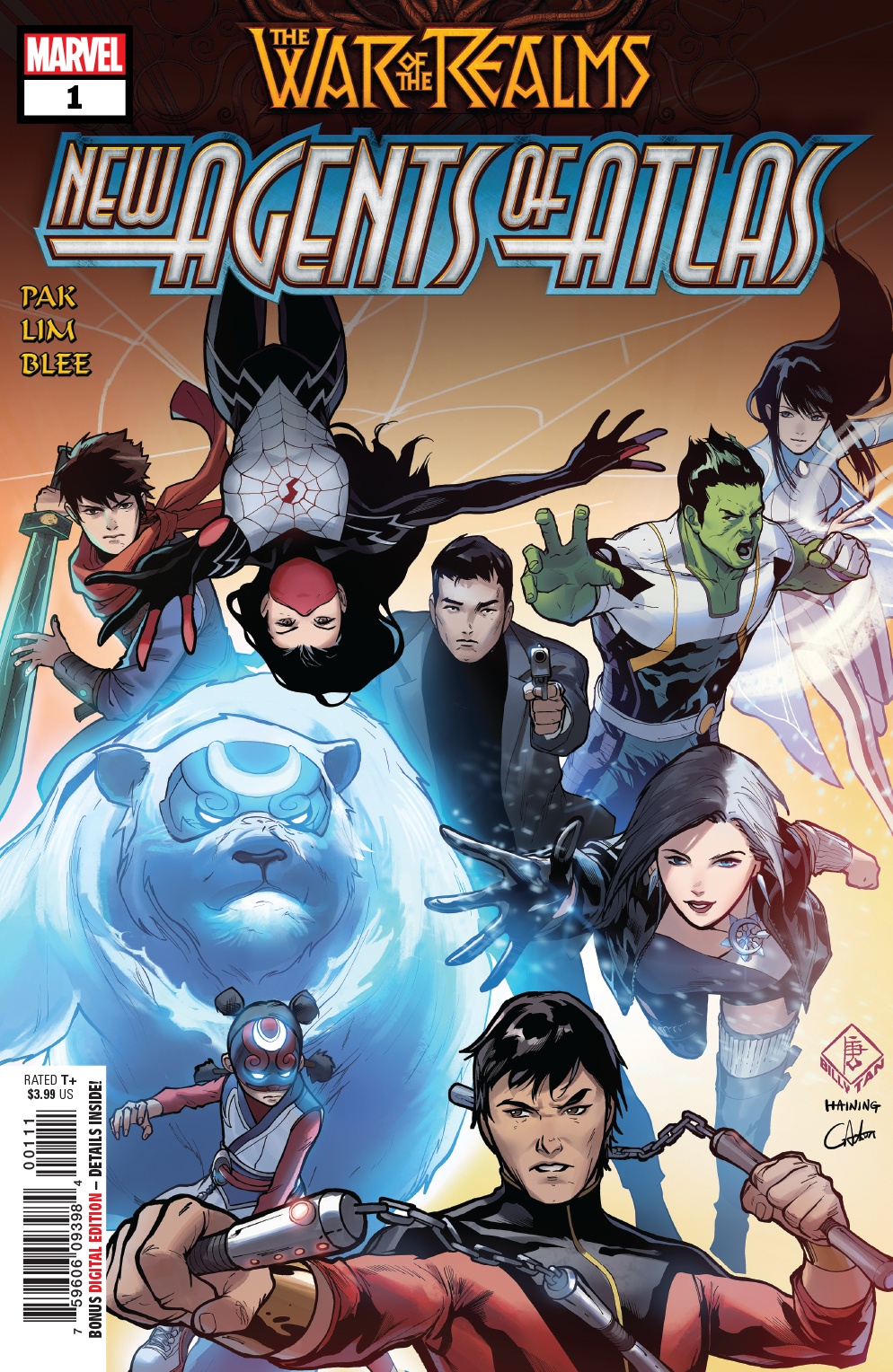 Within the first few pages of The War of the Realms: New Agents of Atlas #1, we are introduced to no less than seven different Asian and Asian-American heroes. That’s not even everyone involved with this new venture from Greg Pak and Gang Hyuk Lim. Now, full disclosure: I don’t know anything about what’s going on with Marvel’s War of the Realms. I’m mostly here for the ensemble, and I’m exceedingly satisfied with the ensemble’s first outing. 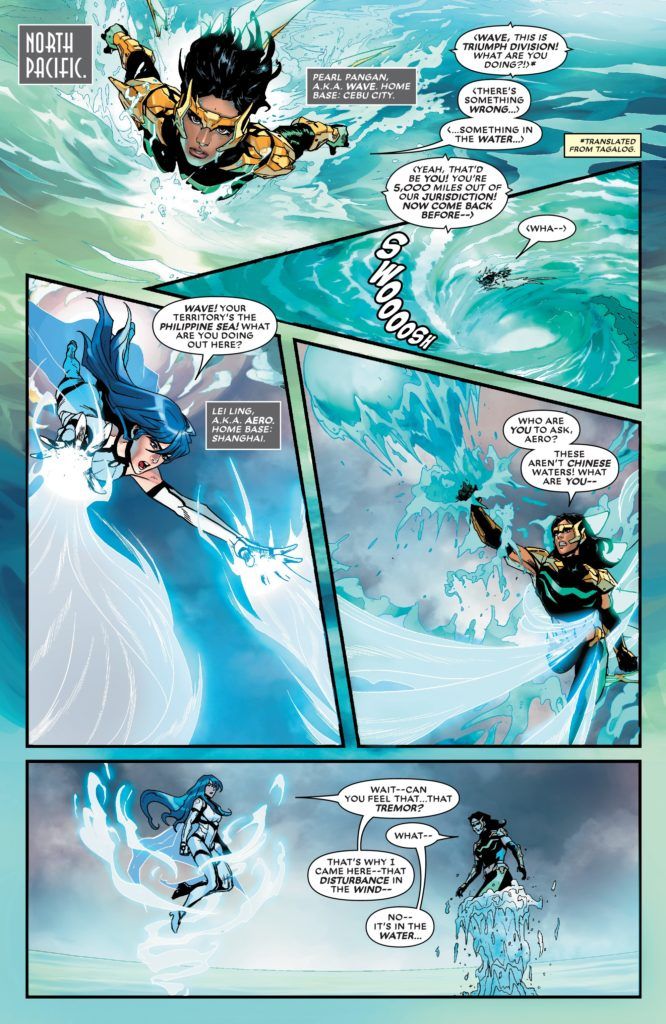 Right off the bat, Pak and Lim have both Peral Pangan (a.k.a. Wave, a.k.a. Marvels’ new Filipina water-centric hero) and Lei Ling (a.k.a. Aero, a.k.a. Marvel’s once previously China-exclusive air-based hero) responding to a weird ecological disturbance in the North Pacific Ocean. Personally, as someone who has scoured comic book archives for Filipino superheroes, seeing the phrase “Translated from Tagalog” is something that just makes me so incredibly happy. Pak and Lim establish the characters perfectly with their verbal and body language. We get a good sense of their personalities, a sense of their history, and their power sets with in a few panels. This type of quick characterization is a boon since we quickly meet Ms. Marvel, Silk, Shang-Chi, Brawn, and Jimmy Woo at the start of the issue’s main plot – with a few more new faces to follow in the back half.

Set against the backdrop of this universe-changing event, Pak maneuvers the large cast of characters into the conflict against the main villain (while also citing some history for longer term readers). The dialog is snappy, clever and has more than enough familiar moments of “oh, yeah. I definitely had that conversation before.” The humor is balanced by dramatic tension, and Pak clearly loves these characters.

Lim’s artwork is a brilliant complement to the text. Their depiction of the New Agents of Atlas is dynamic and engaging, and the primary set pieces are jaw-droppingly gorgeous staging for the inciting incidents. It’s a wonderful pairing that works on multiple levels. 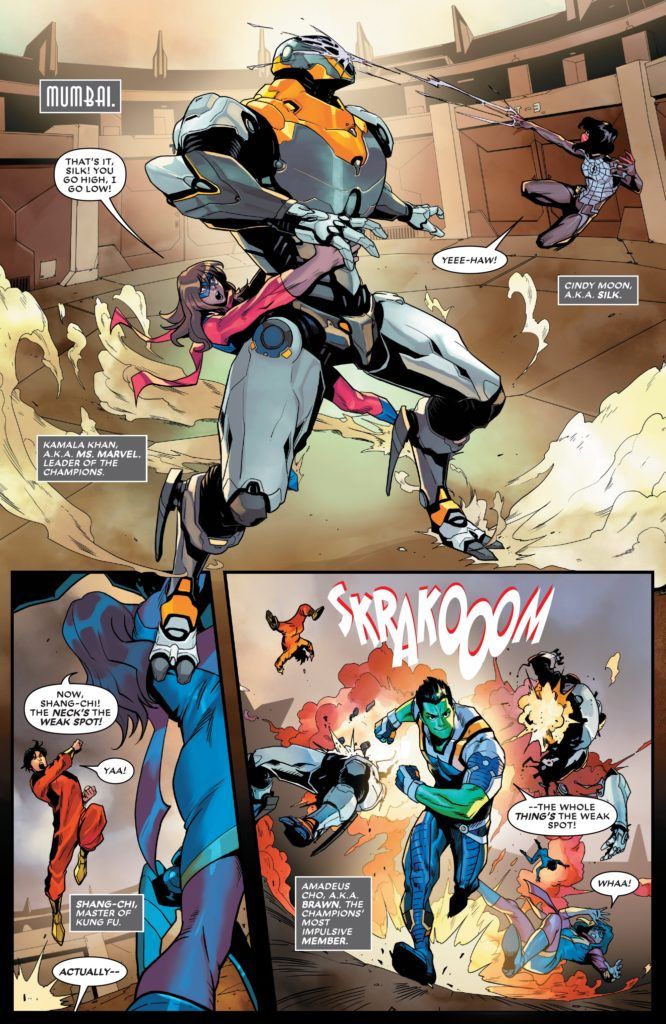 While I can’t speak for how well New Agents of Atlas ties in with the grander myth arc, I can safely it works beautifully as both a stand-alone story and an introduction to the pan-Asian and Asian American heroes of the Marvel Universe. This creative team has set the stage for a lot of wonderful things to come.