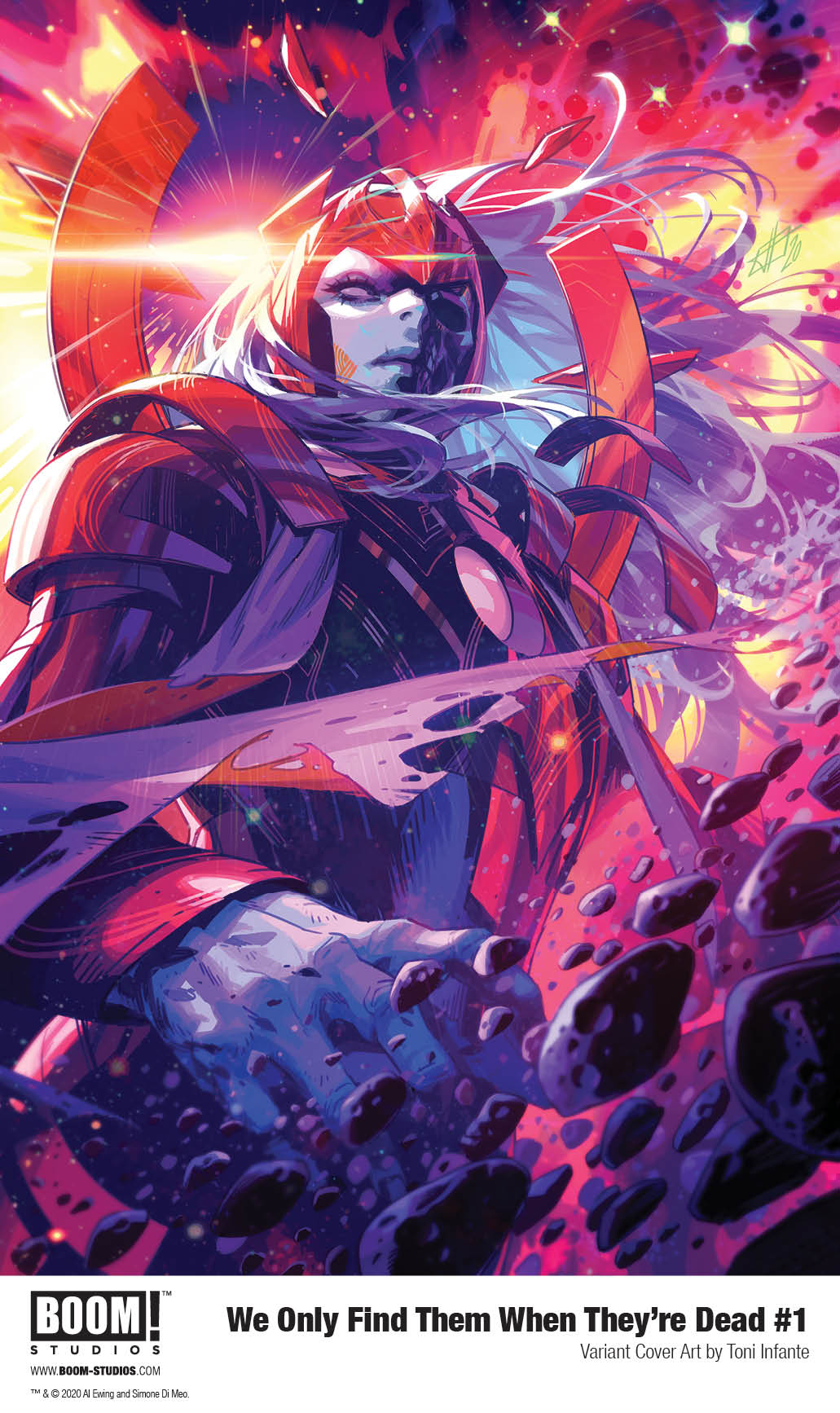 There is something truly poetic about We Only Find Them When They’re Dead. Perhaps it is the title of the comic itself that gives off this aura, a type of ominous phrase that gnaws at you as you inspect the cover. Or maybe it is the recurring refrains that litter the pages, constant echoes that emphasize particular facts. Although, probably the best answer is that Al Ewing’s is able to create a haunting story with a few simple sentences that Di Meo brings to life with a deft mastery of sci-fi aesthetics. 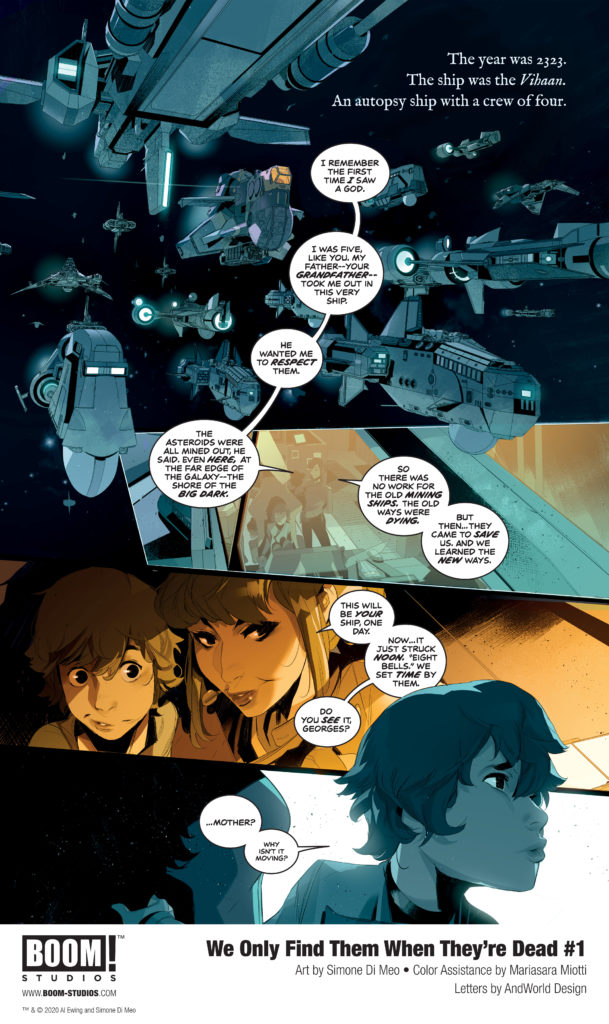 We Only Find Them When They’re Dead does not obfuscate anything about its premise. There are people in space. They are looking for a god. Gods in space are only fine dead. That’s the pitch right there and then, and as a fan of speculative, I was sold off that alone.

As far as high concept sci-fi pitches go, We Only Find Them When They’re Dead succeeds in presenting poignant prose and incredible artwork. Ewing’s writing is forward and direct that manages to articulate the action and motives of the crew at a particular juncture time while also tantalizing the reader of the grander scope of the world. The use of refrains in conjunction with the stellar lettering from AndWorld Design leaves a lasting impact and effectively establishes the baseline of the world although it takes till the end of the issue to truly anchor the direction of the series. I will add that the comic as a whole does feel a tad on the short side. 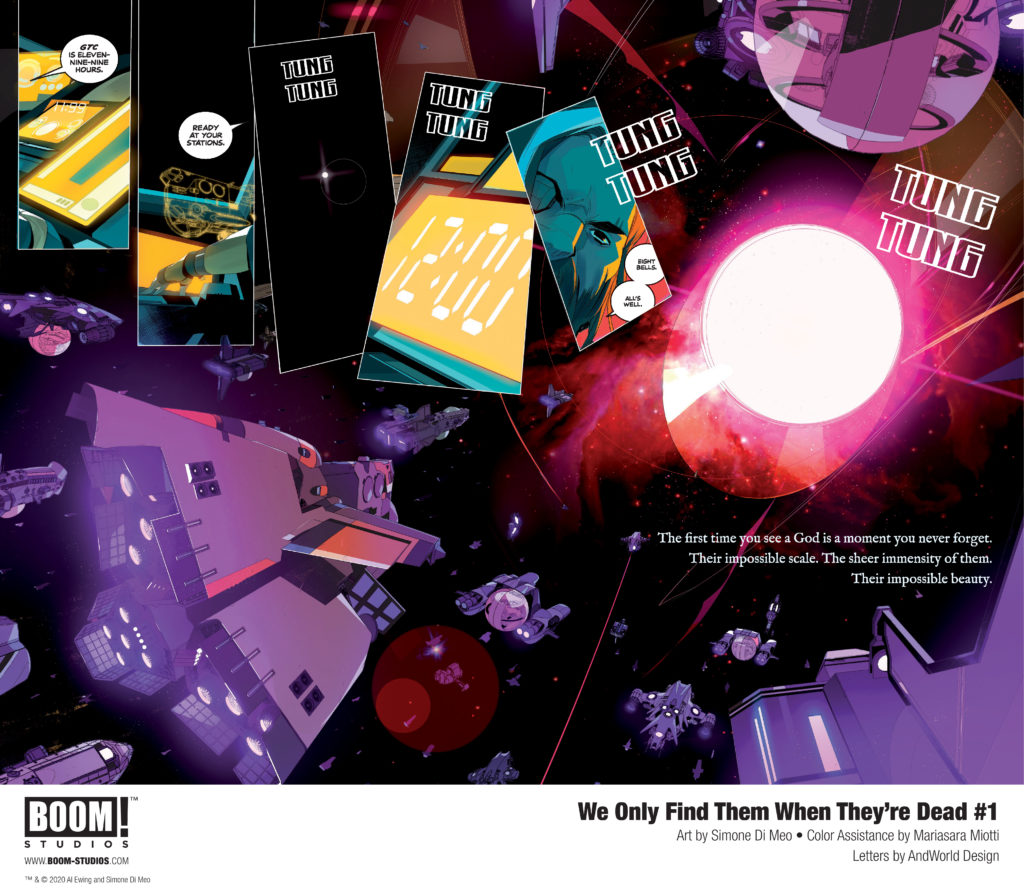 With that said, Di Meo’s artwork (with color assists from Mariasara Miotti) elevates the entire trippy experience. The beautiful technicolor and striking environmental designs are just easy to gawk at and evoke the best elements of classic space faring stories with a distinctively modern veneer. And the centerfold of the entire first issue is one of the most stunning pages of comics I wish I could share, but y’all are just gonna find it for yourself.

We Only Find Them When They’re Dead #1 comes out next week, September 2nd.