I grew up in a household that wasn’t overly religious, I don’t think. My mother was good with her god. I’d say she was the usual god fearing Christian Black woman that had to remember she was a god fearing Christian Black woman as she prevents herself from beating someone’s ass that rightfully deserves it. That contrast about her was one of the things that I loved most. What I hated most was her taking me to church on Sundays; not because I didn’t want to go but because at the time I was running track so the week was filled with practice, then a competition on Saturday and Sunday was my only day off. I once saw her step over my older brother to wake me up for church.

Me: Why doesn’t Travis have to go? He needs god way more than I do!
Mom: You need to take communion.
Me: I can get my own damn juice and crackers.

What makes that conversation worse is that same day the preacher asks all the youth to stand up then questions what each of us wanted to do for a job in life. The usual answer of fireman, dancer, and doctor were given and when he got to me he asked, “and what would you like to do.” …to which I replied, “I’d like to sit back down.” In my defense, everyone else thought it was funny. The preacher shook his head and said, “there’s a Smart Alec in every group.” My mother looked at me with that, “Really?” and shook her head, mom-ish, in that “you think you’re sooooooooo funny” body language.

I’ve always been the type of person that gets to the lesson or realization through a different route. Sometimes it takes longer, sometimes it doesn’t but it’s usually unconventional. I’m my mother’s son but my cynicism reassures me that I’m my father’s kid as well when it came to certain preaching’s in the Bible. “Wait, just for looking back she got turned into salt lick? I’m just sayin, that’s not a bit much?”

It’s funny, the universe is rarely so lazy to allow coincidences but perhaps the universe is as human as the rest of us and has off days. It just so happened I was talking to someone in my youth [the one that got away before the one that got away] where religion played a huge part of their life and at the exact same time Green Lantern [you knew the nerd shit was coming] was on fire as a comic book.

The “Sinestro Corps War” ended and we were making our way to “The Blackest Night” story line. New lanterns controlling various emotions were appearing and we then became introduced to the first recruit of the Blue Lanterns, Saint Walker. As a Blue Lantern Saint Walker’s greatest power was his faith, which in turn charged his ring with hope. Hope gave’em the ability to charge Green Lantern’s ring over the normal capacity. Showing how intertwined faith and willpower were in co-existing with one another. 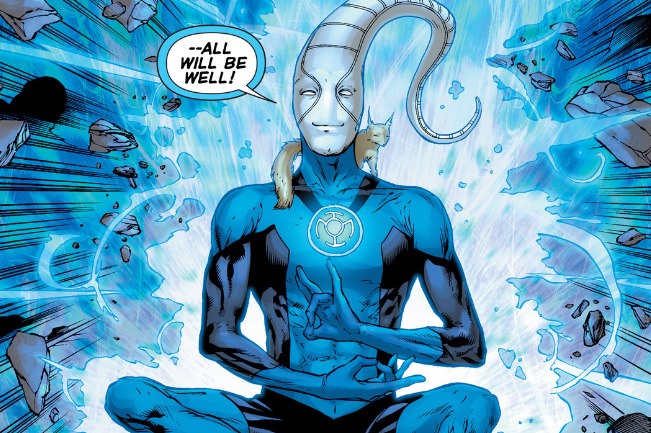 It’s not every day that a comic book or any source of media can speak directly to what you’re going through or move you to wanting to learn about other spaces outside of your comfort zone or perspective. Geoff Johns and Ivan Reis work on Green Lantern did just that for me.The realest shit came upon discovering the origin of Saint Walker or rather Bro’Dee Walker as he was previously known. Walker was from a planet that was in turmoil due to their sun being on the verge of dying and about to explode.

Walker was trying to calm people down in the midst of their panic and rioting with scriptures from their of their faith but they weren’t hearing him. The scriptures talked of the messiah that was on top of this mountain. No one was hearing Saint Walker so he decides to go and find the messiah for himself. He takes his family on a trip through the mountain to find the messiah and tragedy strikes Walker’s family along the way, he loses his father, wife, daughter and lastly his son. All of them never losing faith that “All will be well”. Walker gets to the top of the mountain and sees no messiah just a tall slab of rock.

Homie, flips his shit and rightfully fucking so. Walker took this journey to seek this greater being he was living life by, abiding by this faith as law, and all in seeking out this messiah in the planet’s greatest time of need, there’s nothing. I never understand the whole having to hit the lowest of all lows before the message gets blessed upon you (I mean I get it but again..a bit excessive no?) but I do love the climb back up from all that empty. That being said, the following scene to me is one of the most chillingly beautiful panels in comic book history. 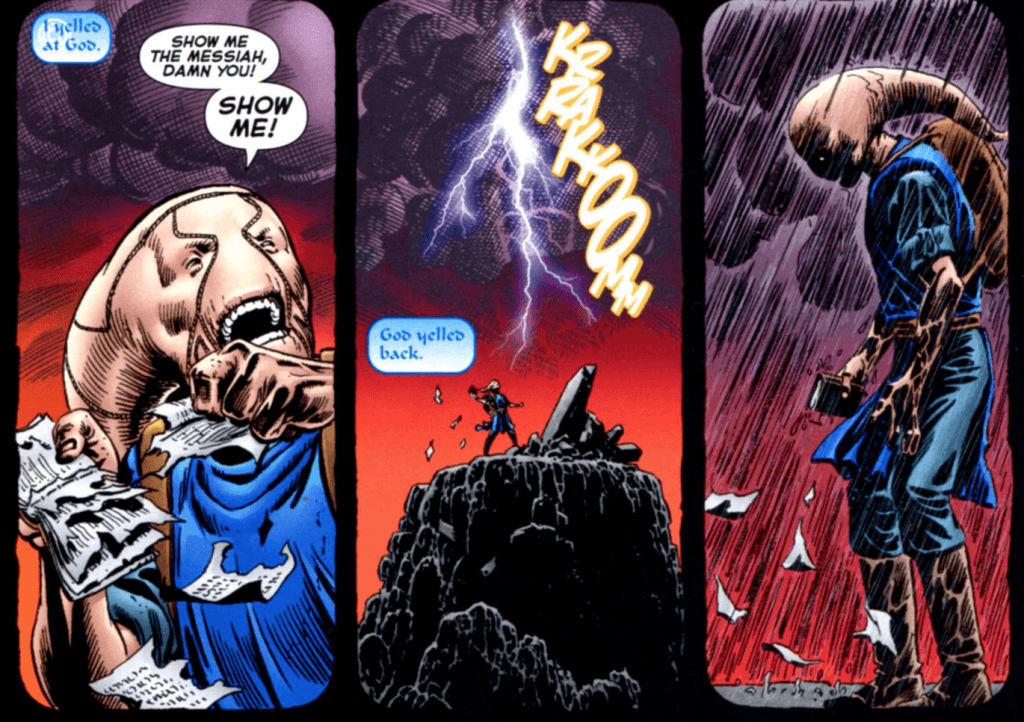 “I yelled at god… and god yelled back.” That phrase was etched into my memory. When Walker sees his reflection and understands that the messiah wasn’t going to come down and deliver the answers unto him but instead create the answer by working through him? Bars. Walker goes down and talks to his people again until one person listens, and then another and so on and so on. Through their combined hope their planet’s sun goes from dying star to becoming a young blue sun. A Blue Lantern ring then appears and selects Bro’dee to become its first member. (That phrase from “Blackest night: Tales of The Corps #1” gave me the underlying lesson that church was trying to get across.)

I remember trying to find that issue everywhere and I gave it as a gift to the love interest of this story I’m recounting. I remember bothering them about it to see if they had read it yet, over and over. Nicole Homer has a great quote about nerd boys being like cats. They’ll leave this thing they created or found at your feet like a dead mouse and say “Here. I got this for you.” I don’t remember if they read it or not, I’m pretty sure they didn’t but this was years ago and memory tends to be something you can bend to fit your own narrative when the years have been long enough. If they did or didn’t doesn’t really matter, the story I’m telling isn’t about the girl…not that one at least. 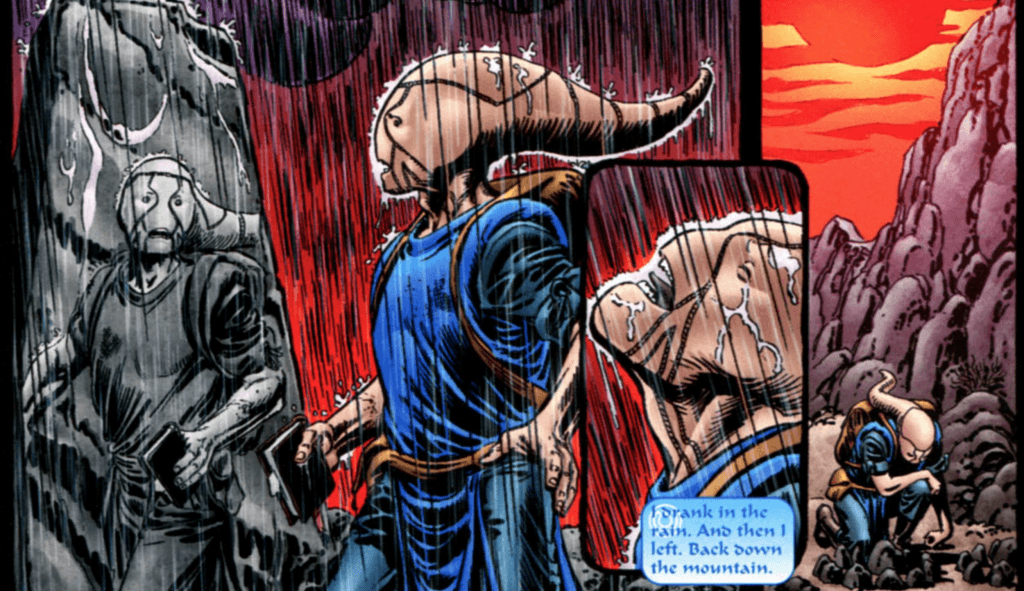 This is about my mother, how her absence is a memory that refuses to change to fit my narrative. In “Secret Origins,” Hal Jordan watches the jet his father was testing crash and says, “When your worst fear happens in front of your eyes, I thought there was nothing left to be afraid of.” I wrote this on a bus back home after going out of town for my birthday to do a show. I’m not a fan of my birthday as it’s a huge reminder that my mother isn’t here. I know that’s probably selfish to say aloud especially when others are around to let you know how much of an impact your birth has had upon their lives, but its the truth of the matter. I can’t end this article with a metaphor of how everything will be alright when for me this feeling won’t end with any punctuation. God has a plan may be the right thing to believe right now but I don’t give a fuck about God’s plan.

I want the woman that gave me the deed to my life back. I want the woman that would get excited for my birthday for me back. I spend 364 days of my life trying to be as selfless as possible, as she raised me to be, as if it earns me the right to say that out loud without feeling guilty. It doesn’t. Loss is a hearse full of hurt that will make you a different shade of human. A perfect storm that’s so much bigger than you care to admit. 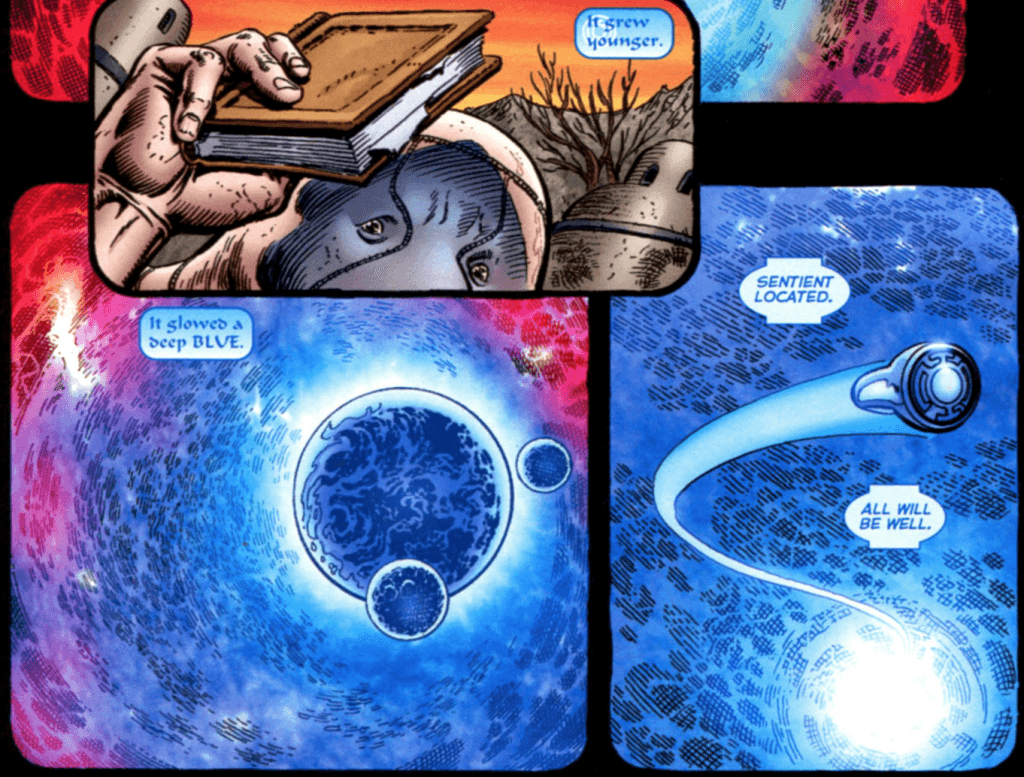 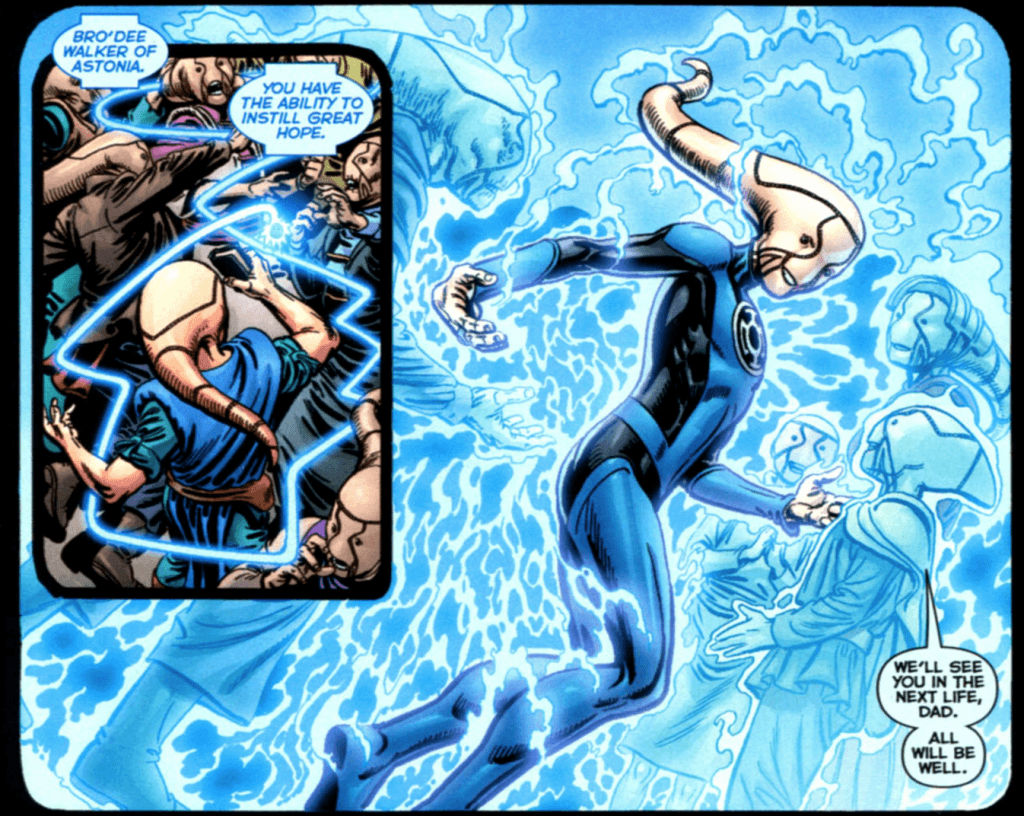 While most people go to Bible scriptures when they need to find strength, I always go back to certain panels in comic books. Maybe that’s not supposed to be the way it works but I don’t care. I went back to that issue of Green Lantern and I remember when she died. I remember how I yelled at god and still haven’t heard anything back.