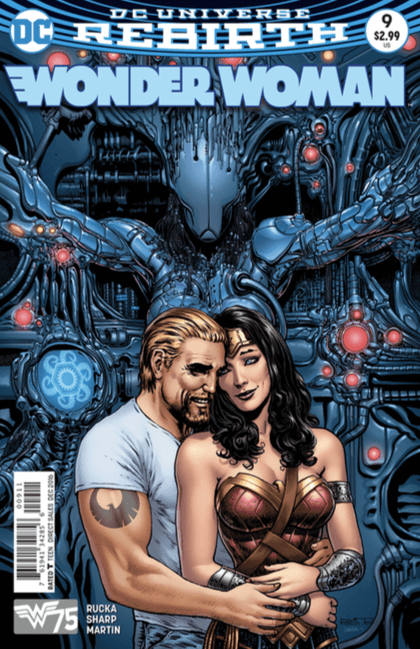 Welcome to the Shippy Issue.

Now, I should probably be clear here: I tend to cringe automatically when people start shipping Wonder Woman. I’ll admit that I say this as someone who 99% of the time when consuming any kind of media compulsively ships characters together with a quickness, but I’ve rarely seen anyone pull off romance well with Diana without having to reduce one of her key personality traits in order to fit the couple’s dynamic. Too often Wonder Woman’s first love, her love of all humanity and living creatures, takes an uncharacteristic backseat to attending to her lover as she flirts seductively or is overcome with girlish naïveté. I mean look, I don’t always make the best decisions when I’ve been hit by Cupid’s arrow, but that doesn’t mean I want my heroes to act that way. So while Rucka’s writing is still as sharp as ever (and Sharp’s art as stunning as ever), this issue left me a bit torn. Is Rucka able to pull off the fated not-quite-friends, not-quite-lovers bit with Steve with a nod to some uncomfortable history? Of course he is, but Great Hera does it feel a bit awkward to flip through. 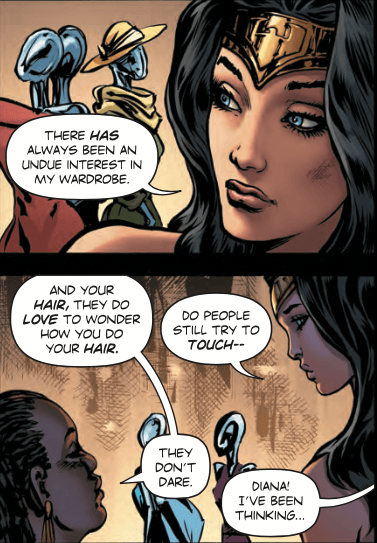 I’ve mentioned previously that I’m not a fan of Steve Trevor so even though this particular incarnation remains one of the best of the bunch I still think the area where Rucka continues to shine brightest is when women are the main spotlight. For instance, there’s an absolutely lovely scene towards the beginning of the issue where Diana, Etta, and Barbara Ann all get to reminisce and exchange witty quips with one another in a way we rarely get to see such important women characters relax outside of say, comics that emphasize all-women team ups. Just as I adored the previous story highlighting Barbara Ann’s tragic maturity into her current form, I could equally devour a whole plot focused exclusively on these three thoroughly conquering any obstacles thrown at them. But alas, as our cover demonstrates, the heart of this Wonder Woman unfortunately lies elsewhere.

This issue’s real attractions are in the details: colorist Laura Martin particularly takes the cake with a gorgeous sunset scene and full use of a rich palette of colors. Knowing the brilliance of this crew I wouldn’t be surprised if the visual parallels between this issue and the first aren’t intentionally evoked. There’s even a clever Easter egg fans of other comic creators will recognize immediately as an homage. Sharp also draws a rather bewitching civilian Diana complete with lustrous wind-blown hair worthy of the most expensive shampoo commercial and poses that successfully convey vulnerability and tenderness without erasing her strength. And, though I will continue to dislike any Wonder Woman romantic encounters, my favorite gem of this comic are these two panels: 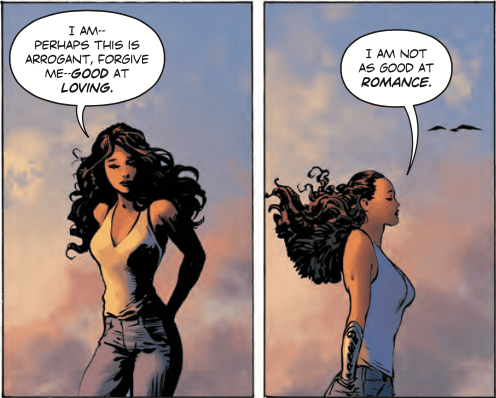 Yes! In just a few words Rucka illuminates the essence of Wonder Woman that I believe many writers struggle to balance with her. I only wish this issue had come out last week in time for our staff celebration of best Wonder Woman moments.