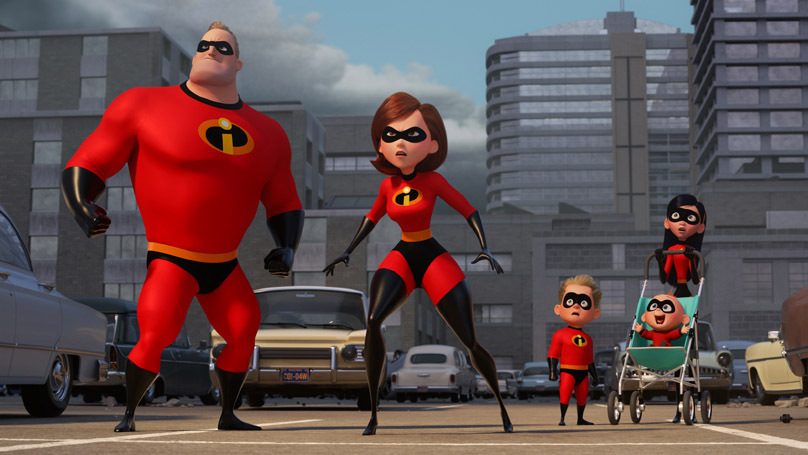 Finally, after 14 years we finally get the sequel we’ve been waiting for: Incredibles 2. Was it worth waiting until the first movie’s 8th-grade graduation to drop the response track? I’mma answer that with a GIF.

Incredibles 2 is a ridiculously fun night at the movies for all ages. My Thursday night showing was packed full of families with young kids, crews of high school students, and adults rolling solo-dolo. No one wanted to miss this and our dedication paid off.

The sequel picks up right where the original left off, like literally after the last frame of the first movie. The Parr family takes on The Underminer (brilliant supervillain name, I crack up every time I think about it), a task that ends up being much harder than they anticipated. And that’s just the beginning.

The whole crew is together again for this one. Bob’s hero skills take a backseat in this sequel which only gives the rest of our supers the chance to shine. Frozone continues to be the 2nd most bawse ice wielder in fiction (and if he manages to make a sentient snowman, he’s jumping to 1st. IDC. IDC.) and honestly the best bff-slash-wingman in film. Dash and Violet get some fantastic sibling banter and Violet flexes her powers enough to let us know she’s finna whip some villain patootie when she gets older. That girl is ridiculously strong. And Jack-Jack. Oh, Jack-Jack. Jack-Jack MAKES this movie as only an over-powered, barely verbal toddler could. Not only is it non-stop laughs when he’s onscreen, he has THE BEST fight in a movie full of great fights. I lie to you not, it’s wild.

If Incredibles belonged to Mr. Incredible, Incredibles 2 belongs to Elastigirl. The first movie gave us Bob’s journey from superstar superhero to desk jockey back to superhero. His story reached all of us who feel undervalued and underappreciated working a 9 – 5 gig we hate just to pay the bills. But we never got Helen’s side of the story. Another super celebrity forced into hiding when superheroes were outlawed. How did Elastigirl feel about giving up that part of herself?

Incredibles 2 not only gives us answers to that question, it gives us a glimpse of the Helen who scoffed when an interviewer asked if she wanted to settle down. We knew she wasn’t gone but this time we really see her shine. Elastigirl let loose on her own is a brilliant tactician and fighter and watching her work is glorious. Meanwhile, Bob struggles to take over her responsibilities at home and we’re shown exactly how much effort homemaking takes and why it needs to be considered a full-time job. 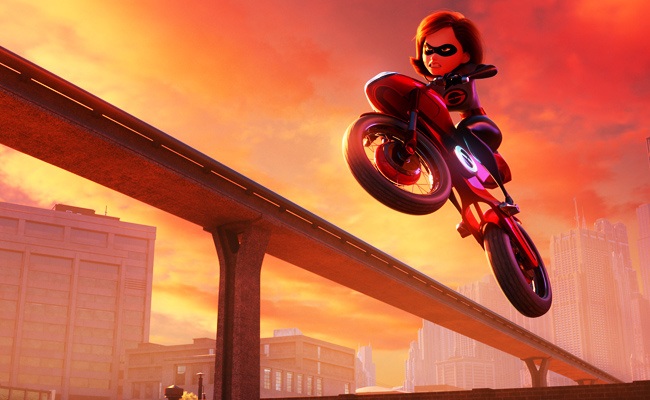 Although this is a kids’ movie, there’s plenty to keep adults entertained. It’s perfectly balanced in that way Pixar seems to have mastered. We also get thrown some pretty serious questions. Do you have to sacrifice your passions for motherhood or vice versa? How do different people deal with grief? Do the things and people that make our lives easier also help make us soft? What does it mean to see positive representations of someone like you in the media? Is the family balance upset when the woman is the more successful one?

The last two questions are the ones I feel don’t get the most honest answers. These are my only two gripes with the film. We’re shown how important representation can be to one person who feels like an outcast but still get no Black women with both screen time AND lines. We also see that Bob is obviously jealous of Helen being the focus this time around and it never gets talked about. Even Helen notices but magnanimously never calls him out on it. Might be a nitpick but THAT is definitely a conversation we need to have and they handled it like Peyton Manning at Super Bowl XLVIII.

The ultimate verdict is GO SEE INCREDIBLES 2! It was totally worth the 14-year wait and I’m so glad it’s here now. Take some nerdlings. Go sans kids. Get a group of your grown friends together. Take yourself out on a date. Doesn’t matter how you get there, just go!