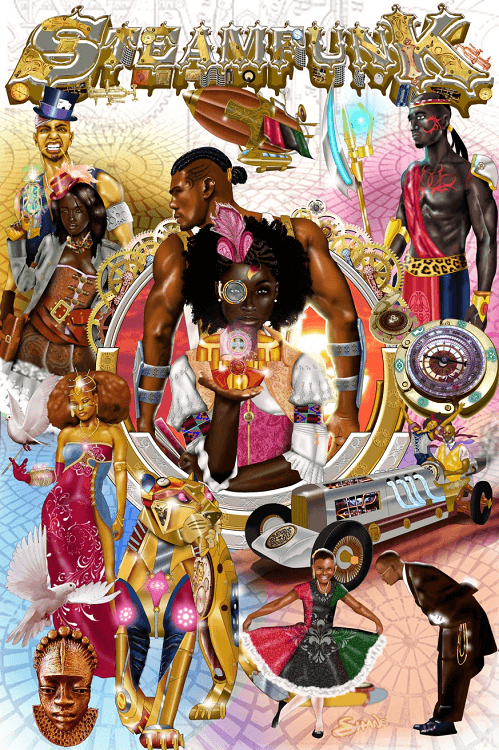 As I mentioned in my intro (you did read the intro, didn’t you?), I’ve got a crush on Afrofuturism, a mash-up of the 70s black power and space age aesthetics with any other futuristic, science fiction approach you can think of. So for my first review I picked a short story anthology that purposefully sets itself in that matrix, taking the current craze of Steampunk, with its dirigibles, steam-powered men, and corsets, and making it funky. That anthology is Steamfunk!, edited by Milton Davis and Balogun Ojatede. The anthology has 15 short stories in it of widely varying lengths, styles, and levels of quality. I can’t do them all justice, so I’m going to roughly group the stories into 3 categories.

Category 1: Shaft on a steamtrain with Coffy as the engineer, conductor, and porter. Some of the shorts in this anthology were exactly what I’d thought they’d be – a different take on all things Steampunk. Heroes and heroines save all-Black towns with steam-powered robots; they defend imagined black countries with dirigibles and mag guns; they fight mechanized Tsavo lions with a Masai spear in one hand and a flintlock pistol in the other; and they punch a lot of old, white men who are wearing re-designed Confederate States of America uniforms. If a black male spy working undercover on a plantation who drop-kicks the overseer (or ob’erseer, depending on how much dialect the author was into), then leads all the other slaves to the promised land currently ruled by President Frederick Douglass is your ideal man, there are stories in here that will make you jump up with your fist raised high. My two favorites in this category were Men in Black by P. Djeli Clark and The Lion Hunters by Josh Reynolds. These stories were entertaining and tightly written. They took themselves seriously without being preachy and they delivered on the promise of a new world gone Black. These are authors I’ll try to look into for future reviews.

Now some of these stories are just not-quite-done-yet. These stories have great ideas, but they need refinement and editing to come to fruition. Depending on your personality, reading these will either inspire you with what could have been or make you scream at what just isn’t. One of my favorite half-baked stories revolves around a shape-shifting daughter of Anansi, who turns into a spider at night and defends the poor and defenseless from the rooftops like some kind of actual Spiderwoman. And she eats the bad guys. Awesome. Except the story is too long, the build-up useless, and the payoff ungratifying. In another story, a hooker with two mechanical legs becomes a nun, only to find that she has to use her martial arts prowess to protect her sister nuns from a nameless lake-dwelling evil. How did the hooker get martial arts prowess? Who can say. Where do the nuns get the guns they use? I don’t know. A great idea – nuns and a nameless evil are kind of made for each other – spoiled by poor execution. These authors just need a little more practice and feedback and they’ll be writing great speculative fiction. Until then, I’ll pass.

I’m a critic. That makes me, by definition, a critical person. And when it comes to books, I’m more critical than many. Lots of things bug me that other folks don’t even notice. I get that. I’m telling you this because there are some shorts in this anthology that didn’t just bug me, but that made me turn off my Kindle in disgust. And I feel bad about that – about hating something I really wanted to love – and I feel angry about that too – about buying a book with such promise only to be rolled.

One of the stories in the anthology was so riddled with the worst kind of stereotypes of Black men that I couldn’t finish it. Maybe the author was going for irony; maybe he thought he was being funny. Either way, when your male characters spout every cliché short of “Where the white women at?” you’ve got a problem. In another story, I’m sure the author was going for a women’s empowerment thing. The main character is the dean of a women’s college and the entire plot unfolds from her point of view. As the story develops, you discover that this “powerful” Black woman actually has no effect on the plot: she does nothing, stops nothing, and changes nothing. In the closing scenes, she is imprisoned by an impossibly attractive Black male technomage (is there any other kind?). She can hear him raping her student in the cage next door and she says: “I have never before been glad to have been born ugly.” That’s when I said, outloud “What the actual f**k?!?” and flipped to FB, where there was less sexist sh*t going on that day. If she’d been born beautiful, and been the target of this sexual violence, she’d have been okay? Should the other woman grin and bear it because he’s good looking and she’s good looking and that’s just the way it goes down sometimes? Are impossibly attractive Black male technomages simply above reproach? Yeah, sister’s got issues, and I’m not talking about the kind that Oz and Will review. Needless to say, I can’t recommend any of these authors, not even as examples of things to avoid. I’d like these stories to fade into anonymity, never to be read again.

Overall, Steamfunk! is a real mixed bag. Some of it was really entertaining. Some of it should be erased from history with a chisel and meaningful intent. Would I recommend buying it? Sure. If you’re interested in something new, finding some new favorites, or just dipping your toes into one expression of African American science fiction. For my part, it’ll took me a few days to get over my mad-face, but I don’t regret reading it. The parts I liked, I really liked and supporting new authors is worth a lot to me.

My next book will be: Mothership: Tales from Afrofuturism and Beyond. You can read my review here in about a month. There may be way less Shaft. I may be able to work in a Soul Train reference. We’ll see.

If you have any other authors, anthologies, or avenues you’d like me to explore, I’m open to suggestions. I’ve got the next 6 books planned, but I’m always looking for more things to put on my Wish List. Put your suggestions in the comments below. Thanks Blerds!