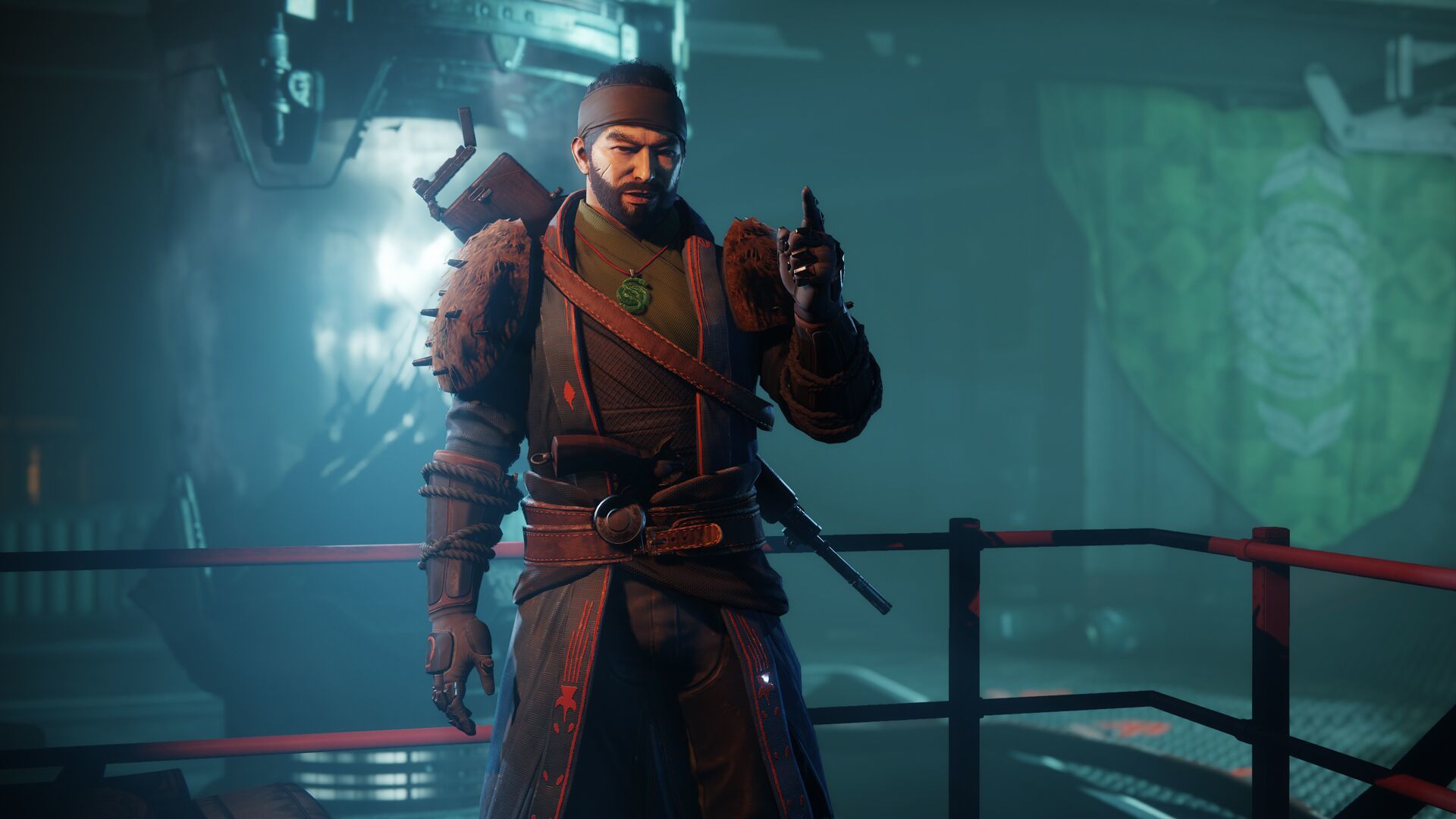 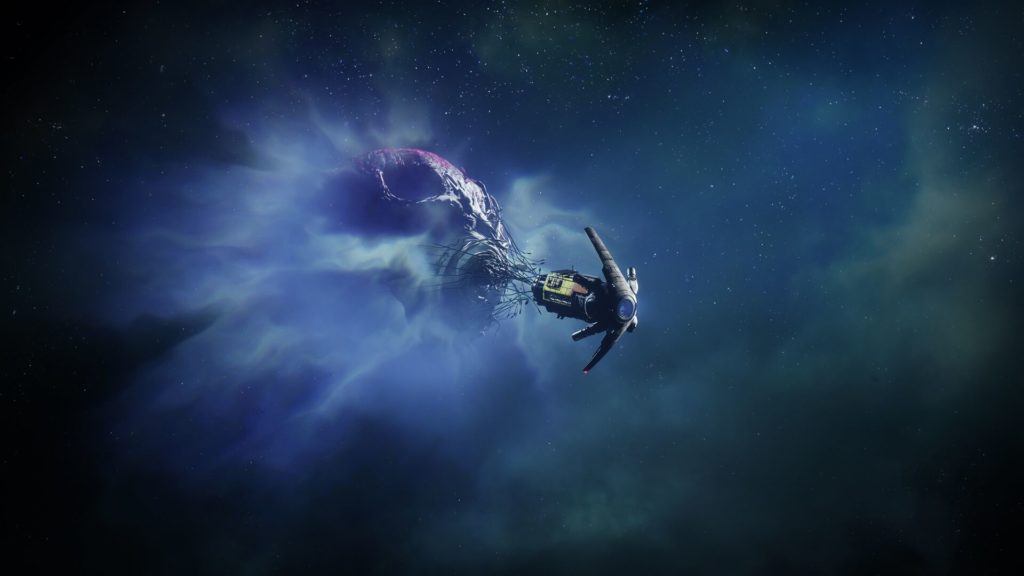 My man waltzed up to the Tower on a small freighter ship carrying a chunk of ice and set up shop in a back alley and started flipping jade coins. And you know what? We flocked to him in droves. We willingly flew to his ship and were told: “Kill every enemy of humanity and then kill your fellow Guardian and you’ll get paid,” and listen, we chose to get paid. Or at least almost 75% of us decided to buck the Vanguard for a character we’d known for months.

Dude jury-rigged something straight out of a mad scientist’s laboratory, put these “banks” in various location as beacons to all of our foes, and called it a game. Called it research to see how we’d handle the dark. And we went willingly and happily because my man was upfront about his whole operation even if we knew it would have consequences. 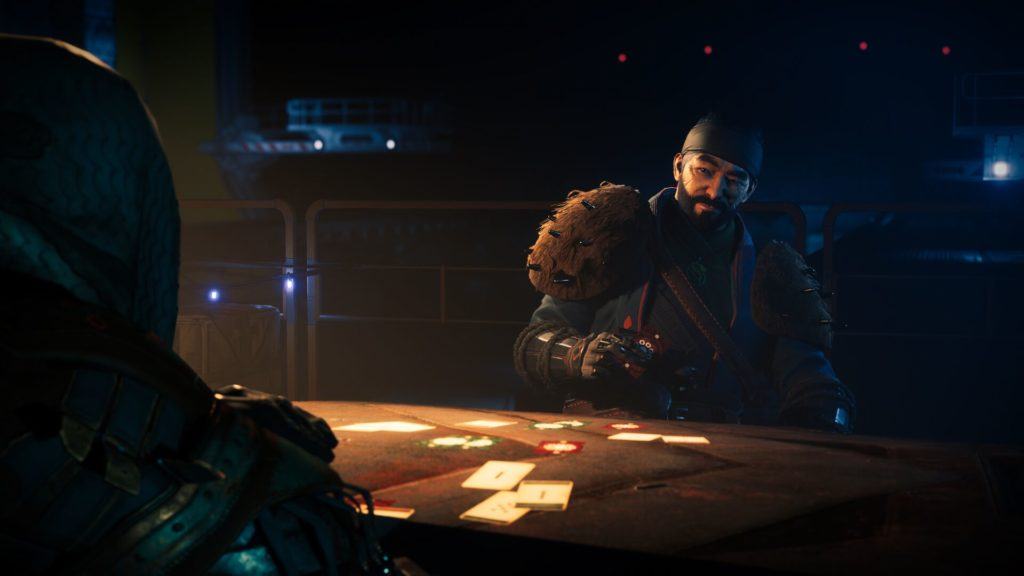 As his season winds down, let me pay respects to the man who started out with no name, before taking up Wu Ming and Eli and Dredgen Hope, before he took the moniker that we know him by: DRIFTER, and why he’s on my Top 5, dead or alive.

All the Drifter ever asked us, was if we wanted to a play a little game he liked to call Gambit. And Gambit was a godsend for Guardians. Two fire teams of four tasked with killing Cabal, Vex, Hive, Fallen, and Scorn to summon a Primeval, with the added twist of being able to disrupt progress by embracing the dark and taking an invasion portal to the other side to wreak a little havoc. This brought the strikers and raiders together with those who spent hours in the Crucible. This was a unified sandbox where all sorts of Guardians got a chance to show off their skills.

And he made sure we got paid…

2) I’m lookin’ into space like, “Is anybody there?
And if aliens are here, please tell me how near.
Do you come in peace or should everybody fear?
I’ll wait your reply with a blunt and a beer.”

Now, Guardians like armor, but they love their guns, and the Drifter is the Dark Age arms dealers. His armory is stocked to the brim with some of the best firearms around. The Drifter rose up during the age of Warlords, and his wares are simple but get the job done.

The first wave he shared with us: Bad Omens, the definitive cluster bomb rocket launcher. Bygones, one of the banes of the Crucible. Trust, a well-rounded hand cannon.

And then he started sharing the really good stuff. Breakneck, one of the most devastating primary weapons in the Destiny Universe. 21% Delirium, the first rapid-frame machine gun that just hoses bullets.

Spare Rations, an upgraded version of the fan favorite Midnight Coup if you’re lucky. And Arbalest, a kinetic linear fusion rifle a.k.a. Railgun that defies all sorts of physics. Not sure how Eva Levante got a hold of that last one, but the point stands, the Drifter has that good loot, and you can’t deny that.

So, we talked about the Drifter’s game and the Drifter’s gear, so it’s we acknowledge the Drifter’s con. Dude is clearly on the wrong side of right, and the right side of wrong: running Gambit in the background. Vanguard gave him a spot in the Annex, Shaxx lends his Redjacks to clear the arena, and the Hidden Aunor is not happy that a rogue light-bearer was summoned and is now somehow creating them with the power of a mysterious gift from the Emissary of the Nine.

Yet despite knowing all of this, we still engage with him, and it’s because he’s charismatic and maybe a little right where he says that the Light isn’t enough for what extinction level event is coming up next. It’s the way he calls us brother and sister, and we transmat down onto the battlefield. It’s the cute coin tricks with the crooked smile. It’s the swagger of someone who’s seen some shit and wants to make sure that he lives through more. You gotta respect the hustle if nothing else.

4) The gift of freedom wrapped in days of rapping to himself
Until his vocal cords collapse, he’s in the galley screaming
He shouts at the dark, stands back
counting the seconds before his voice returns…

Like all Risen, the Drifter didn’t start out as the Drifter. He started out nameless, resurrected by a Ghost that rammed through the skull of another human. Kept dying from starvation only to be resurrected with a gnawing hunger in his stomach. Adopted the moniker Wu Ming, literally meaning “Nameless” back in the Dark Ages when Warlords ruled with their new-found power. Eventually found a village only to see it burned to the ground and went to Lord Felwinter and asked for vengeance.

Disappeared for a bit before running with the Dregdens of Yor in order to survive and picked up enough tricks to help the Guardians recreate a functional version of Thorn. Got sent to an icy planet where he saw shadows monsters nullify light and watch his fireteam succumb to madness. And the Drifter wasn’t immune to this. The whispers of pyramid ships whisper slowly working their way towards Earth, a great darkness to consume the light. Constant taunting from the visage of the woman he loved or loved as much as a vagabond could.

Through the Invitations of the Nine, we learned about a time where Drifter went by Eli. Became friends with an Awoken Pilgrim Guard called Orin, one of Queen Mara’s trusted friends. Orin would eventually become unsatisfied with her Light knowing that the sentient gaiaforms that were the Nine were out there with more answers about the universe.

“She was a snake,” the Drifter claims. He’s still haunted by her tattoo which he uses as the insignia for Gambit. He still remembers their first dance and their friendship, only to never see her again… at least not as she was. There is tragedy to the Drifter. Everything “all right, all right, all right” masking a fear of eventual doom and the memory of the past. He’s haunted by it, driven by it.

We’ve known the Drifter for less than a year, but every Guardian has felt his presence change the universe. And as a Dredgen and proud Invader myself, it’s easy for me to add the Drifter to my Top 5, (un)dead or alive.

Read some of our other BNP staff Top 5 Dead or Alive here.

Where are our POC gamers that are excited for #Destiny2 Season of Opulence dropping on Tuesday? The BNP crew will be streaming from reset to Raid on June 4th. You can remedy that with the Black Nerd Problems crew. Hit us in the DMs! https://t.co/NbFmiTxRHr pic.twitter.com/UWUyvSnGdq