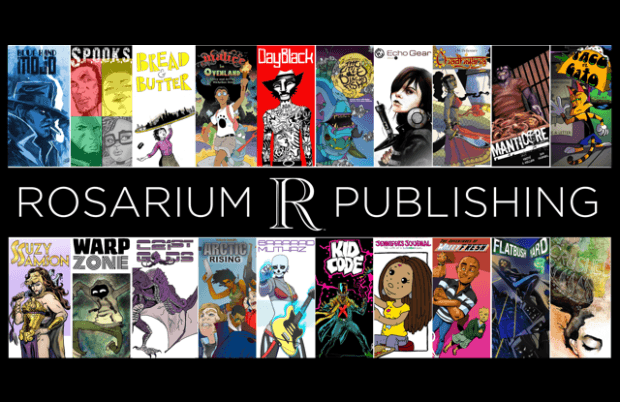 As you know, competition for your reading dollar is rough. There’s big publishing houses filling up brick and mortar stores with the mainstream, there’s digital 99-cent throw-away e-books (don’t get me wrong, I love some 99-cent e-books), and in the middle there are small publishers like Rosarium Publishing. When you’re in the middle, it can be hard to grow beyond the original dream, to collect enough cash to build something sustainable and forward-looking. With that in mind, Rosarium has launched their first crowdfunding campaign at Indiegogo.com. The primary goal of the campaign is to raise enough seed money to move the publisher out of the “print on demand” model, which is easier for a smaller house to manage but is very expensive over the long run, and onto a more-traditional printing model, which requires up-front money but allows for more growth over time.

You might not know it, but you’ve heard of Rosarium Publishing before, especially if you’ve read my book reviews. I’ve recommended two of their past anthologies — Mothership: Tales from Afrofuturism and Beyond and Stories for Chip: A Tribute to Samuel R. Delany. I’ve have heard nothing but good things about their latest work, The Sea is Ours: Tales of Steampunk Southeast Asia, which is pushing its way onto my summer reading list.

Led by Bill Campbell, Rosarium has grown as one of the leading publishers of speculative fiction and comics from a diverse base of authors and artists. People like Maurice Broaddus (The Voices of Martyrs), Jaymee Goh (The Sea is Ours), and JM DeSantis (Chadhiyana) have worked with Rosarium, building a strong inclusive base of talent. I had the pleasure of meeting Bill Campbell back in January and his dedication to opening the world of publishing up to more people is unmatched. The strides he and his team could make with our support would be epic.

We’ve shared some great crowdfunded projects here at Black Nerd Problems: EXO: The Legend of Wale Williams and Black to name a few. Like those comics, the Rosarium Publishing campaign that needs the love and support of the reading community to keep moving forward. You can learn more about the campaign, and back the drive at Indiegogo.com: Rosarium Publishing: The Next Level. You can also follow them on Twitter (@RosariumPub) and Facebook.

Help them answer the big question: What if everyone got to tell their own story?