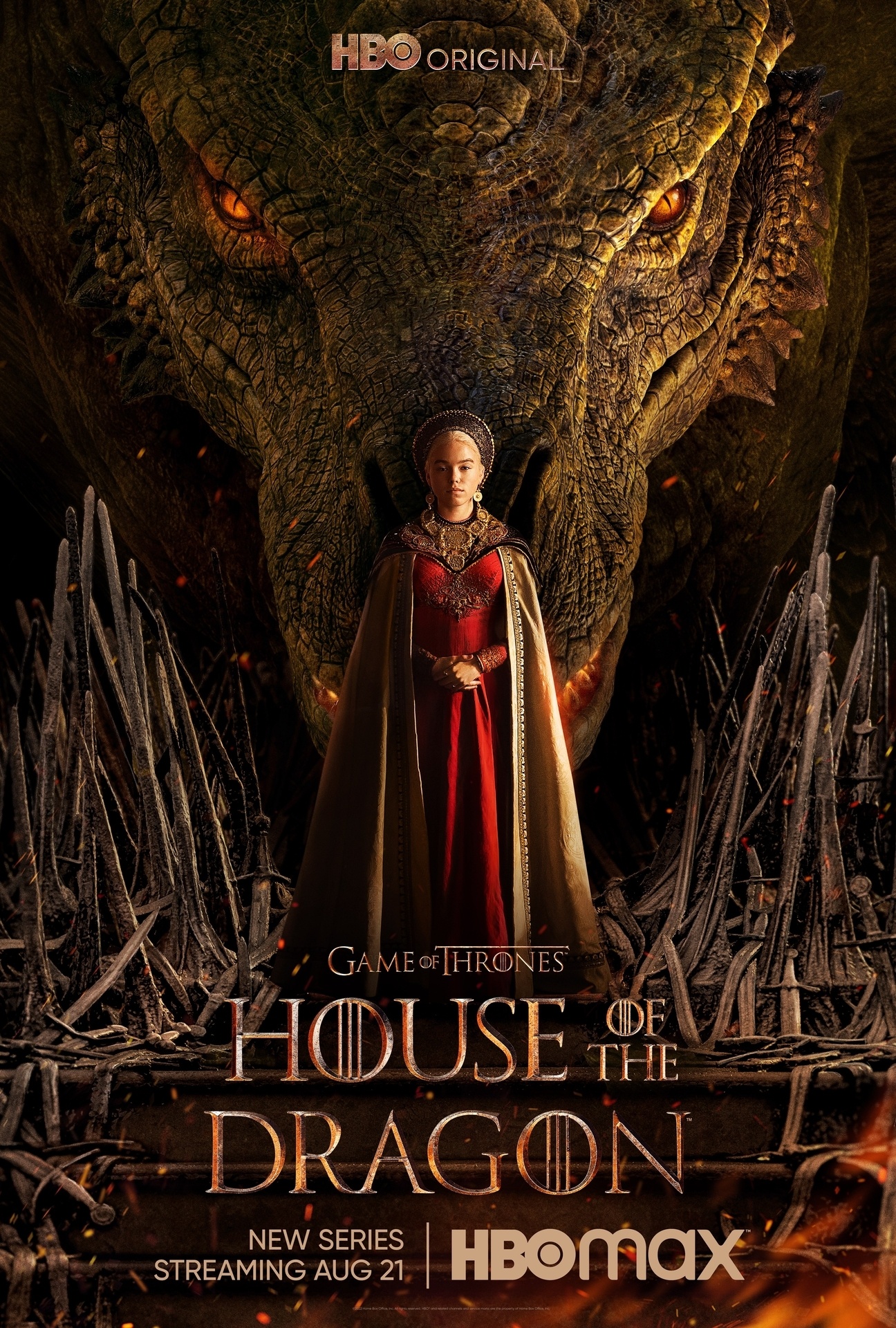 Do thine eyes deceive thee? Is that a black Targaryen in the midst?! Did I just see Khaleesi hop off the back of a yellow dragon?! Death to the patriarchy?! Mannnn, we got a lot of House of Dragon details to unpack and explain, in only the way BNP can, so pull your fitted down low, buckle up, and get ready to enjoy the ride.

But Before We Begin…

I need to salute Black Nerd Problems EIC, William Evans, for putting in work while reviewing and recapping this fantasy epic that we all learned to love and critique for so many years. Just as Jordan and Kobe passed the baton, I’ll be doing my best Ja Morant impersonation. Just know that I’m coming live from the Thrones gutter aka a hardcore Game of Thrones /Song of Ice and Fire, fan perspective. I was in the season 6, 7, and 8 trenches appreciating every great moment despite the sus writing and Flash level pacing.

Dedicated Thrones fans were going through it, but I found solace digging into the lore, the history and all of the incredible characters that came with new stories like A Knight of the Seven Kingdoms aka The Hedge Knight aka Dunk and Egg. You’ll find some great little tidbits of info related to this show in The World of Ice and Fire coffee table book, which has conveniently been dusted off and made its home in my living room all week. House of the Dragon is largely based on the new book Fire and Blood… or The Princess and the Queen, or, The Blacks and The Greens (if you nasty), which was a PDF I downloaded back in 2016 and have passed along to my friends who were feeling content starved. Now, I’m ready to enjoy this show’s adaptation and expansion of that story, while also being critical of its shortcomings. Alright fam, now that that’s out the way, let’s get it (G. Dep voice)!

Off the rip, they’re setting the tone of disrespect and brewing vengeance. The Great Council at Harrenhal was needed to decide if the patriarchy would persist, or if they’d pass the rock crown to Rhaenys which was hers by birthright, being the eldest born grandchild of King Jaehaerys (his sons died or abdicated the throne). While that decision was being passed down, I’m looking around Harrenhal with *teary anime eyes* of joy because the castle is finally given the outrageous size dimensions it deserves. Anddd as expected, the misogyny runs deep, and Viserys is chosen to become the 5th Targaryen king of the Seven Kingdoms. Rhaenys, her husband Lord Corlys Valaryon, and their would’ve-been-heirs are left to wonder what could’ve been. What’s worse is this little WoIaF excerpt below…

From the History of Archmaester Gyldayn: In the eyes of many, the Great Council of 101 AC thereby established an iron precedent on matters of succession: regardless of seniority, the Iron Throne of Westeros could not pass to a woman, nor through a woman to her male descendants.

Meet the New Players in this Game of Thrones

In the present day, it’s King Viserys’ daughter Rhaenyra, who’s giving us life through her ferocious little attitude and overall composure alongside men that have 40 years on her. She comes flying on the back of her yellow Power Ranger pterodactyl golden dragon Syrax looking poised and magnificent. Then, through Rhaenyra’s eyes we get a look at how the game done changed. Dragon handlers shouting High Valyrian commands like Dominicans talking at 2am in the Heights. Dragon skulls, statues, and banners are plastered all over King’s Landing worse than teenagers wearing cheap cologne at the mall on Friday night. You will be reminded over and over that Targaryen kings and dragon power are all this land has known since Aegon’s conquest, and they will do whatever is needed to keep that power intact. Unless, the Targaryon’s burn their own house down, that is…

Then, we get a sense of what Rhaenyra’s vibe is as she kicks it with her day-1 homie, Alicent Hightower, all around the castle. They pull up on her mom dukes lookin bout 39 weeks pregnant and with shades of Arya Stark in her voice, says she’d rather ride into battle as a knight than serve the realm by giving birth to some heir. Momma Aemma clapped back at that potent 1 liner with venom of her own when she said, “childbed is our battlefield,” and I had to let out a Rick Flair WOOOO after that one! Rhaenyra and Alicent’s time together reveals their genuine companionship despite their glaring differences. Alicent, is the dutiful lord’s daughter and Rhaenyra, the lively Dragonrider. I can’t wait to see how juicy this gets.

By most accounts King Viserys is a good king, a just ruler, and worthy choice for the Iron Throne. By the realest accounts, he’s a weak, insecure, pushover who’s only in power because he was born with a phallic member and Rhaenys did not. His insecurities are on full display, albeit for good reason, as he clings to the idea that the baby in the Queen’s belly is a boy. Ya boy was lookin shaky like a rookie corner lined up against DeVante Adams on the first snap of the season.

What’s a mob to a king? Viserys don’t care that the tournament is gonna happen before the child’s born, he up in the club making guarantees like Joe Namath! Later in the episode, did you peep the way Otto Hightower, Hand of the King, interrupts and belittles him by answering Daemon? I mean, I get it because that dog has been given wayyyy too long of a leash, but at least Viserys is able to recover slightly by handing down the final warning and sending him to the place he hates most. At least he’s not getting sonned by his brother right? RIGHT?

This man’s introduction is as foreboding as it is badass! To sit your nary ass on the throne and mock the sibling that has served the realm well for nearly a decade? You know how sticky it get…

Sidebar: The throne itself tho!! HBO, pleaseee keep it coming with the as-close-as-possible-book-description visuals because the throne room is straight flames with the hundreds of swords melted into the ground and each other. Somehow, they found a way to get the vertical aspect of the thrones dam near right!

Daemon and Rhaenyra’s relationship is perfectly captured in this moment. They speak Valyrian to each other, flexing the blood of the dragon, then showcasing the love they have for each other when he presents her a gift in an almost sensual way. And well… We all know about the Targaryen comfortability with clappin cheeks with cousins and siblings, but I’ll leave that stone unturned for now.

Daemon’s next scenes leave the somewhat likeable side of Daemon behind and goes in on his savage characteristics. Leading the Gold Cloaks through the city, dismembering goons like black market body part suppliers and establishing “order” in the process. That’s our glimpse at the leader he styles himself as, and in the tournament his actions are met with shock and horror as we get introduced to the warrior man coward who would resort to any tactic possible to win. Except, he eventually gets humbled by Mr. Panty Dropper, the talented young upstart Criston Cole with the good joust and the thick mace!

Cole unseated the prince and had him Tony Hawk grinding his ribs into the rail. Cole world, no blanket for Daemon tonight!

The Ebony Elephant in the Room

Yes, Lord Corlys Velaryon aka The Sea Snake is Black. He’s not a Targaryen, but he is an actual Black character in the show, although he technically wasn’t Black in the book. But let’s start off with what you probably already know. The head of House Velaryon, Lord Corlys is the richest man in Westeros, with the largest navy. He’s old money that multiplied his fortune by navigating the Seven Kingdoms as a seafarer. He’s old money because House Velaryon is the only other major house to survive the doom of Valyria besides the Targs, obvi. Hence the silvery, white hair like the incestuous dragon riders we all love. But he cocoa butter black and aint nothing a fanboy, racist, or purist can do about it!

Anywaysss, he’s a bag chasing legend (I’m talkin, sail as far as the wind will take you, roll up to a newfound land and leave with riches that double your whole net worth in one epic trip, legend), is married to Rhaenys who caught the crown stiff arm, and he and his family will play major roles in the Dance of the Dragons.

The Dance of the Dragons is the flowery name bestowed upon the savage internecine struggle for the Iron Throne of Westeros fought between two rival branches of House Targaryen. To characterize the dark, turbulent, bloody doings of this period as a “dance” strikes us as grotesquely inappropriate. No doubt the phrase originated with some singer. “The Dying of the Dragons” would be altogether more fitting.

And with King Viserys’s decision to name Rhaenyra his heir and send Daemon home to his wife, the seeds of Civil War were planted. We’re due for a time jump at some point this season, so it should be dope to see how revolution spreads.

7 Noticings Across the Realm

Ripped from the pages / Book differences / GoT connections

“In the Vale, the men fuck sheep. You cannot fault them. They’re sheep are prettier than their women” – Daemon Targaryen. Lifted right from WoIaF

Syrax: The name of Rhaenyra’s dragon pays homage to a Valaryian Goddess.

In the book it is Corlys’ son Laenor whos vying for votes at the Great Council, but It’s understandable why they’d change the offense to his mother since the boy was only seven and most of his merit was based on his father’s wealth.

Did you notice Rhaenyra and Alicent walking through the same room that Cersei paints the map of Westeros on? The painting of that room always felt powerful and strategic minded to me, so I appreciated seeing it again.