type in your search and press enter
189 Shares

STOP THE BAST DAM PRESSES. Kendrick and SZA just embraced every single aspect of African aesthetics, black excellence and hip-hop royalty to create the first video off the Black Panther album droppin on Friday, February 9th. Ladies and gents, the wait is over. “All the Stars” is out and good LAWD is it outstanding!!!

THAT INTRO?!? Kendrick coasting across the elongated hands, arms and backs of so many black, brown and X colored peoples?! Symbolic on so many levels. The children surrounding him in such amazing and authentic African garb as he gets transported to Africa via all the stars!? Sheer Beauty. THEN SZA SWAGGERING THROUGH THE ASTROLOGICAL VISUALS WHILE CROONING THE CHORUS AND EFFORTLESSLY BUSSIN MOVES?! Just gorgeous.

When the verses get underway, Kendrick spits molten hot lava atop rooftops akin to so many poverty-stricken villages across Africa. His lyrics sizzle as dancers destroy every notion I ever had of tribal dances when they break it the fuck down in Chuck Taylors like it’s nothin! He drops bars as men sit and stand around him in the finest suits and linens. Maaaaannn this video is heroin for thine black eyes. The turquoise and blue hues would make that opera singing alien Diva from The 5th Element jealous. The reds, yellows and greens exude a celebration of African flair, artistry and pride. The gold!!! The original color of royalty! The scene where he walks through the dead forest with the Black panthers all around him!? Powerful.

Then King Kendrick walking up to the 4 deities, all in the image of strong African women!! Let me just stop myself right here cuz I could go on for days! Kendrick. SZA. “All The Stars”. Everything about Black Panther so lit and we’re extremely lucky to behold such a genuine rapper get this album-curating opportunity. Kendrick has found a way to continuously push the envelope and stay true to his roots and beliefs. This video right here just put everyone on notice. Black Panther will be Black AF and the album does not plan on cutting any Wakandan corners, fam. 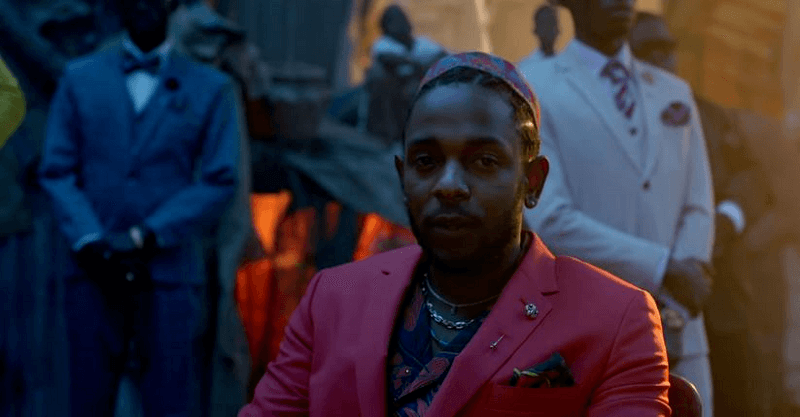