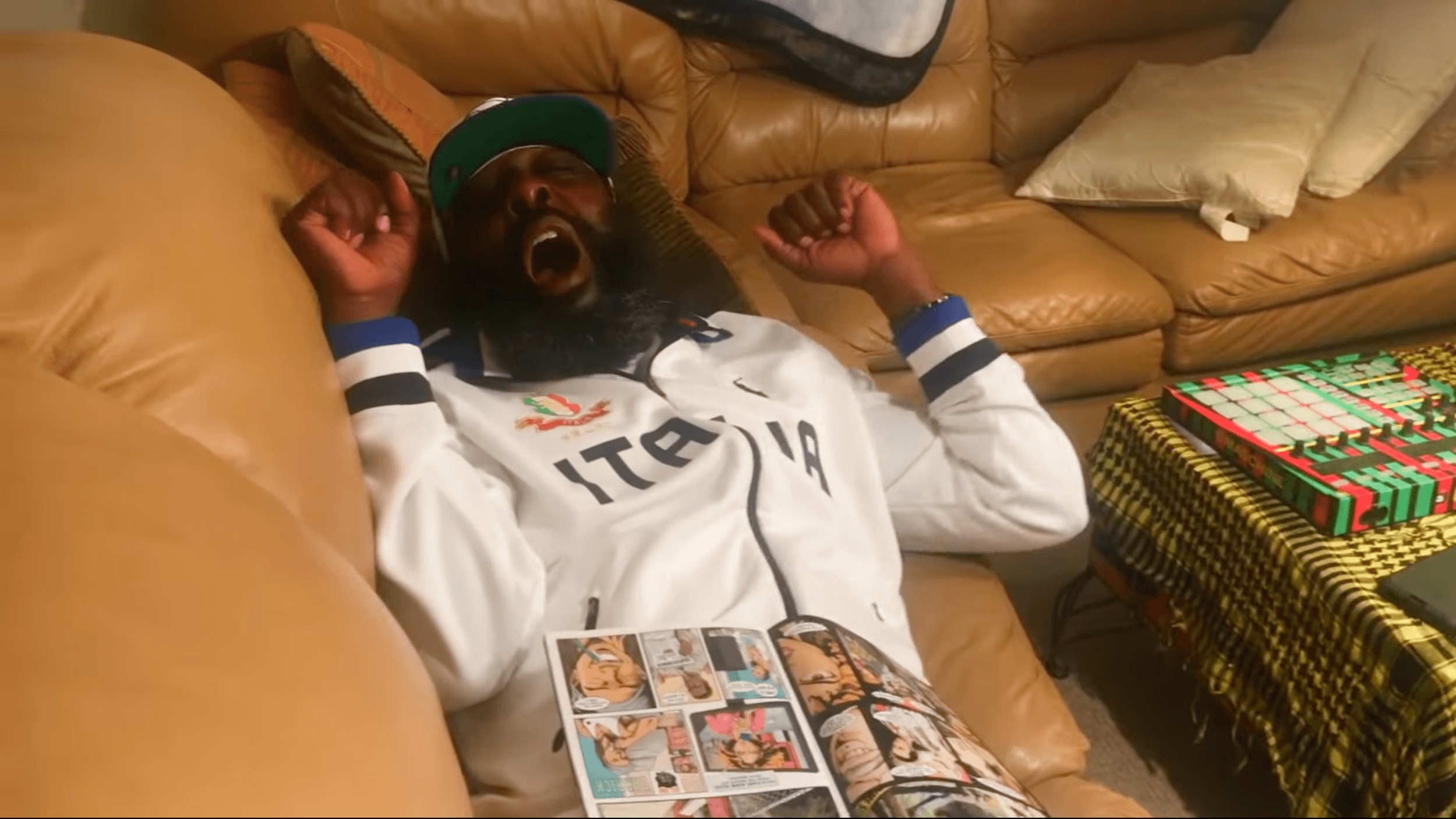 I’ve said this once but loving saying it repeatedly, hip-hop as a genre and an art form invited pop culture to the cool kid’s table. Lemme say it again, Hip-hop gave nerd culture and fandom a safe space to exist. There’s even a subculture of hip-hop called nerdcore. Personally, I believe hip-hop emcees/rappers deserve more credit for the way they’ve incorporated nerd culture. The Last Emperor is one of, if not the main artists that deserves that credit. Whenever I talk about the examples of an emcee letting the nerd flag fly on a hip-hop track, The Last Emperor’s Secret Wars tracks are always my first reference. My man had emcee battling comic book characters. That’s fucking genius. The Last Emperor even has an entire espionage-based track called Echo Leader that has an entire espionage theme running through the song. Don’t tell me hip-hop don’t go for this nerd culture shit when Last Emperor out here doing work. So imagine my surprise when I found out he was still doing that work with an entirely new album, Lord of the Fly.

Listen, I was minding my business googling why beavers build damns when my friend Ingamar sent me the Lord of the Fly album to listen to produced by Haak Filmore and said, “The Last emperor is a dope rapper who makes star wars references and other nerdy shit and it reminded me of you.” When I read the name Last Emperor and saw this was an album release in 2019, I screamed. It was a scream of excitement as well as one of anger at not having caught wind of this album sooner. I had plans of working out and being productive later on that day. I take pride in telling you none of that shit got done because this The Lord of The Fly consumed my whole day. When I tell you that I needed this shit right here? Yall don’t fucking hear me. When I talk about the intersection of pop culture and hip-hop, this Lord of The Fly album is shit I’m talking about right.

Enter: The Last Emperor and Haak Filmore’s Lord of The Fly

The title for the first actual track on the album is “From the Dead.” This theme is genius, as Last Emperor comes on the track saying, “Rise. Rise. Rise! Provoke the townsfolk to run for their lives // Emcees run from the rhymes that I’ve said like classic movie monsters back from the dead”. For the entirety of the track, he talks about coming back into this rap shit as an underground rapper back from the dead. Mans is back from comic book limbo to get back on the mic. Ever the storyteller, The Last Emperor makes you feel like the townsfolk got the pitchforks and torches out due to his return. He makes references to classic movie monsters like The Black Lagoon and The Baskerville Hounds without it ever sounding forced while managing to work in Star Wars and X-Men references. Haak Filmore provides a beat that feels like a modern take on a classic movie monster score. It’s eerie yet hard as fuck and melodic all at the same time.

The Last Emperor has a song on the album titled “16” where he counts (and in the music video cosplays) as The Count from Sesame Street and mentions the other characters from the show. It’s a fun display of being able to manipulate 16 bars of a rhyme scheme. “Time Bandits” is a song where he runs with the theme time travel throughout the entirety of the song. I think the track where he has the most fun is possibly “Top Cat.” The Last Emperor embodies the Hanna-Barbera cartoon character Top Cat as speaks from his POV. You can tell The Last Emperor isn’t taking himself too seriously and is having fun…but at the same time this song still fucking goes. The beat from Haak Filmore sounds great as well. It has this 70s alley cat feel (if that makes sense) that matches the vibe perfectly. Haak actually foreshadows so much of these songs with the beat. Once you hear it you can tell the type of vibe that he and The Last Emperor are about to take us on. Haak is the perfect producer for The Last Emperor as each beat is like the perfect alley-oop for the emcee to play dunk however he sees fit.

I had so much fun listening to this album and then suddenly one track changed the whole mood and reminded me how hard this nerd shit can bang when implemented with some imagination. Man, this track is tucked away like an easter egg and it’s so smart. I was cruising along till I got to track nine and heard “Phantom Zone!” repeated on loop as part of beat. Mind you, the beat we are talking about is from Mos Def’s/Yassiin Bey’s track “Beef.” Yall don’t hear me, Haak Filmore fucking remixed Mos/Yassin’s “Beef” track with Phantom Zone repeated over the beat drops. I fucking put my hand over my mouth and said, “No. There is no way! They not doing a whole track about The Phantom Zone from DC Comics. Yes. The. Fuck. They. Did. If yall not familiar with the Phantom Zone, lemme break this down so you can see why this shit fucking bangs. The Phantom Zone is a pocket dimension that exists outside of time and space. It was discovered by Jor-El, the father of Superman. As the death penalty was done away with eons ago, the worst criminals of Krypton were sentenced to the Phantom Zone as a more humane punishment. Prior to this, criminals sent out in orbit off-world, put in suspended animation and had crystals placed on their foreheads that wiped away their criminal tendencies. Once in the Phantom Zone, inmates enter a ghost-like state of existence where they can observe, but cannot interact with, the regular universe. Inmates of the Phantom Zone no longer need air, food, or sustenance either.

The Last Emperor uses the Phantom Zone throughout the entirety of the song as a reference for where he’s been imprisoned due to his abilities as an emcee. Fam, my man said, “For war crimes, and raw rhymes, and battling // I’m sentenced to be next to the worst criminals in the galaxy.” COME. THE. FUCK. ON. I knew it was game over soon as I heard that bar, man. Last Emperor is such a vivid storyteller but not only that, he’s so fucking committed to the story he’s telling that his passion and imagery become infectious. Not only that, he knows what the fuck he’s talking about as he states, “I’m in a cell for giving them pure hell // sentenced by Jor-El and the council of 12… to the Phantom Zone.” The Last Emperor rapped his ass off so hard on this that I’m convinced this man did a bid up in the Phantom Zone. I feel the Phantom Zone, much like his “From the Dead” track serves as a metaphor for The Last Emperor’s career as well. The Last Emperor’s last mixtape was in 2009, before his Jungle Jim Season 1 mixtape in 2018. Lord of the Fly is his most recent project since 2019. Mans is rapping with true earnest of someone that’s been away in limbo and is back to show he’s still that fucking guy in hip-hop. It’s a narrative within a narrative, and I fuck with it so heavily. I may be reading too far into it but with lines like, “Instead of selling records tryna play me back they rather send me to a cell next to Brainiac.” Come on man, I feel mans talking it like he been living it.

“Phantom Zone” is easily my favorite track with lines like, “Now I should state for the record that I only exist as the black superman of Krypytonian myth. Go to war with a Firestorm and only get lit // and in the Green Lantern Corps is only where I only enlist.” And this line, “Dinner date with Doomsday, I been waiting all night // it’s on sight, I dropped Darkseid with a hard right.” This man is having fun all over this track, which makes this song so infectious. Haak Filmore is a genius for putting this shit together over the beat, man. This shit literally leaves me speechless. This is my favorite song from Last Emperor and just *rapper hearing a sick beat and ill verse growl* proves that, sure, there can be a subculture for nerdcore but hip-hop been had space for nerd fandoms to thrive. The Last Emperor has been thriving with this nerd shit in hip-hop for a good while. Each time I hear “Phantom Zone” it only solidifies that fact for me more and more especially when he closes the song out with the line saying,

My man is still in a league of his own with the content he makes in hip-hop. The Last Emperor deserves his flowers, now. Haak Filmore deserves his flowers for the production of this project too. Aye, where can we send a whole ass bouquet of tulips, roses, sunflowers, lilacs, and lilies to these two men? For me, Lord of The Fly serves as a nerd bible for those that are at the intersection between pop culture x hip-hop. Again, Last Emperor doesn’t drop these nerd references as soundbites. He finds a way to weave each one in so that it either makes sense as a reference or fits into the overall scheme/ theme of the song. Yall remember when J.Cole said, “‘Pac was like Jesus, Nas wrote the Bible“. For me, when it comes to this nerd shit being represented in hip-hop Last Emperor is still, lemme emphasis that, still… on his Moses shit, parting the waves to provide a space for these nerd bars, fandoms, and culture to make it to the promised land.

If you’re a fan of this nerd shit and hip-hop, I implore you. Give Last Emperor and Haak Filmore’s Lord of The Fly album a listen. It’s on Spotify and iTunes. This album is fun, clever, and most importantly a safe haven for those that get it popping across the nerd spectrum of pop culture.