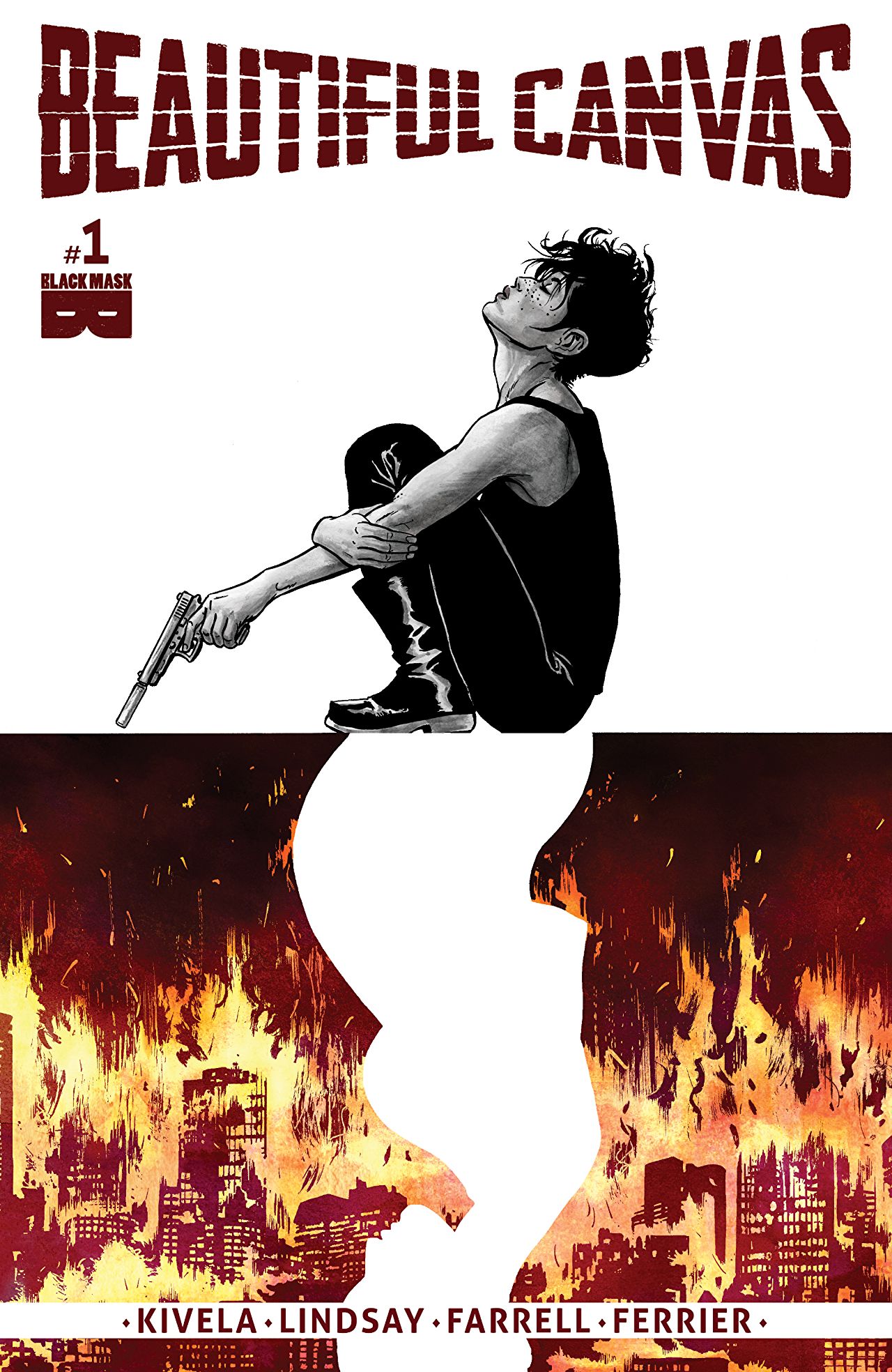 When I first saw preview art and such for Beautiful Canvas earlier on Twitter this month I was intrigued and added it my mental list of “Comics that look really awesome and I should really remember to make a note and not forget about them and buy them.” Beautiful Canvas #1 went on that list alright. And life always makes a way to make me forget about important things, which includes that list. Towards the end of the week, this comic went on sale, I remembered, bought it, and finally sat down to read. Let me tell you it has put Black Mask Studios on the map, and I’ll explain why.

Many readers are talking about the opening pages, but the very first to be exact: it is our protagonist, Lon Eisley, hitwoman, seated, having accomplished her job as her target lays on the couch very much dead. A bullet hole is in his forehead, her eyes are glazed looking up at the ceiling and blood and brain matter decorate the wall behind him. He’s very dead. Yet in the panels below, he tilts his head to her and simply says to Lon, “You’re overthinking it.”

It is a hell of an opening and proves to be as strong as the rest of the book. This is also a great glimpse into the head of Lon, who as a character is so on the fence about many things which include her profession, the side effects of that profession, and the fact that her girlfriend is now pregnant. She’s uncertain, but more or less present, and this is a superb example of what how she views the world. 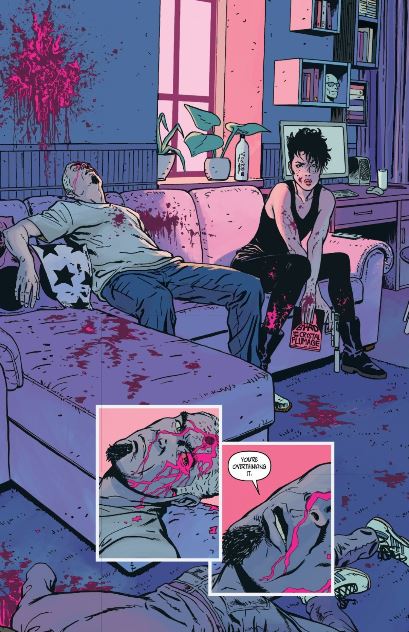 One of the best weapons that Beautiful Canvas has in its arsenal is the element of surprise, and that it is used in such a jaw-dropping way that the reader will see, feel, and totally experience it three times over through the art, coloring, and of course, the story. Perhaps the biggest example is Lon, after killing her mark, is greeted by a small child who I’m assuming is the son of the eliminated target: 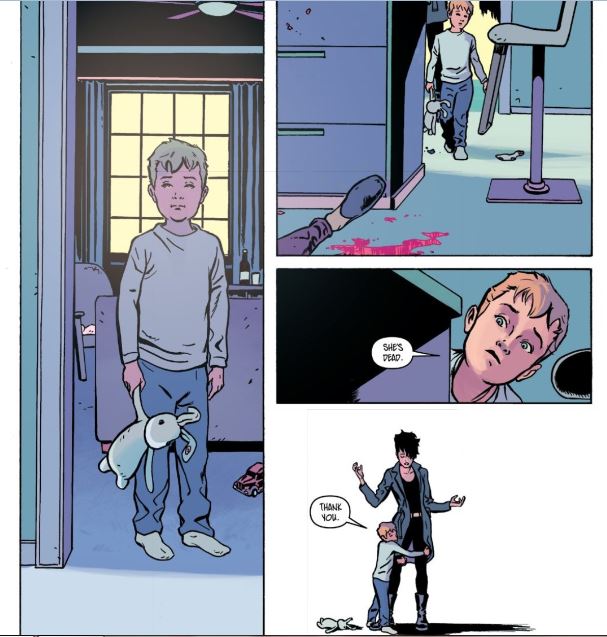 Wow. What is we talking? What are we doing? What’s going on?! Truly nothing is what it seems, and around every corner, you’re being surprised and thrown for a loop in this book. Kudos, Ryan K Lindsay, on the writing because you are keeping me guessing and I love it. Other great examples are whenever Lon’s boss has a scene (I know she’s Queen Bee in this universe. She kills it every time she opens her mouth, and of course the other intricate details of the Hitwoman-Hitman/Underground world).

The first action sequence in which Lon encounters conflict and she has to make use if her gun is very short, but also very effective in showing you 1) Lon is good at her job and quick with her hands, and 2) artist Sami Kivelä masterfully pulled this short burst of action off using one entire page and it’s a testament to an artist who knows their way around some damn panels. Throughout the book, Kivelä is manipulating panels and cutaways to really maximize the action scenes and ensure the pacing is good enough for the scenes with more emotional weight. He also has a really solid art style that helps keeps the reader stay invested visually.

Triona Farrell though!? Triona Farrell?! Beloved, believe me when I say that she does the fucking work here. As the colorist, Farrell does phenomenal work on this issue, and it is all very striking and bold when it needs to be. Even the pages where it is more mellow (see the second image from the book up above) aren’t over done. There are some interesting (read: very strange) characters that make an appearance near the end of the book, and they are just the way they need to be under Farrell’s dutifully skilled hands. I can’t stress this enough: when you have a colorist who knows what they are doing, your book will prosper. Farrell does just that. You don’t have to believe me, just look at her work.

I would be remiss if I didn’t mention Ryan Ferrier for the lettering for BC. I think it goes over many readers’ heads of the importance of the colorists and letterers of the comic book world. In the case of the lettering for a comics project I feel it is often overlooked cause in a such a visual medium the focus is on the entire product as a whole. The lettering which is one small part of all of that gets overlooked so for me it’s some I happen to pay attention to on my second read through of a comic: sound effects are key to enhancing action sequences. What lies inside word bubbles and thought bubbles can come across with different meanings. To take this further: I think it’s an artform within an art form: Ferrier has to gauge type face, letter size and positioning of where the word bubbles go and such in each panel. TL:DR? The work where you know a fight starts or when narration begins. The result? YES. Yes, it works. Yes it flows well with the book. Yes, it should be acknowledged. I tip my hat to you sir.

Back to the book as a whole: the narration gets a little muddy in the middle of this book, but it picks itself back up and on the tracks before the end for a near perfect story that made for a highly entertaining read. It’s the first issue of a new comic and we know that there is bound to be a cliff-hanger. No shade at all. Who was expecting this ending though? “Not I,” said the cat. Not I, said this reader and reviewer. Again, let me refer back to that element of surprise being one of the greatest weapons in this comic’s arsenal.

Beautiful Canvas #1 reads well and is incredibly well written. It looks fabulous. The coloring job is supreme. It comes across as a project that the creative team spent a long time collaborating on to make sure it became something great. Black Mask Studios, I see you. I see you, fam.

Beautiful Canvas #1 is a stunning debut. You need this in your life. Lastly, shout out to the gorgeous covers, not pictured is my fave, the Christian Ward variant: