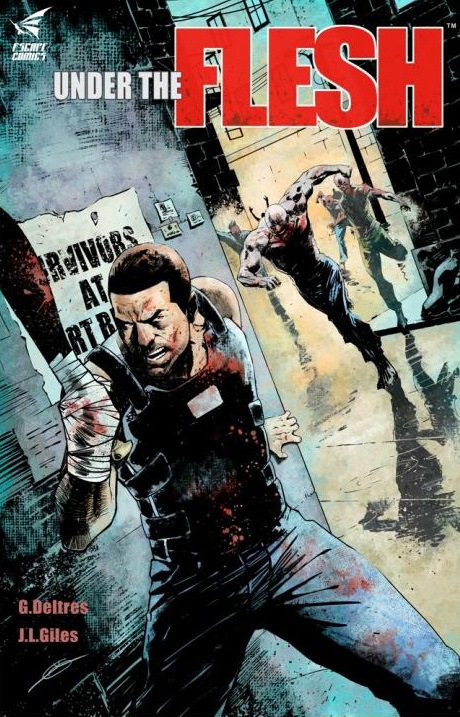 The world has gone to shit in a hand basket filled with grenades. At least that’s the case in Escape Comic’s Under The Flesh. There is a pathogen out in the world effecting only men. These “spooks” as they are called are like the krumping zombies from I am Legend on molly. They are enveloped into primal urges for hunger but also some sexual natures as well. We get a global scale disaster with characters in a lose-lose situation… unless of course we are talking about Lt. Ruben Lobos who got some special nanites in his body courtesy of Uncle Sam. Ruben isn’t aware of the full extant of his abilities yet but that’s where his machete comes into play.

Creator and writer G. Deltres gives us a quick run down of the sale to which our main protagonist is up against. We also see the crew he is holed up with which is predominately made up of women and only one other male. Tension, tempers, and time are running high as the group encounters contact another gang of humans. The decision about what to do gets taken out of their hands as that gang is attacked by spooks. We then get introduced to the outside world as Ruben takes off after his girlfriend who has run out on the group for reasons not yet clear. J.L. Giles is pretty gritty as fuuuuuuuuuuuck. I really get the “it’s all gone to shit’ feel as I read through the pages. My man is good on that violence like he got done playing GTA before putting the ink down.

We got a more visceral take on post-apocalypse America with Under The Flesh. It will be interesting to see how the team decides to world build as well as the other characters that will appear in the series.