Okay, let’s start with a little bit of truth: I’m not the biggest gamer in the world. Honestly, it may not be fair to call me much of a gamer at all. I own a Nintendo DSi in baby blue that I pre-ordered on a whim because from seeing a couple of cool commercials and a cooking game; I also own a few new virtual reality devices now (a huge come-up, if I say so myself) and I’m a self-proclaimed Afro Samurai beast. This summer, I fell in love with Google Cardboard. Man! Who knew my phone and a cardboard Viewmaster thingy could bring so much joy. Naturally, I couldn’t stop there. When I say I, I mean we, the girlfriend and I. It’s safe to say that bae upgraded my gaming life!

So we grabbed a Homido Virtual Reality headset from Amazon that can be used with both Android and iOS. The day after Christmas, I made the leap and swooped up that new Samsung Gear VR. What you’re about to get into is a novice VR gamer’s review of both the Homido and the Samsung Gear VR. I’m not including Google Cardboard much in this because I don’t think it would be fair. Let me say this, though — if you’re not much into VR yet and you want to be, spend $4.99 on a cardboard VR headset on Amazon, download the Cardboard app and get to it, boo!

You can use practically any smartphone with this head set. When I first played with it I was using my old iPhone 5s and the Cardboard app. There are a good amount of free games with this app, which is nice. The Homido is going to run you about $70. It’s not a Google Cardboard price, but the Homido is built for ease of use. The Homido, like the Samsung Gear VR, is a plastic headset with foam around the eyes for comfort and I’m assuming it also helps with the field of view. You’re pretty immersed into the games using the Homido. The head straps go both from ear to ear and are adjustable, and there’s also a strap to go over the head. This pretty much secures the head set and keeps it from falling off if you’re like me and go nose diving into simulations like you’re Katniss Everdeen. The Homido Virtual Reality Head Set does have a dial on the side that helps you to navigate the app and even use it as a game controller with choice apps.

If you are intensely into VR, you’ll have some fun, but Oculus isn’t standard with Homido’s own app nor does it power the Cardboard app. So, is the experience good? It’s great, actually, but it’s not grand. The dial is somewhat awkward for me and takes a bit of getting used to. I know that I said that I wasn’t going to talk much about Google Cardboard, but I have to mention it a bit here. The immersion into the game is cool with Homido, but it’s better with Google Cardboard. I still get the feeling that I’m not in the game, but sitting really close to a 36-degree movie screen with heavy 3D glasses on.

Overall, I give the Homido paired with the Cardboard apps a 3.75 out of 5 stars 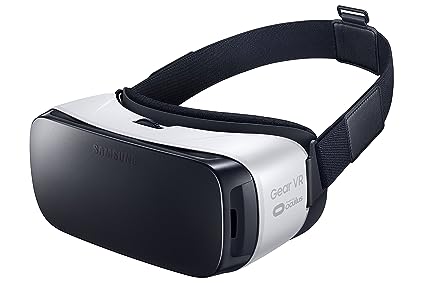 Like I said, I bought the Samsung Gear VR right after Christmas. It’s been all of the hype this past month or two with Samsung’s release of the new Galaxy S7/S7 Edge. I ordered the Gold Galaxy S7 Edge and let me tell you… *heart eyes smiley face* I love it! Back the the Gear VR…

The Samsung Gear VR is mostly white with a plastic body and so much “face cushion” (like my technical terms?) that it’s pretty comfy. It’s most compatible with the new Samsung Galaxy S7 or S7 Edge, but can be used with the Galaxy S6/S6 Edge and the Note 5. The Gear VR is powered by Oculus. This basically means that your VR experience is going to be pretty intense. Oculus is pretty much the god of virtual reality and the graphics are exquisite. Samsung gave away probably a bajillion Gear VRs to get them in the hands of folks and to persuade Oculus to release more games.

The field of view is top notch. Once this thing is on your head, you can’t see anything but what you’re immersed in. The Gear VR is also pretty lightweight and not too bulky. It’s a lot more comfortable for me than the Homido and the head straps make it hands-free for most games. The Gear VR does have a touch pad on the right side that works a bit like a controller. It helps you to navigate through the system. In order to play games, you do need to set up an account on your phone, but if you have the Gear VR, you own a Galaxy of some sort and Oculus either came full installed or you can just download it from the play store.

One of the coolest apps for the Gear VR outside of the gaming world is Netflix. You can watch movies in 4K Ultra HD! You also have the option of choosing your viewing background, so you can be in a movie theatre setting or a very home-like setting while watching. Paired with your head set, this is optimal if you’re a TV watcher before bed and your significant other is not. You’ll look a little odd with that head set on in bed, but hey… they’ll probably appreciate you keeping Daredevil and all of his ass-kicking to yourself while they catch a few z’s.

Oh! I almost forgot… there are quite a few concerts that you can attend and many places to visit. You can take virtual tours around the world (of course you can do this with Google Cardboard on the Homido or the Cardboard, too) and attend concerts. I went to (wait, virtually attended) a concert on the Gear VR and loved it. I was onstage watching The Fantastic Negrito (check out his Tiny Desk concert on NPR) perform and I was able to move to different sides of the stage and be a part of the audience. It was an actual live concert that had been filmed 360 and I loved every angle of it. Absolutely amazing. Don’t even get me started on Dreadhalls. That game is torturous. It’s too real. I can’t. I become nauseated thinking about it.

You must have a Samsung Galaxy S6/S6 Edge, Note 5 S7/S7 Edge in order to operate this. If you’re an iPhone user or have anything else, this sucks. If you have the Galaxy S6 or S6 Edge, your gaming time will likely be cut short because those phones tend to overheat quickly. The games can feel pretty limited due to Oculus holding out on the release of some and possibly due to your budget. These games are a pretty penny. We’re talking $7.99 and up. There are a few freebies, but they are mainly previews of games you’ll have to pay for, or little videos. They are constantly updating Oculus, so it may seem as if you are always installing and updating before you play, but it typically that means there are new games awaiting you. Also, with both devices… if you get motion sickness easily, beware. It’s easy to get a little queasy with in virtual reality, but thankfully, a lot of the games come with warnings.

I need, need, need to tell you about an app that can be used on the Homido, Google Cardboard, and the Samsung Gear VR despite your iPhone or Android use. That app is vTime!

vTime is changing the course of social media. With vTime, you are able to connect with people around the world, become friends (or not) and take trips! Yes, trips! With vTime, you can go to Paris or go ice fishing! You can float along a beautiful river with gorgeous mountains in view or hang out on a beach. vTime let’s you talk to one another, join trips, or host them yourself! You can even take amazing selfies.

When you set up your vTime account, you create an avatar. Now, there aren’t a lot of body shapes to choose from here, but I was happy with the skin tones. They have a little bit of work to do when it comes to the hair as well, but it’s all good. The first time I tried it, I spent two hours chatting it up with a dude from Germany, a guy in Peru, and a lady from India. I learned or re-learned a few phrases in Spanish and found out that weather in the UK is not so different from Ohio. Later on, me and the boo went on our own little date and toured a few places that I hadn’t gone before. There’s this rooftop diner in Paris that is beautiful.

The graphics are as close to real as possible and they other effects make up for the left over ‘cartoony’ feel. You hear the wind blowing in your ears and see it rustling the leaves. Bugs fly past and you may literally smack yourself trying to get that mosquito out of your ear. No joke! Please, if you are into VR, get on vTime. I love it. Hey, I’d even be willing to take you on a tour! Seriously. If you have friends across the globe that you don’t get to see or talk to often or if you miss having pen pals like you may have done as a kid, jump on vTime and get to meeting up in the most beautiful and wackiest places.