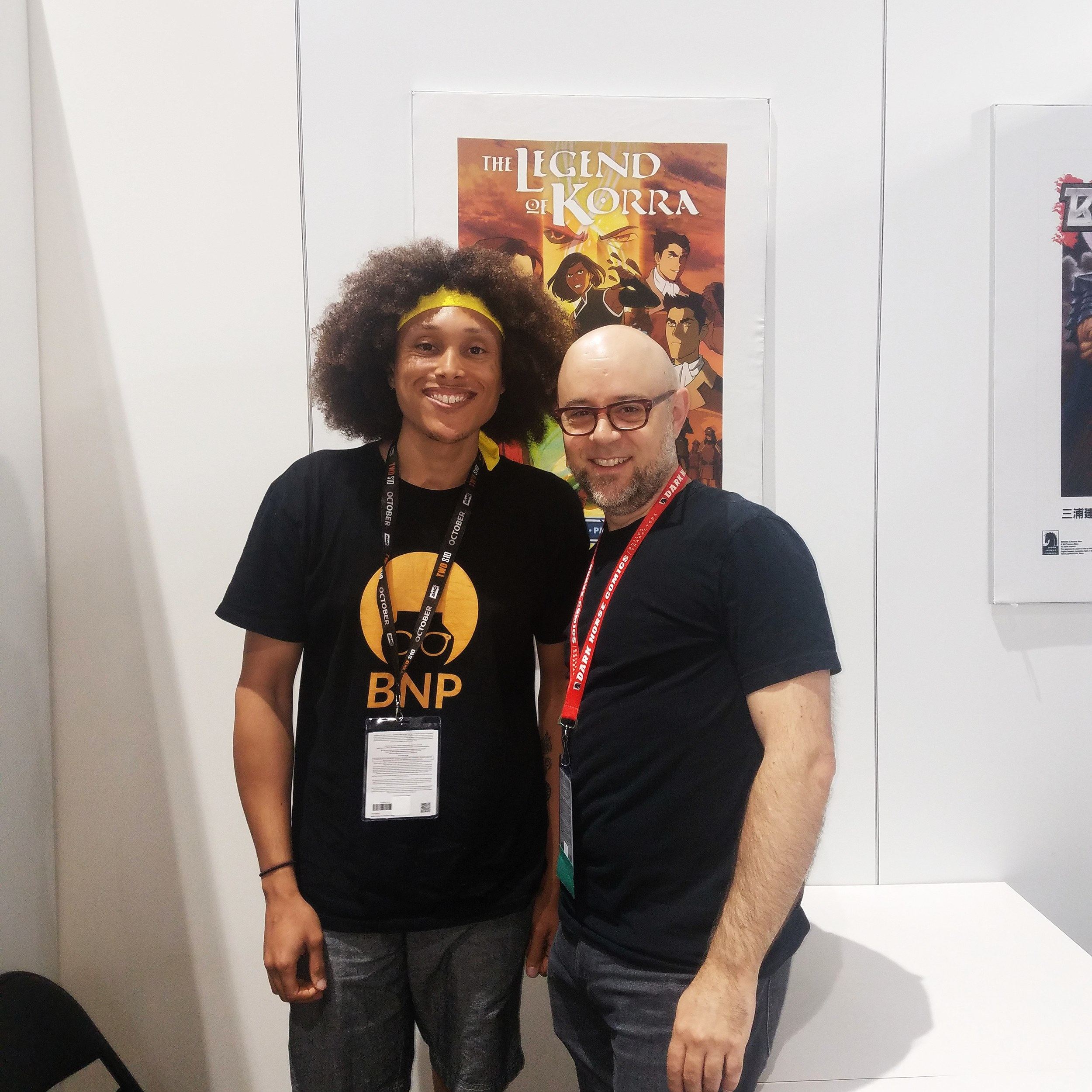 This past weekend at SDCC, I had the honor of interviewing Mike Dante DiMartino, also known as the co-creator of Avatar: The Last Airbender, and The Legend of Korra. This was huge for me, as Avatar was a staple of my childhood. Hell, it’s been a staple of my entire life. It’s a huge reason why I wanted to get into storytelling and writing. We talked a little bit about Ruins of the Empire, the second and current Korra comic published through Dark Horse that ties up some loose ends from Kuvira’s story arc from the end of season 4. We also touched on what it’s like to write your characters in different mediums, and the best ways to tackle world-building. So, with that being said, don’t expect any questions about what happened to Jet, how quick Aang’s hair can grow or how fast the spirit of the Avatar is reincarnated. Mike gave some really insightful answers to the deeper questions and if you’re a writer like myself, you’ll find them pretty invaluable.

Mike Dante DiMartino: Yeah, that’s a good question. In some ways, it’s similar. Like figuring out plot and character arcs and emotions and all that stuff is totally the same. But the storytelling medium is quite different because you can’t rely on movement. You can’t rely on sound effects or music or actors speaking the lines the way you imagine them. So there definitely was a little bit of a learning curve for me. Like, how do I translate what I’m used to writing for animation into panel by panel comic book things. So I felt like I got good experience doing Turf Wars. And I felt like once I got to Ruins of the Empire, I was like “Oh okay, I get how to do this now.” So I felt like the first one may have been a little clunky in some places because I had never written a comic before. But also, my past experience doing storyboarding for animation—I feel like that definitely helped bridge the gap, because I always think in shots or pictures. So I definitely use my writing past and abilities combined with my artistic skills. But yeah, it’s a balance. I just try to get a balance so that every page feels different.

BNP: Going back to some of the first Avatar comics like The Promise and The Search, I know you didn’t write those, but Gene Luen Yang consulted with you guys. Are any of the comics that have come out since then stuff that got left on the cutting room floor from the shows, or are they all stuff that you always intended to do in another medium?

MDDM: No, I mean when the show ended we didn’t have anything that we—I mean beyond like what happened to Zuko’s mom which everyone wondered about (laughs). That was like the one-story thing that we wanted to do at some point. It wasn’t like we had plotted out a whole bunch of stuff afterward. It was just like, this opportunity came up, and Gene brought a lot of cool ideas to the table. We had some ideas about like, “Alright now that the war is over, how do you actually pick up the pieces and rebuild these cultures and society and stuff.” We had general areas that we would want to explore but there wasn’t a lot of story that we had not gotten to in the show that we’d want to do in the comics. But for The Search, that was one we knew we wanted to do, but we didn’t want to do it like right after the show ended. So that’s why we did The Promise first.

BNP: So with Ruins of the Empire, what is it about Kuvira that made you want to revisit her for this arc?

MDDM: I found her to be one of the most interesting characters we had because she like started out with Su kind of on the good side, you could say. And then kind of steered the Earth Empire into a not so great place. And you saw glimpses of her remorse at the end of the series. So I just wanted to dig into that more, rather than like creating—I mean there is a new villain in this story named Commander Guan. And there’s still more to do with Korra, we’ve got lots to do with her. But we’re like kind of focusing on Kuvira as the main character in this story. Korra is still the protagonist and out there fighting for balance and all that stuff. But kind of the emotional personal story was much more Kuvira’s in this one. That’s what’s cool about the comics too vs. doing the TV show. You can pick one of the side characters and it’s now their story. 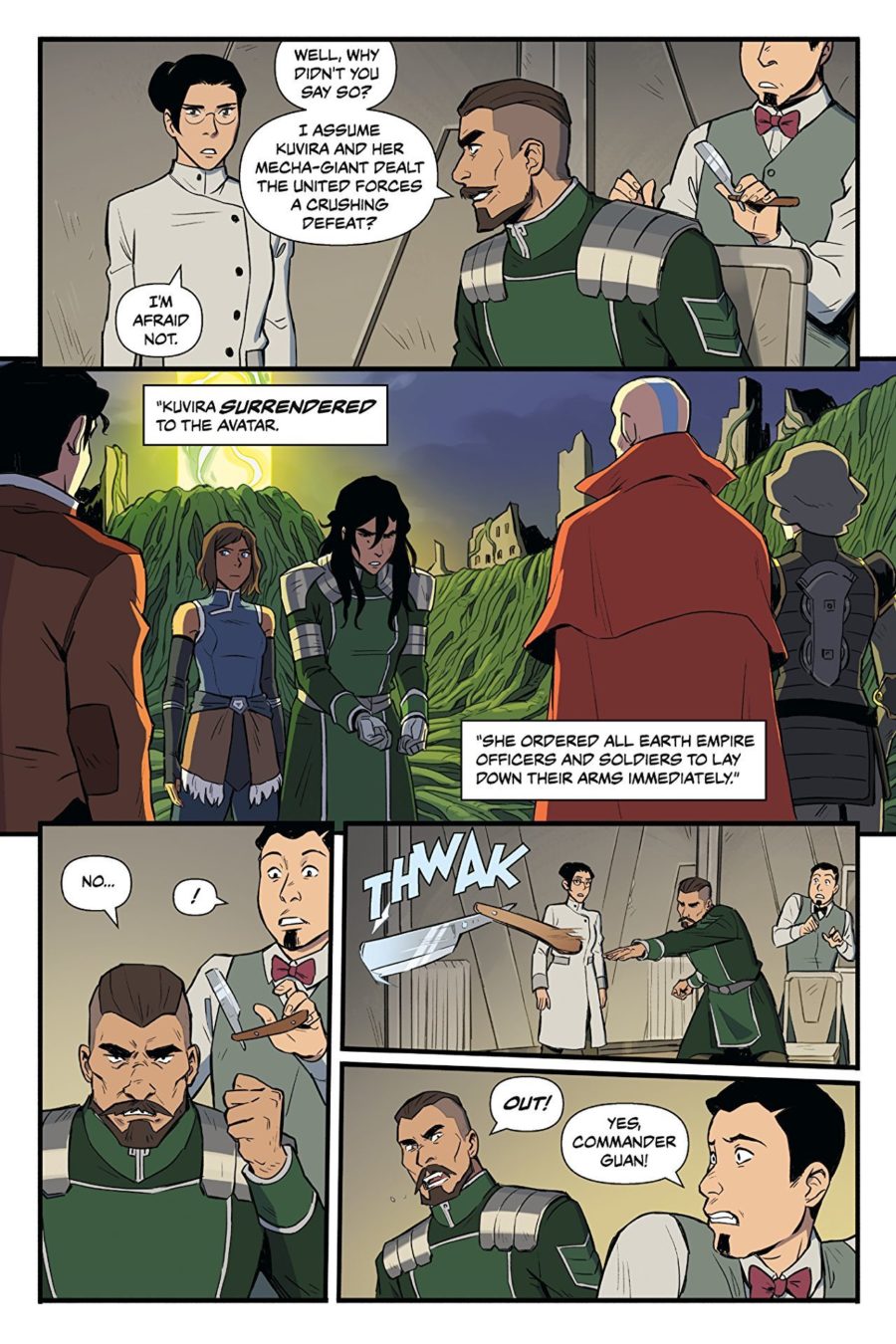 BNP: I find that shows and movies that are continued in other mediums like comics or novels can sometimes fall into the trap of just giving the fans whatever they want. I don’t think that the Avatar comics do that. But I also know that may not be the easiest thing to juggle. So in the spirit of balance, how do you manage to both try to make the fans happy while also trying to tell the best story possible?

MDDM: I think it’s been a challenge with the comics to make sure that each arc or each three-volume thing feels like its own story and feels like nothing that we did already in the show and it’s exploring a new aspect of the world or a character. For Ruins of the Empire, that was more like kind of wrapping up some stuff that was left like “What is it gonna look like when the Earth Kingdom actually tries to become a democratic society?” And “What happens after Kuvira gets sent to prison?” Because she has all these personal connections with people. 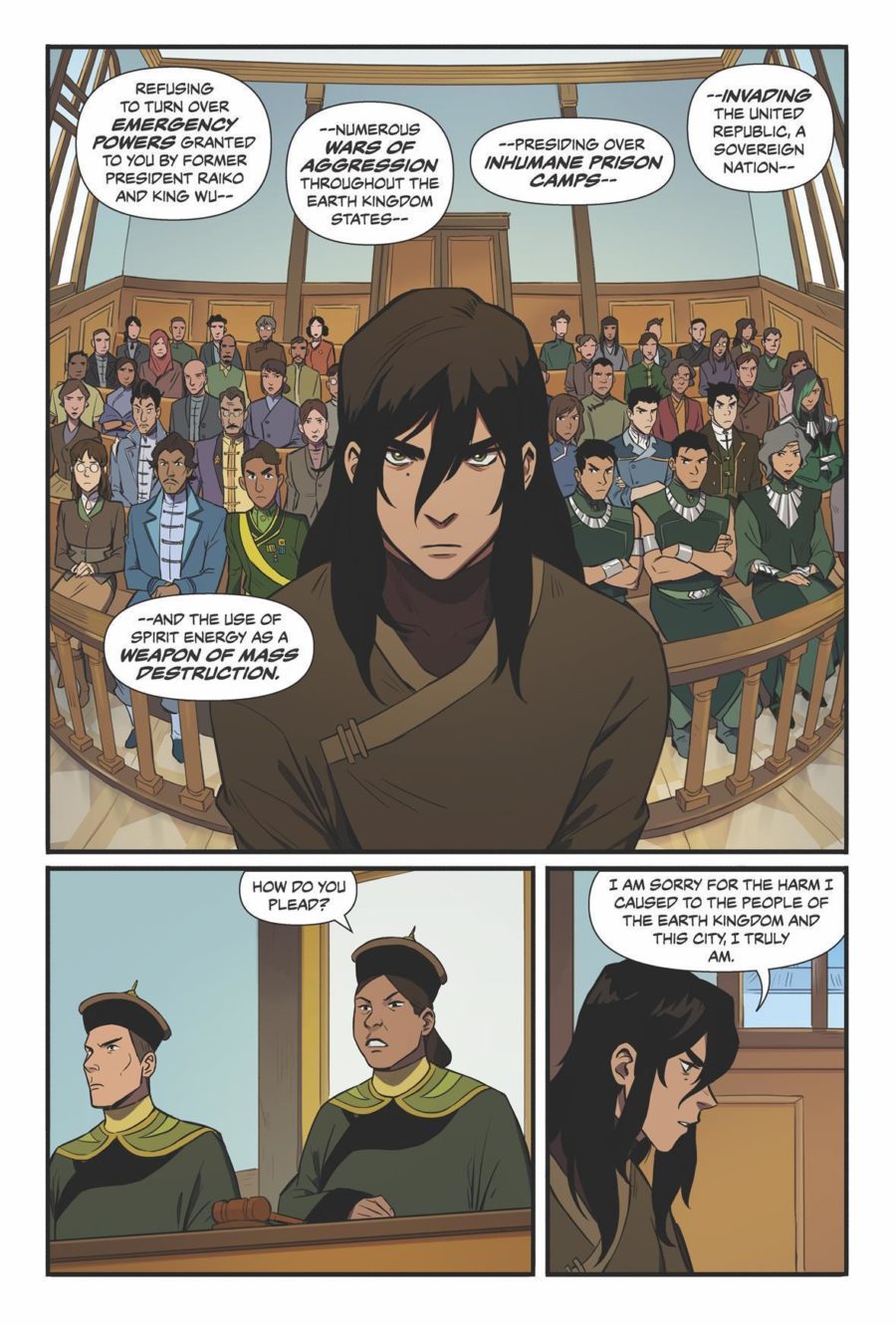 BNP: Do you have a favorite aspect of writing the comics that’s maybe different than what you like about working in animation?

MDDM: I mean I’m a big reader and I love books in general. Comics also. So just having like a physical thing that I can look at the pictures and see the characters and the word balloons and everything is cool. It’s just a cool medium. I really like challenging myself to tell stories in different—I mean it’s all storytelling but it’s different mediums. You have to figure out what does this medium do the best that another one can’t. So yeah, I feel like the comic I guess is a lot more of a personal experience because you’re sitting there with the book—with the artwork yourself.

BNP: One of my favorite things to do in general when I read is to try and find a score that matches the feel of the book that I’m reading. And with Avatar I can just throw on Jeremy Zuckerman’s score and I’m good. It’s dope because this music was made for these characters. So holding that comic and being immersed in that music definitely feels personal on the audience side of things as well.

BNP: So here’s a broader question. Out of the shows, and all the comics, who’s been your favorite character to flesh out from like the beginning to now?

MDDM: Zuko is awesome. Because he had lots of ups and downs. And a lot of stuff to learn. So he was a good character to dig into. And then I like Kuvira too. The characters that are like—I think it’s just more realistic when characters do good stuff and they do bad stuff. Like how do you reconcile that? They’re not just like all evil or pure evil. Even though the Fire Lord is arguably pretty evil (laughs). Even Aang couldn’t bring himself to—like his answer wasn’t just to just like kill the guy.

BNP: I’ve always loved how he was so conflicted with that. Because all his past lives and all his friends were telling him to kill the guy (laughs).

BNP: I’m pretty sure you’re aware, but like you know how like the different elements are almost akin to like zodiac signs or personality types now? Like in the real world? Have you seen any of that online?

MDDM: I actually haven’t but I’m not surprised.

BNP: So like for an example, at Black Nerd Problems, whenever someone new starts, they have to say what Hogwarts house they are and what element they rep.

BNP: So what out of the four elements do you think fits best with who you are?

MDDM: I’m so Airbender (laughs). And not just because I have a shaved head. But just like with trying to find balance and peace. Trying to respect people and all of that.

BNP: I think my mentality is more Airbender, but maybe some of my temperaments are more along the Earthbending spectrum.

MDDM: Well that’s the thing, we’ve all got pieces of it all!

BNP: So with the Avatar world being fleshed out as beautifully and seamlessly as it is, I was wondering if you had any tips for writers that may be trying to build a world that feels real but might find the task to be daunting when it comes down to making everything work.

MDDM: That’s a good question. I don’t know if I totally know how to do it (laughs). I think my advice would be like—when you’re starting out, people think like—I’ve gotta figure out every rule and every culture or like—just you think you have to figure out every detail of the world. Like, when we started out, we had to figure out the basics. What the magic is, what the people’s powers are. The conflicts, you know. But it’s more about who the characters are and why are they in conflict. I feel like you need a certain amount of the world-building, but you don’t need—it shouldn’t be the thing that hampers you from writing the story because like you’ll figure out that stuff as you write the story, and as you go along. And obviously we had other people contributing through all these years to the mythology but like—you know even now with like the Kyoshi novel—the writer F.C. Yee, he added like so much new mythology stuff that like wasn’t stuff that Bryan and I were like, “You have to put this and this”. 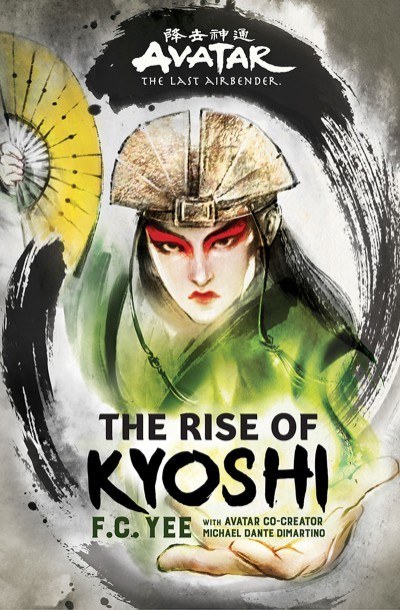 MDDM: It’s just like, you kind of make this cool sandbox, and then you know, stuff has to like make sense within that sandbox, but as long as you have a good template—it’s almost like coming up with a template. There’s four nations. There’s four elements. And then you can start digging in and get more specific as you develop the show or book or whatever it is.

The Legend of Korra: Ruins of the Empire Part One is available now! @rightstufanime reviewed it here: https://t.co/eboG4crMTH By Michael Dante DiMartino, @VViiNNG, @lokhelle.