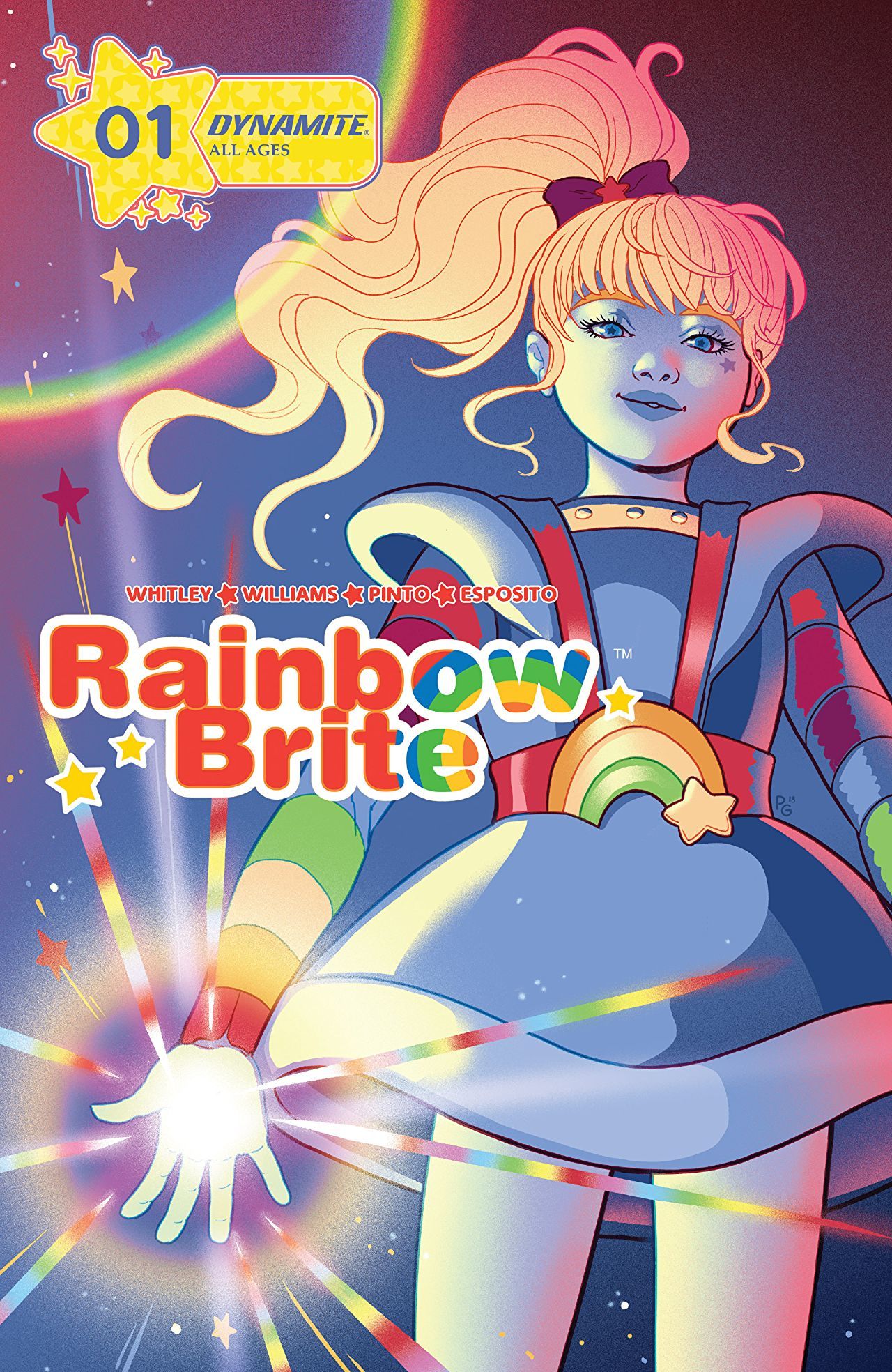 To start with a confession, readers: this humble reviewer holds only a passing recognition of Rainbow Brite. A cursory glance at Wikipedia, however, lists multiple iterations beyond the 1980s’ version of the character I’m familiar with. The question is: what distinguishes this recent incarnation — a Dynamite comic from their All Ages imprint — from previous ones?

Fans of Rainbow Brite could analyze the transition from cartoon to comic better than I. If I know anything about what fans value most in the reboot of a creative property, however, it’s how well each new adaptation preserves its original source material.

After reading issue 1 of Dynamite’s new Rainbow Brite comic, I’d suggest those picking up this comic on brand recognition alone might need to adjust their expectations accordingly. Regardless, every story has the potential to be someone’s first experience of a particular genre; and this would be a solid introduction to the world of Rainbow Brite.

Starting on a yet-to-be-introduced narrator, a fable is spun of heroes rising to face a menacing evil. The tale includes a few clever taps on the fourth wall before introducing the book’s true protagonists: two young girls named Willow and Wisp. Willow, our storyteller, has had her fan fiction fable interrupted by Wisp’s arrival outside the window of her room. 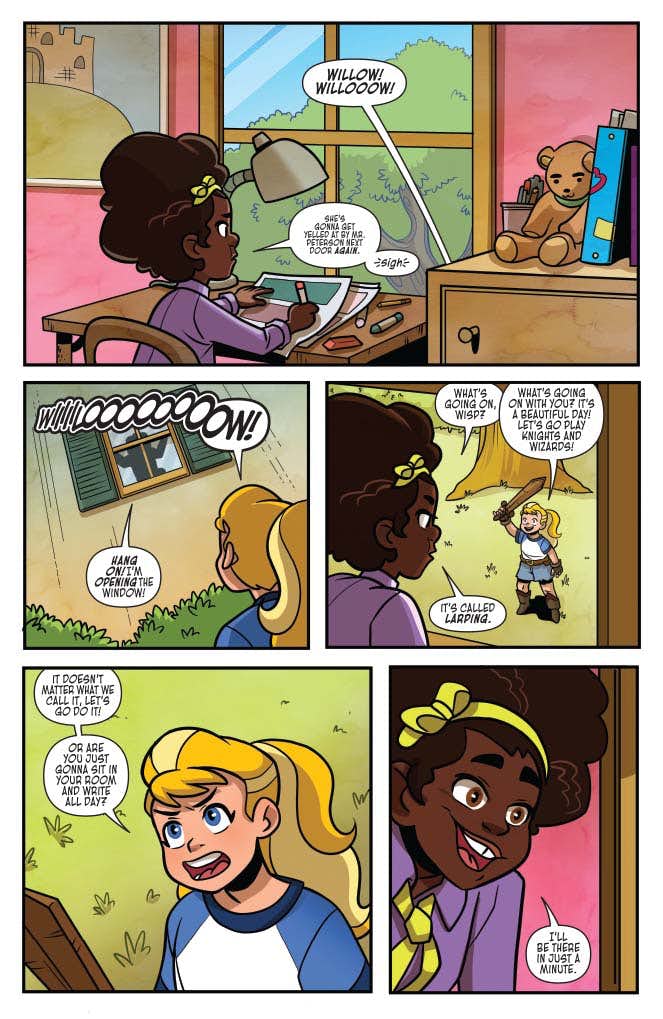 Together, the girls live out their legends with a pretend game of ‘Knights and Wizards’ (which is legally distinct from any other live-action role-playing you might be thinking of). Eventually, Wisp returns home after her day out, which is where her life takes a turn into fantasy that’s all too real…

From the outset, Rainbow Brite reads like a cartoon was pressed between its pages. Artist Brittney Williams has a background in character design and storyboarding. Colored by Valentina Pinto, the combined strength of their work resembles high-quality stills from the tie-in animated series this comic seems made to pitch for.

The cartoon comparison continues as this issue is structured like the first half of a two-part premiere episode. While it’s easy enough to discern the path being taken to introducing the title character, some might resent waiting for the reason they picked up a book with “Rainbow Brite” on the cover.

Jeremy Whitley’s writing moves the issue at a brisk pace. However, Whitley and Williams cut their teeth on all-ages fare elsewhere (The Princeless series and Goldie Vance, respectively, which come highly recommended as well). The result is all the characters are instantly readable. 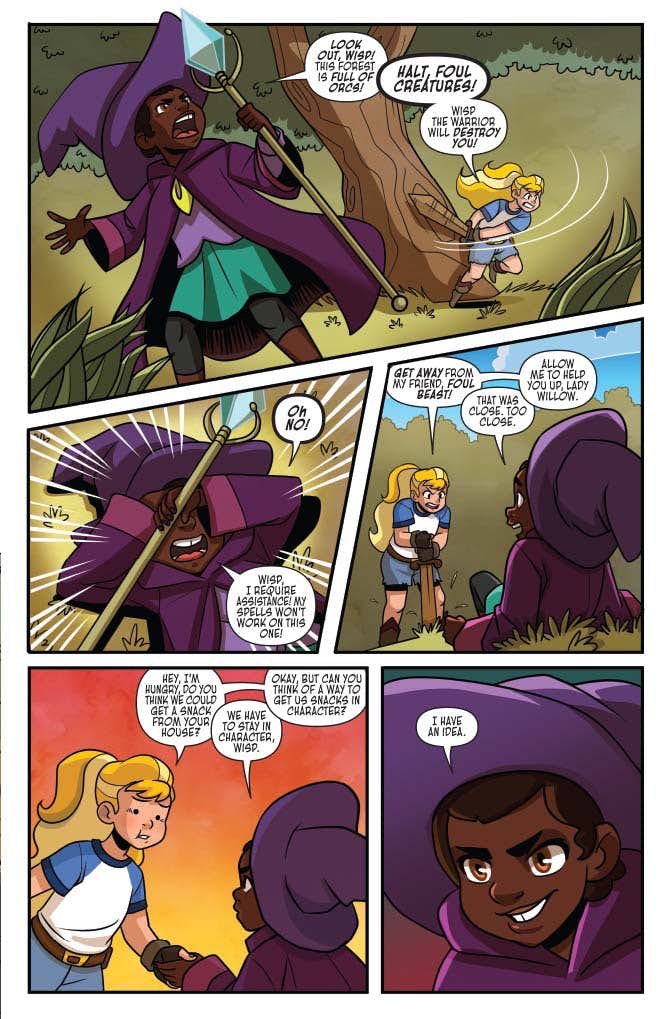 Wisp herself gives off a “Kelsey of the Creek” vibe, but of special note is Willow and her family. When the origin story of Rainbow Brite leads with a black girl breaking from her fantasy comic to put her homemade mage hat over her natural hair and argue about Live Action Role Play with her friend, the moment is remarkable in how normal it is. She’s not a sidekick, but a precocious nerd raised by supportive, wryly humorous parents.

By the last page, this comic made for an entertaining prologue to a property that I had little knowledge of. I envy the children who have this book put into their hands — especially once the full story is released and collected. Here’s hoping many more enjoy this re-introduction to Rainbow Brite, and the talents shaping her world.

3.5 out of 5 Fearsome Warrior Ladies