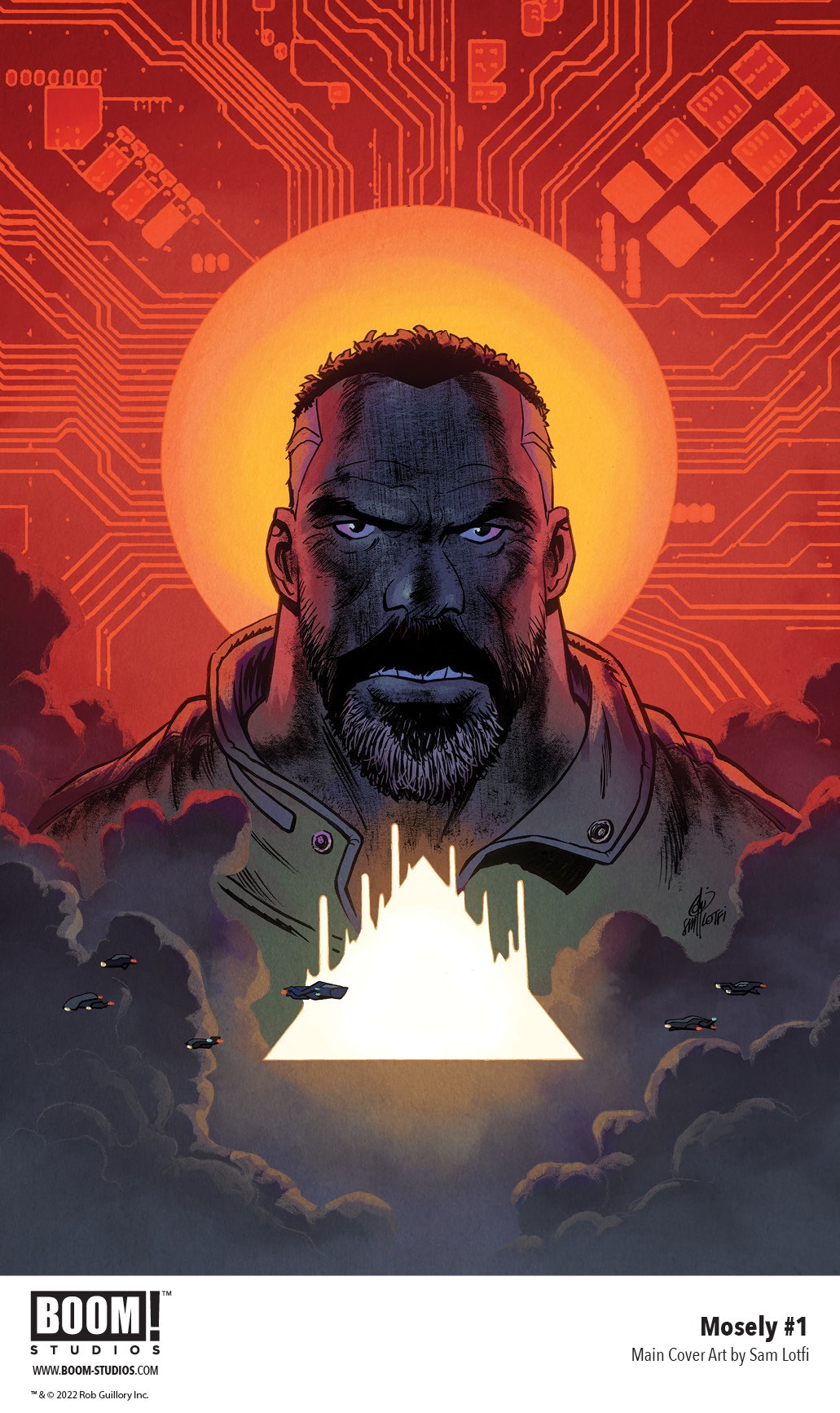 Back in October 2022, we had the fortune of getting to provide an exclusive announcement about the latest series from Boom! Studios by Rob Guillory and Sam Lofti: Mosely. Our titular character is an elderly janitor armed with an indestructible hammer and a fire in his belly ready to take down all of the 2075 Tech Gods. And now, we have had the fortunate to sit down and get some more insight into the series and creative process.

BlackNerdProblems: I personally have been a big fan of yours ever since I picked up the Smorgasbord Edition of Chew. What has the transition been like going from being a comic artist on Chew, to being the writer/artist on Farmhand, and now being just the writer for Mosley?

Rob Guillory: It’s been educational, that’s for sure. Even back when I was on Chew, I was noodling with scripts with the intention of making the jump to writing down the road. Farmhand was the natural next step for me, taking on both ends of the creative process. And I probably learned more from that experience than anything else I’ve done. Obviously, doing everything myself gives me maximum freedom creatively, but there’s something special about sharing the load with a collaborator. So that’s where Mosely came in. It’s the one thing I hadn’t done, writing for another artist, and it’s been far more enjoyable than I imagined. So, in short, I love all three creative methods, and I’ll definitely do all three again down the road.

BNP: What was impetus for penning a story about an anti-technological janitor rebelling against the technological gods?

Rob: Having kids, probably. Navigating the many pitfalls of tech just wasn’t something I’d ever considered until our first child started reaching for our phones. Now our oldest is 11 and teaching him to responsibly use these devices is still a hard slog. So Mosely came out of my frustration with the state of things, that I have to constantly contend with this damn black mirror that’s always trying to drop things into my kids’ minds I’d rather protect them from. Mosely is what I’d like to do with my kids’ tech on certain days, what I’d like to do to all tech after a bad scroll on the Internet.

BNP: Your stories have a semi-satirical/cartoony bent to them while still managing to have a hard edge when it comes to commentating on society. How do you manage to transition between these modalities while still being tonally consistent?

Rob: It’s just how I think. It’s not something I deliberately set out to do. My influences have always been somewhere between Looney Toons, Mad TV, and the Twilight Zone, so my work tends to come out that way. I love the expressiveness of cartoons, and more often than not I think life is pretty cartoonish on its own. My work just turns it up to 11, I think. I always set out to make the kind of work that I’d enjoy reading.

BNP: Your credits include a wide variety of genres ranging from horror, fantasy, noir, and science fiction with Mosely. How do you manage navigating these genres that have very different conventions and visual cues?

Sam Lotfi: I enjoy all the genres you mentioned, and the art should not only tell the story visually, but make the reader feel something about the story. I like the creative challenge of making subtle changes to my art to best suit whatever genre I’m working in. I look for those different conventions and do my best to bring my own take to them; hopefully, it feels genuine and pulls the reader into the story.

BNP: Related to the above, what genre has proven the most time-consuming?

Sam:  It would have to be science fiction because in order to make it feel like a believable world you need to invest time into designing all the important elements of that world before diving in.  I also like to make sure I leave room for spontaneous creativity on the page, so I don’t design everything in advance, just the key elements and I let that inform whatever I do spontaneously on the page.

BNP: Your website has some fantastic pencils/inks illustrations. Do you prefer working with physical medium or utilize it alongside digital art tools?

Sam:  For comics, I like to do layouts digitally since that’s where the most changes take place, but once that’s done, I prefer to scale them up to 11×17 and print them out in light blue so that I can pencil and ink traditionally.  Digital tools are amazing these days and I use both depending on the project, but I still love the tactile feel of paper and ink and all the happy or not so happy accidents that happen on the page while creating something.

Double Trouble with The Duo

Rob: There’s an “Alas, Poor Yorick” moment early on in the issue that Sam handles beautifully, where Mosely is silently regarding this broken robot in a janitor’s closet. It’s a very small touch amid a ton of great moments in issue one, but that one sings for me. It’s perfect. No dialogue at all, but it says so much.

Sam:  Page 7 panel 7 – We get a glimpse into Mosely’s current life and a sense of how he wants to change things.  Mosely is literally stepping out of his office/janitor’s closet and leaving all that mess behind, but symbolically it speaks volumes; especially when we see where the story takes him later on.  I love injecting subtle symbolic character or story cues whenever I can and even if it goes unnoticed, it doesn’t really matter, because hopefully it still gives the reader a feeling or sense of something when they see it.

Sam: I’m more of a fantasy/horror guy, so I’d say the technical design of the world and robots is probably the most challenging part for me.  The most enjoyable however, is whenever I get to draw Mosely smashing stuff with that big hammer or when he gets pummeled by enemies, both are fun to draw.

BNP: What do you hope your readers will feel after reading the first issue of Mosely?

Rob: Satisfied, but hungry for more. I want every issue to feel fulfilling to the reader. No fluff, just good story.

Sam:  I hope they’re drawn into the world and feel they can relate to Mosely and hopefully want to see more!

BNP: What would your chosen implement be for dismantling a future technocracy?

Rob: Solar flare, if I can arrange it.

Sam:  I’ll be honest, I’m not the most tech savvy person, so I tend to get a little impatient when tech doesn’t work as it’s supposed to.  There’s a reason I designed a giant fist into the already huge hammer, so yeah, definitely Mosely’s hammer!

Thanks again to Rob and Sam for taking time to talk.

Grab your copy of the first issue of Mosely at your local comic shop, Boom! Studios website, or Amazon when it comes out January 4th.