Mooncakes is one of the most satisfying stories, and most certainly one of my favorites, to come out of comics in the year of 2019. I say this as someone who has been a fan of both Wendy and Suzanne for years, following their work from Tumblr to Twitter. The opening Letter to the Readers sketches out the history of this book: “Mooncakes began on the eve of separation, in spring of 2015, as Suzanne was preparing to move back to Chicago and Wendy remained in New York. Our creative partnership became a way to keep our friendship alive and thriving, the space where we could connect across the country”.

This graphic novel is a reunion for the two and a project that thrived under circumstances that kill many relationships. For those who have followed each incarnation of their world, including Walker and Xu’s earlier version, opening Mooncakes feels familiar, like a piece of home. For new readers and new fans, this will be greatly loved and bookmarked after settling in for a chapter or two. From popular webcomic to a published graphic novel, Mooncakes is a treat for those wanting a heartfelt and engaging read of rekindled feelings and fighting for everything important to you.

Home in Chicago and MOONCAKES is out in the world. I’m thrilled to share it with you all and that I got to go on this journey with @AngrygirLcomics . Thank you all SO MUCH for all your support, it has meant the world to us!! pic.twitter.com/eKEv7KAHzV

Mooncakes is a story about family and witchcraft, about demons, werewolves and all manner of the supernatural. It is also about two friends and how their lives change when they cross paths again. Nova Huang and Tam Lang, once childhood friends, meet again when Tam is in need of protection from the dark forces gathering around their hometown. Nova is a teenage witch who spends her days studying magic and helping out at grandmothers’ spell book shop. When the sun goes down she investigates the things that go bump in the night. It is on one of these fateful trips in the woods that Nova comes across Tam, her childhood bestie now a werewolf on the run.

Walker has written a layered story about family: how their expectations can smother us, how distance can be a blessing and ultimately how our families can be messy, complicated collections of people. However, the narrative additionally lends an ear to how people can define their family ties on their own terms and how support systems are vital, especially in the lives of developing young people. Nova is fine at home with her grandmothers while being aware that other family members have big opinions on how she should be living her life, and that bothers her.

Yet she has stability and two grandmothers that love her and will support her till the wheels fall off. Tam, on the other hand, can count her fam on less than one actual hand and has been craving stability and warmth after a turbulent childhood. Sidebar: I just feel the grandmotherly love from Nova’s two Nanas–I sincerely wish we all had nanas like Nova. (Also, WLW for the win!!!!) The world would be a better place if we all lived with the amount of affection that spills out from the pages featuring them. I LOVE THEM! I LOVE THE NANAS! 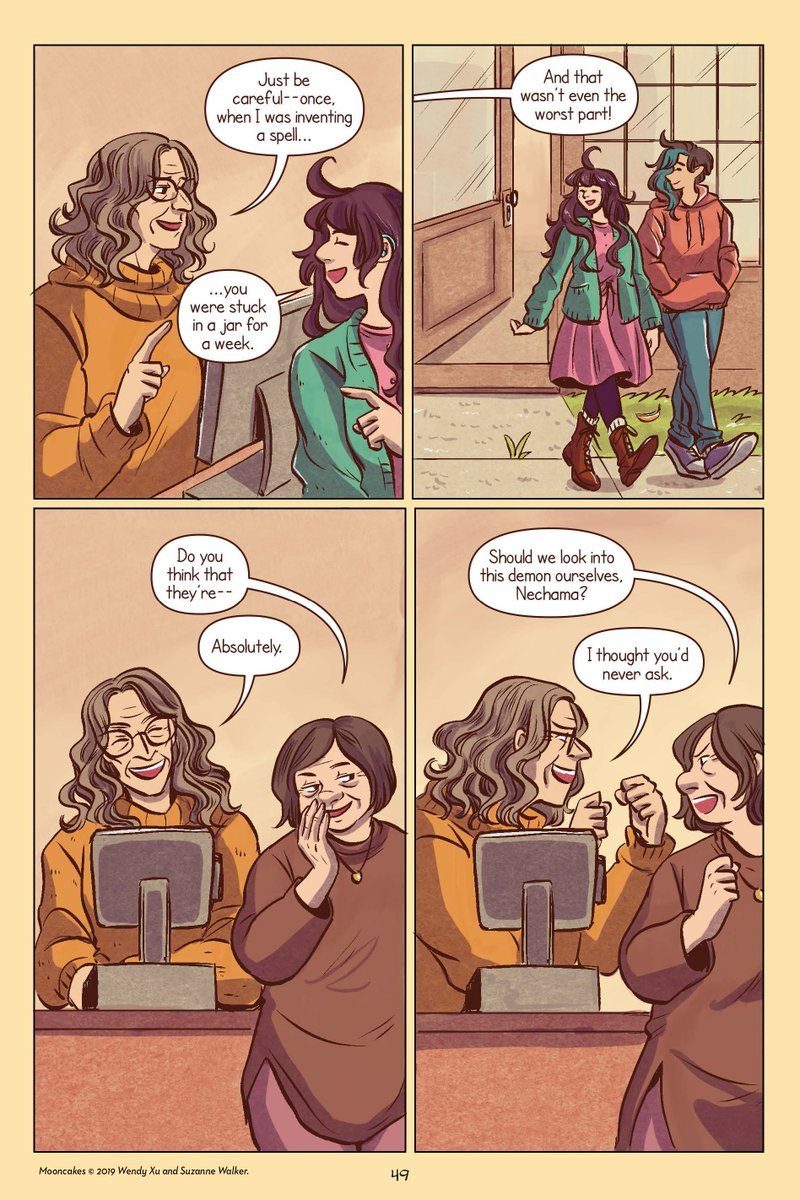 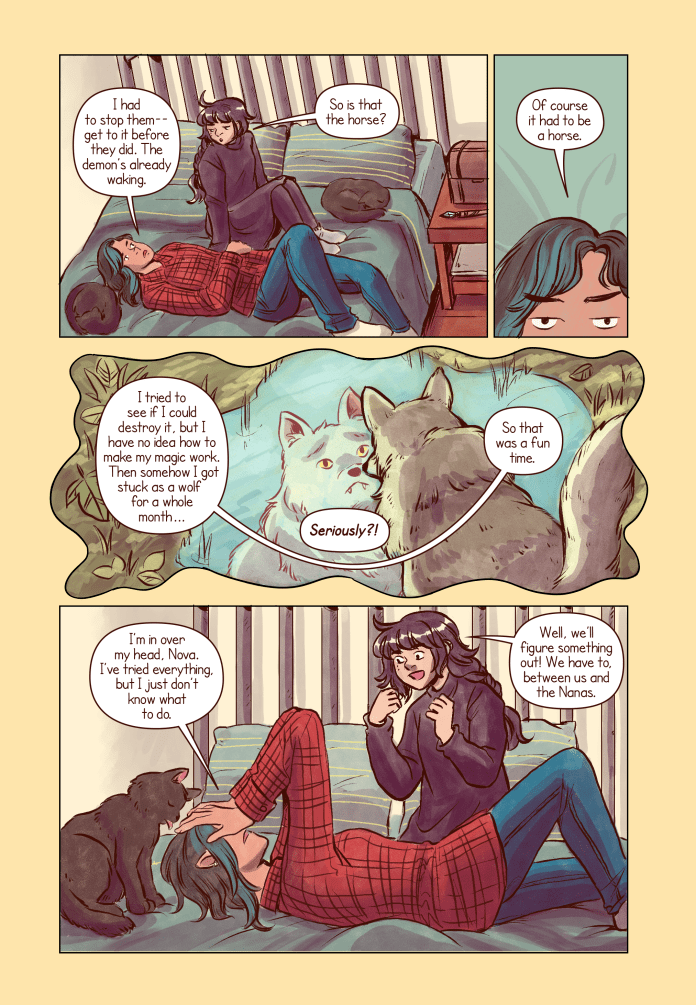 One of the biggest plot threads of Mooncakes is how being different or how being born in unconventional families doesn’t and shouldn’t set a person up for heartbreak — we are all capable and perfectly fine to be loved, protected and befriended. It hits the mark. Nova and Tam are two Chinese-American queer folks navigating the paths that their lives are taking. Their identities don’t define them nor this story but only flesh out these two, lovable characters.

Nova is hard of hearing and uses hearing aids. This doesn’t make me feel sorry for her, but lends a hand in making her ingenious nature stand out, especially when she uses them in a daring scene to take down enemies. Nova having a disability doesn’t clash with her being incredibly headstrong, strategic and book smart. It just goes hand in hand with that. She’s a fiercely protective and a super responsible person you’d want on your team.

Tam is non-binary. This doesn’t make me feel uncomfortable but adds to the ever-increasing number of folks in comics and graphic novels who choose a different and valid way of presenting themselves to the world. Tam is more than their non-binary-ness, they are a shy, withdrawn person who comes alive with people they trust. Their bad puns and dedication to righting wrongs — they help put an end to the growing conspiracy against their kind that hunts others — seats them as a relatable, believable person with strong convictions.

Saturday morning reading magic. My 12 year old is rereading #Mooncakes by @AngrygirLcomics and @suzusaur for the third time, made a wand, and says that she likes Nova’s hearing aids because “it’s a bit like me having an (insulin) pump, show it in the photo”. #ReflectingRealities pic.twitter.com/kJGa7xAnvG

Wendy Xu’s artwork encases a rich and vibrant world that emulates ours. Mooncakes is full of magic that enhances the lives of those who can see and experience it. Our tale takes place in a New England town with a well-knit community where witches are free to live their lives. It also ends up being a bed of supernatural activity, some of it more nefarious. Addressing this requires teamwork by all community members. There’s a ton of really fun things to see in Xu’s art, including everything from spells books — some that fly and some with teeth — or a silly t-shirt Tam wears that seems to be referring to a current meme.

Xu’s coloring adds another layer to her gorgeous artwork. Whole pages stand out with such clarity and grace like the one where a forest is welcoming kind witches. The details in the various looks of different spells both good ones and those who do harm is stunning. There is a beauty to the care of how night time scenes look with certain characters walking about, being tender with each other. The care that went into the appearance of guests from other planes of existance as they attend family functions is eye candy for sure and it really adds to the emotion and significance of the scenes.

Lastly, I’d be remiss if I didn’t mention the fine lettering from Joamette Gil who has been quietly working at lettering all the best projects in the indie and smaller press comics world. I’m really happy to see her name on yet another book. Letterers are crucial to good storytelling as they help make sense of all the illustrations, text and speech balloons that come with the territory. 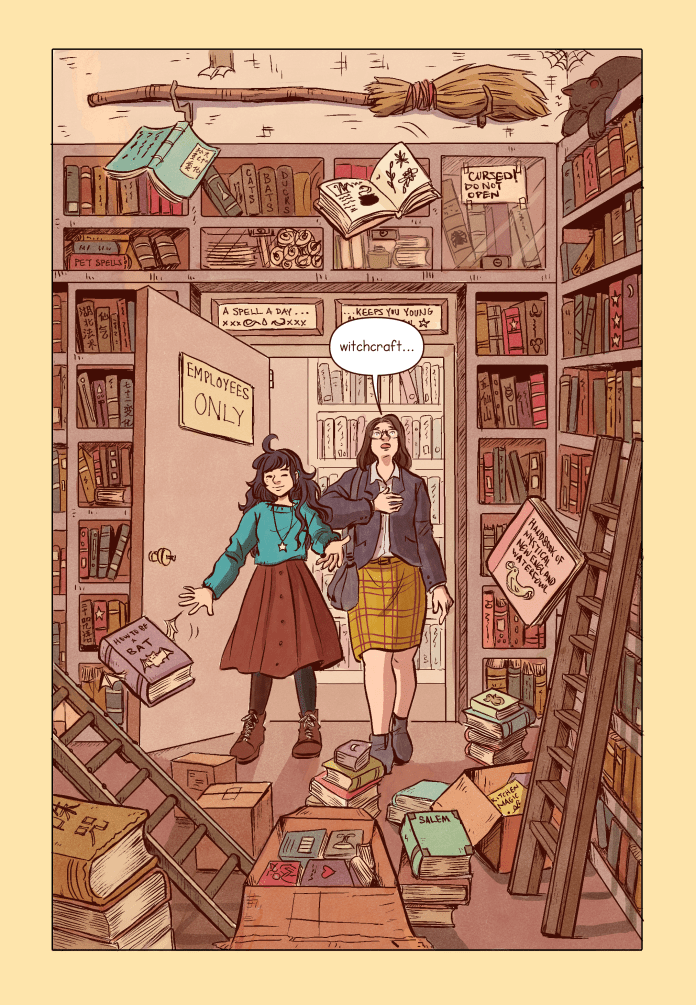 Mooncakes was everything I love and more. Real talk: Mooncakes is heartwarming AF. It’s true. It’s darn true. Walker and Xu’s work is one of my favorite graphic novels this year.

Do you want YA? Do you want LGBTQIA friendly? You want a graphic novel centering non-white protagonists? You want a paranormal romance with rekindled friendships, adorable forest creatures, unexpected homecomings, and a big showdown? You want Mooncakes.

See more about Mooncakes from Lion Forge at Lion Forge.com.

Suzanne Walker is a Chicago-based writer and editor. She is co-creator of the graphic novel Mooncakes with artist Wendy Xu. Her short fiction has been published in Clarkesworld, and she has published nonfiction articles with Uncanny Magazine, StarTrek.com, Women Write About Comics, and the anthology Barriers and Belonging: Personal Narratives of Disability. She has spoken at numerous conventions on a variety of topics ranging from disability representation in sci-fi/fantasy to the importance of fair compensation for marginalized SF/F creators. You can find her posting pictures of her cat and occasionally yelling about baseball on Twitter: @suzusaur.

Wendy Xu is a Brooklyn-based illustrator and comics artist with three upcoming graphic novels from Harper Collins. She is the co-creator of Mooncakes,. Her work has been featured on Catapult, Barnes & Noble Sci-fi/Fantasy Blog, and Tor.com, among other places. She currently works as an assistant editor curating young adult and children’s books. You can find more art on her Instagram: @artofwendyxu or on Twitter: @angrygirLcomics.